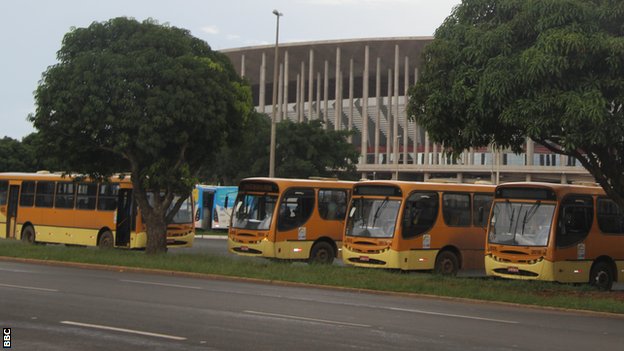 That’s what I call a goody bag! Football Association dragged into Fifa controversy over £1million worth of watches handed to World Cup nations
Fifa’s ethics committee have confirmed the acceptance of the £16,000 Parmigiani Fleurier timepieces

Telegraph Sport was seeking a response from the FA on Thursday as to whether any of its officials took home a goody bag distributed by the Brazilian Football Confederation in June to commemorate this summer’s World Cup and which contained a watch bought from one of its sponsors.

According to the UK’s Mirror, this is the watch:

Why did Qatar win the bid? FIFA isn’t telling:
FIFA Investigator Wants Report Made Public
Michael Garcia, the former U.S. attorney in charge of investigating the bid process for the 2018 and 2022 World Cup, on Wednesday said he wants his report to be made public.

FIFA hired Garcia in 2012 to investigate the bid process, which generated much controversy after Russia and Qatar won the voting to host the next two World Cups. Garcia delivered the report to FIFA’s ethics judge Hans-Joachim Eckert earlier this month.

Qatar beat out bids from Australia, the U.S. and Japan to host the event in 2022 despite temperatures of up to 120 degrees Fahrenheit in the summer. Since that vote in 2010, Qatar has been dogged by allegations that it secured the outcome through a series of secret deals. Organizers of the Qatar bid have repeatedly denied any wrongdoing.

Will they move the tournament to a season when the temperatures are not as high?

IS QATAR THE FOREMOST SUPPORTER OF THE ISLAMIC STATE’S SUNNI JIHAD?

In other Qatar news,
Qatar quits basketball over headscarf ban

If chosing [sic] Qatar as a World Cup finals venue was bad, Russia’s tournament in 2018 offers a recipe for disaster
Best way of halting Russia expansionism is not travel sanctions – it is the threat of stripping it of World Cup

The more we find out about them, the more delightful the hosts of the 2022 World Cup finals sound.

How endearing is the way they treat their workers – dying in their dozens in death traps masquerading as work places. How refreshing their approach to those who ask questions – at least two journalists have gone missing in Doha in the past six months after attempting to investigate the working conditions of those tasked with building World Cup stadiums. How enlightened is their foreign policy – Qatar is a sizeable financial sponsor of the Islamic State thugs as they go about their business of forcefully returning Syria and Iraq to the Stone Age. What fun it is going to be playing games with them. How relaxed and carefree. And that is before we even mention women’s and gay rights. Or the heat.

There is one thing, though, to be said in favour of Qatar. And it is not an insignificant virtue. At least it is not Russia.

After seven years of planning, $14 billion (more than three times what it cost to put on the 2010 tournament in South Africa) and 31 days of competition, this:

FIFA president Sepp Blatter says Brazil may have been wrong choice to host 2014 World Cup
Weeks after the protests in Brazil that marred the Confederations Cup, Blatter conceded ‘if this happens again we have to question whether we made the wrong decision awarding the hosting rights.’

After World Cup, Brazil Asks: Was It Worth It?

June Job Creation in Brazil Below Forecasts
Brazil generated 25,363 jobs in June, below most forecasts and the worst performance for the month since 1998, the government said Thursday

Russia’s the next host: Russia insists finishing stadiums not a problem, and hey, as hosts, they don’t even need to qualify.

Argentina and Brazil go to the World Cup semifinals, and that has been the top story all over the hemisphere.

Murder verdict over Argentina bishop
Two former senior military officers in Argentina have been sentenced to life in prison for the murder of Bishop Enrique Angelelli in 1976 during military rule.

World Cup police cooperation leads to arrest of fugitive from Argentina’s ‘dirty war’
Salvador Siciliano, a leading member of the notorious Triple A anti-communist death squad in the 1970s, captured in Brazil thanks to heightened communications between international forces around the tournament

BOLIVIA
Bolivia sanctions child labour as young as 10
Bolivian congress passes laws that allow 12-year-old children to be employed in full-time work for others, with 10-year-olds permitted to work if self-employed

CUBA
Putin to visit Cuba and other LatAm nations

ECUADOR
NYT editorializes with this headline, Government of Ecuador Can Sue Fugitive Bankers in U.S.

JAMAICA
Jamaica selling out its paradise

MEXICO
New Telecom Rules in Mexico Clear Senate Hurdle
Mexico is near to completing its biggest overhaul of the telecommunications sector in more than two decades.

The telecom bill is a tough blow for Mr. [Carlos] Slim. It forces mobile unit Telcel to complete calls from competing networks without charge, and establishes that domestic long-distance charges made by Telmex will be phased out starting next year. The bill also gives powers to the new enhanced regulator to set some phone rates of dominant players.

PANAMA
Venezuela restores ties with Panama
Relations were broke off after President Maduro accused Panama of joining the US in an “open conspiracy” against him.

PARAGUAY
Animals Take to Rooftops to Survive Floods in Paraguay

PUERTO RICO
Puerto Rico: The New Detroit
Puerto Rico is moving to restructure a large slice of its debt. More trouble could be on the way. And, Mercado Libre is the eBay of Latin America. But it has a new competitor: eBay itself.

The week’s posts and podcast:
Guatemala: When The Mountains Tremble to be corrected

Today’s update on the immigrant invasion

Obama to heal illegals with $2billion

For us not-fans, the World Cup drags on forever, but it’s only on its third week. The half-time verdict Expectations were low. They have been exceeded

“They installed a huge stage right in the middle of Copacabana beach to watch #CHI beat #BRA Is it possible..? Yes we can !!”

U.S. District Judge Thomas Griesa in New York has ruled that Argentina can’t pay holders of its restructured debt without also paying more than $1.5 billion to a group of defaulted bondholders, raising the possibility of a new default as the South American nation approaches a June 30 payment deadline.

COLOMBIA
Pablo Escobar’s hippos: A growing problem. Jaime Bayly interviewed his former girlfriend. They did not talk about hippos:

The Vatican has defrocked its former ambassador to the Dominican Republic, an archbishop from Poland who was accused of sexually abusing boys while he served as the pope’s representative in the Caribbean nation.

The former archbishop, Jozef Wesolowski, 65, is the first papal nuncio known to have been removed from the priesthood because of accusations of child sexual abuse.

IMMIGRATION
Top Border Control Official: The US Is Now Part of the Smuggling Business

PUERTO RICO
A Band-Aid for Puerto Rico
Legislation was passed to provide a mechanism to restructure the debts of Puerto Rico’s so-called public corporations.

URUGUAY
Take a bite out of crime? Mujica strongly supports Suárez and blasts FIFA: “they went too far”
Uruguay’s president Jose Mujica blasted FIFA’s Thursday decision to fine and suspend the country’s main scorer Luis Suarez from any football activity for four months arguing the association that rules world football measures things with different rods, and since Uruguay “is a small country, it’s cheap for them”.

The week’s posts and podcast:
Argentina: Boudou’s voodoo may land him in the hoosgow

Did you know the IRS employees are unionized?

Apparently he didn’t keep himself up-to-date on the latest most-wanted posters:

“He was low-profile and used real documents to enter the country because he thought that nobody was looking for him,” said [Luiz Cravo Dorea, head of international cooperation at the Brazilian Federal Police].

Jose Diaz-Barajas, 49, was attempting to board a flight to Fortaleza, where Mexico was due to play hosts Brazil on Tuesday night, when he was arrested at Rio de Janeiro’s Tom Jobim airport on Monday.

He entered Brazil over land from Paraguay (surprise surprise!) on June 11.