The unemployment rate fell to 8.2 percent, the lowest since January 2009. The rate dropped because fewer people searched for jobs. The official unemployment tally only includes those seeking work.

Well, at least they didn’t say it was “unexpectedly.”

UPDATE
The big March jobs miss — and why the real unemployment rate sure ain’t 8.2% (h/t Instapundit)

as the U.S. Economy Shows No Job Growth. Worse yet,

Data for the previous two months were revised down by a total 58,000 to show payroll increases of 85,000 jobs in July and only 20,000 in June, the government report showed.

The unemployment rate, which is obtained from a separate household survey, was unchanged at 9.1% last month. About 14 million Americans who would like to work can’t get a job.

And the average private-sector workweek fell to 34.2 hours from 34.3 hours, a sign of a greater slowdown in activity than economists had expected.

The results were worse than expected. 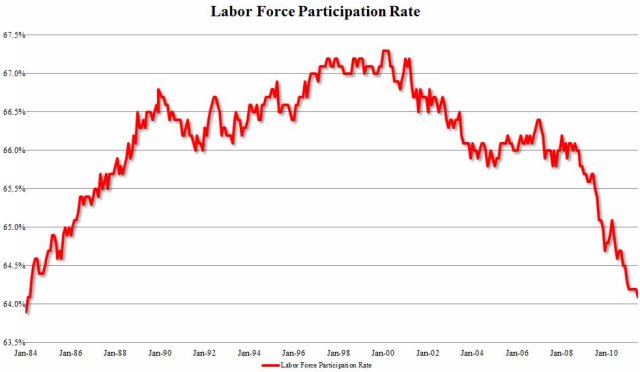 Meanwhile, U.S. debt crisis might be on fast track.

It was the ninth consecutive week that claims were above 400,000.

Sales of U.S. new homes unexpectedly dropped in July to the lowest level on record, signaling that even with cheaper prices and reduced borrowing costs the housing market is retreating.

Purchases fell 12 percent from June to an annual pace of 276,000, the weakest since data began in 1963, figures from the Commerce Department showed today in Washington. The median price of $204,000 was the lowest since late 2003.

A lack of jobs is hurting Americans’ confidence, leading to a plunge in home demand that threatens to undermine the one-year- old economic recovery. Builders are also competing with mounting foreclosures that are forcing down property values.

I don’t know what it will take for the news agencies to realize that The US economy is in a 1930s-style Depression, but at least CNBC ran an article on that:

Positive gross domestic product readings and other mildly hopeful signs are masking an ugly truth: The US economy is in a 1930s-style Depression, Gluskin Sheff economist David Rosenberg said Tuesday.

Writing in his daily briefing to investors, Rosenberg said the Great Depression also had its high points, with a series of positive GDP reports and sharp stock market gains.

But then as now, those signs of recovery were unsustainable and only provided a false sense of stability, said Rosenberg.

Rosenberg calls current economic conditions “a depression, and not just some garden-variety recession,” and notes that any good news both during the initial 1929-33 recession and the one that began in 2008 triggered “euphoric response.”

“Such is human nature and nobody can be blamed for trying to be optimistic; however, in the money management business, we have a fiduciary responsibility to be as realistic as possible about the outlook for the economy and the market at all times,” he said.

The 1929-33 recession saw six quarterly bounces in GDP with an average gain of 8 percent, sending the stock market to a 50 percent rally in early 1930 as investors thought the worst had passed.

“False premise,” Rosenberg said. “And guess what? We may well be reliving history here. If you’re keeping score, we have recorded four quarterly advances in real GDP, and the average is only 3%.”

Ed Driscoll asks, What’s the Second Coming of FDR Without a Depression?

Ironically, that’s not exactly the shock it’s supposed to be.

Go read the rest of his post to understand why.

New U.S. claims for unemployment benefits unexpectedly climbed to a nine-month high last week, yet another setback to the frail economic recovery.

Initial claims for state unemployment benefits increased 12,000 to a seasonally adjusted 500,000 in the week ended August 14, the highest since mid-November, the Labor Department said on Thursday.

More like the recovery summer’s bust. Larry Kudlow has more on the Economic Lessons of the Summer Swoon: disinflation, dropping bonds, falling stocks, and this,

And let me repeat my own mantra: The Fed can produce new money, but it cannot produce new jobs. Fiscal policy — and its threat of overtaxing, over-regulating, and overspending — is what’s ailing the economy. And that threat is reverberating through stock and bond markets. (The stock market, by the way, is still about 11 percent below its late-April peak.)

The U.S. trade deficit widened unexpectedly to a record 21-month high in June, as imports from its largest trading partners ballooned.

The shortfall in international trade of goods and services surged 19% to $49.90 billion, the Commerce Department said Wednesday. The deficit in May was revised down to $41.98 billion from an initial estimate of $42.27 billion.

Economists surveyed by Dow Jones Newswires had expected the deficit to expand to $42.7 billion in June.

The scariest number is the drop in exports. The nascent recovery in manufacturing was heavily predicated on exports sales. Say goodbye to that hope. Now it will be inventory building and government spending.

And may I remind you, government spending is simply the act of government bureaucracies taking money out of private hands and redistributing it – or worse, printing more paper.

I am shocked, shocked!

And,
Today in unexpectedly

UPDATE
Somehow I Was Too Optimistic On The Economy
Summer of Recovery: ‘The IMF has… pronounced the U.S. bankrupt’