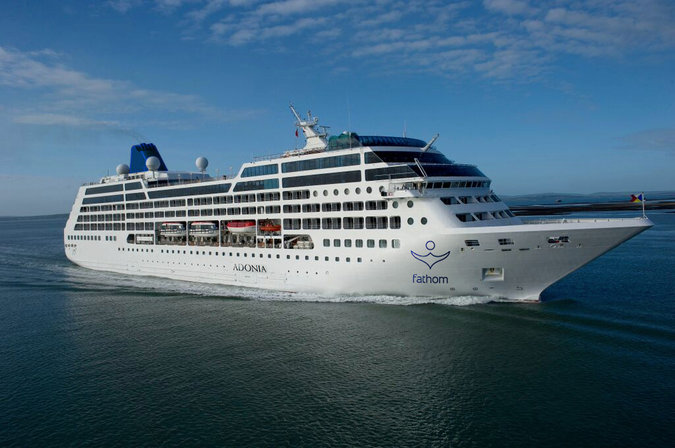 Well, well, Carnival Cruise Lines expected Cuba’s communist regime to lift its restriction on Cuban-born Americans who arrive by sea, but nooooo . . . and now a group of Cuban Americans have a discrimination lawsuit against Carnival in federal court.

the MV Adonia, that is scheduled to sail to Cuba was found to be deficient in meeting safety standards set by the U.S. Coast Guard and that it’s first voyage to the Dominican Republic under Fathom’s flag was canceled.

Additionally, last Tuesday protestors demonstrated in front of Carnival Corp.’s Doral headquarters. Among them was Ramon Saul Sanchez, president of the Democracy Movement, which organized the protest. Now, after living in the U.S.A. for forty-nine years, Ramon Saul Sanchez Has U.S. Residency Application Denied.

Sanchez, who obtained legal entry into the U.S. in what is known as a “parole,” applied for permanent residency in 2002 so he could legally travel aboard the many flotillas he has organized over the years and return easily to the United States.

That permanent residency request was denied and his parole has now also expired, according to the letter issued by U.S. Citizenship and Immigration Services.

“You are not authorized to remain in the United States and should make arrangements to depart as soon as possible,” stated the letter, dated April 7 and received by Sanchez Thursday. “Failure to depart may result in your being found ineligible for immigration benefits and inadmissible to the United States in the future.”

The letter also states that the decision cannot be appealed. However, a motion to reopen the case could be filed. Sanchez said he has lawyers working on the next step.

Maybe he ought to have tried calling himself a “Dreamer,” or claim to be Syrian.

ARGENTINA
Time Warp: Five dead in Argentina after taking drugs at electronic music festival that ‘got out of control’. Doctors said they were trying to determine what drugs the victims had taken

The former Argentine President, Cristina Fernandez de Kirchner, has refused to testify at a court hearing into fraud allegations.
. . .
Emerging from the courthouse, Ms Fernandez gave a stirring hour-long speech to the crowds. She suggested she and other leftist leaders in the region had been unfairly accused of corruption by a “media, political and judicial matrix”.

The crowd trashed the location.

BOLIVIA
Evo feels the Bern at the Vatican,

Two days ago, Brazil’s Rousseff Works to Sway Lawmakers on Eve of Impeachment Vote. President meets with officials at her residence while other lawmakers continue congressional session

WHY BRAZIL IS WORRIED ABOUT ISIS. The Olympics are scheduled to open on August 5th.

“Unfortunately the weather system over the metropolitan region brought rain that caused increased sediment in the Maipo River, which means a water cut for the population affecting about three million people,” Santiago Mayor Claudio Orrego told a news conference.

Santos published an op-ed in The Guardian, As Colombia’s leader, I know we must rethink the drugs war.The president of Colombia argues that his country’s narco-related violent history illustrates exactly why a global rethink on prohibition should be the key discussion at this week’s UN general assembly special session on drugs

Cubans in Ecuador want to fly directly from Quito to reach the U.S.

Authorities have just identified and moved to seize some assets tied to a new cartel in Mexico that had been quietly working under the radar for year supplying large quantities of heroin into Philadelphia. Soon after the announcement, a Mexican governor rushed to their defense claiming they were not a security threat.

Known as the Laredo Cartel, the group had been supplying the streets of Philadelphia with a steady supply of heroin from Mexico.

Ms Caride was stripped of her title after she was criticised for being dismissive and saying she did not love cameras in an interview with a local newspaper.

Say “NO” to the bailout: Puerto Rico rescue falters under attack by conservatives, investors.

VENEZUELA
Shifting the deck chairs on the Titanic, Venezuela travels forward in time half an hour to help ease energy crisis.Nicolás Maduro rolls back measure enacted by Hugo Chávez to provide more daylight during hours of peak energy consumption amid drought conditions