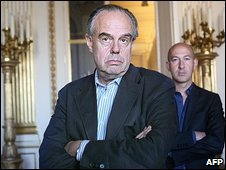 I wasn’t going to post more on the pedophile rapist, but changed my mind after watching this at Big Hollywood:

Listen to Whoopie: “Whatever Polanski was guilty of, it wasn’t rape-rape.”

Let’s review what Polanski actually did:
First, Polanski, who was 44 yrs old, gave a 13-yr old child a Quaalude and champagne. Then he got going.

What I’m going to post is not suitable for work, so it’s below the fold:
END_OF_DOCUMENT_TOKEN_TO_BE_REPLACED

For those of you not familiar with Polanski’s criminal act, LaShawn has the condensed version

In 1977, 44-year-old movie director Roman Polanski pled guilty to raping a drunk and drugged 13-year-old girl. After plea-bargaining the drug/rape/sodomy charges down to unlawful sexual conduct with a child under 14 and serving 42 days for the evaluation period, Polanski fled to England, then France, to avoid extradition. He’d been on the run ever since. Until September 26. Polanski was arrested in Switzerland.

Patrick Frey, an assistant district attorney in LA whose office is seeking Polanski’s extradition, notes that Polanski “pled guilty to unlawful sex with a minor, in return for the agreement to dismiss several other charges, including rape and sodomy.” He and a co-blogger remind us of the graphic details of the case, which belie the notion that Polanski is some sort of victim. Let’s just say that the girl in question was drugged and the encounter was otherwise decidedly less than romantic. See also the [NSFW] victim’s grand jury testimony, which makes clear the sex was forcible and that, even drugged with alcohol and Quaaludes, she explicitly denied consent. Which, of course, a 13-year-old can not give under the law.

The WaPo has no excuse for not revealing that Anne Applebaum is married to a man lobbying for Polanski’s release.

As for Polanski, I don’t care how good his movies are, or how tragic his life is/was, or what. He should serve time in jail. Whether the victim wanted no further legal action does not matter, since, as James points out, rape is a felony, not a tort. But let Kieran Healy pour some scorn on his defenders:

Puritanical Americans simply do not have the enlightened attitude toward wine at the dinner table, quaaludes, and child rape that the Europeans do.

Among the Europeans, French culture minister Frédéric Mitterrand, who, as Erik will remind you, “wrote an autobiographical “novel” about going on trips to Asia for sex with young boys.”