On Wednesday, December 17, 2014 President Barack Obama read a Statement on Cuba Policy Changes. One could parse the fallacies, starting with “the United States of America is changing its relationship with the people of Cuba,” when in fact the change is in the relationship with the Communist regime oppressing the people of Cuba. Cuban opposition leaders decry the move, clearly seeing it as a betrayal since the know that engagement won’t automatically promote freedom

Opposition leaders from throughout the island have agreed on four immediate demands to put before the government: the release of political prisoners; the end of repression against human rights and pro-democracy groups; the ratification of international covenants on human rights; and the recognition of Cuban civil society groups.

Nothing in the December 17 Statement refers to those demands.

Apparently 53 political prisoners are to be released; I’ll be most obliged if anyone could send me a link to the list of their names and the date(s) of their release, since I have not been able to find it.

The Liberal Fallacy of the Cuba Deal
Don’t get me wrong: I support the normalization of relations. But believing it can remake the regime in Havana is the worst kind of American exceptionalist fantasy.

The fantasy that U.S. policies and actions can reshape another country has been with us for far too long. The ability of the United States to change any country’s internal economy or politics is extraordinarily limited, as our most recent experiences in Iraq and Afghanistan show, yet again.

Change must come from within Cuba: Only Cubans can save Cuba.

As things stand right now, the odds have vastly improved for Cuba to “transition” into a profitable Communist regime, like China’s. Or perhaps, even more likely, the Viet Nam outcome,

The Vietnam outcome is what the Castros are counting on: a flood of U.S. tourists and business investment that will allow the regime to maintain its totalitarian system indefinitely.

Obama is trying to cement his legacy. Human rights (and true democracy) be damned.

As an aside, the Castro regime has availed itself of santería imagery to instill fear at home (even having members of his entourage pluck dead chickens at the Waldorf Astoria in 1960). Obama’s announcement came on St. Lazarus day, a saint in Cuban santería, as Val Prieto points out. When it comes to symbolism, Obama handed the Castros an ace in the hole. 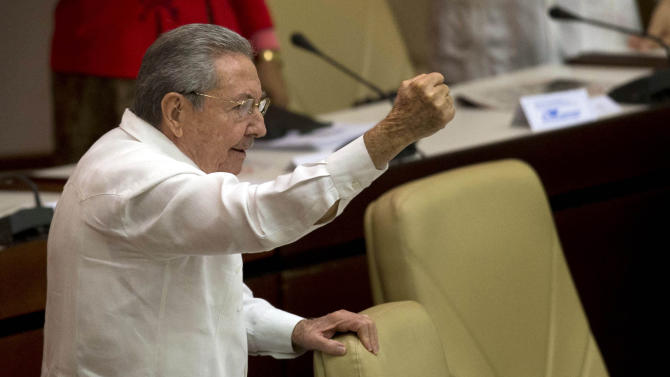 1960 article from The Economist: On The Rocks

Castros Pull It Off, Again? Some Preliminary Thoughts

Will Obama roll out the White House red carpet for Raul Castro?

‘Disturbing to say the least’: Something’s VERY wrong with this photo of Alan Gross

What Part of Keeping Cuba Isolated Has Not ‘Worked’?

Castro’s Hipster Apologists Want to Keep Cuba ‘Authentically’ Poor
The thawing of diplomatic relations between the US and Cuba has elicited a lot of patronizing, asinine fretting about the imminent “Americanization” of Cuba.

The WaPo sees the light on Obama and Cuba

Democracy in Cuba is a long-term project. One of the arguments from those who want to lift the embargo is that capitalism will bring democracy to Cuba. What this argument fails to take into account is that Cuban society from an ethics standpoint has de-evolved. Since Castro has taken over, Cuban society has regressed. Through its loss of freedom and the economic rations, the Cuban people have adopted a “survival of the fittest” mentality. In terms of daily life, this means that the Cuban people have to steal either materials, or food, or money in order for their family to survive. Their thought is that the consequences be damned, I have to do this for my family to survive. For foreign companies that want to do build factories and or businesses in Cuba, be prepared to deal with employees who will steal.

CHILE
Emanuel heading to Chile for holidays, despite possible criticism

VENEZUELA
Venezuela is done for; it is not me saying it, it is Raul Castro

Another thing is that the way Raul Castro has dumped Venezuela for the US tourism dollar. Now that Venezuela is bankrupt, the only quick fix available for Cuba is to open its tourism to US visitors, and to Miami Cubans eager to come back and buy back, say, their ancestral home. Raul Castro, for all practical purposes, told us today that Venezuela is done, that he cannot leech much more from it, and that he dumps us without ceremony. We are broke and not even the most idiot of chavistadom can pretend to ignore that for much longer.

But what worries me the most about the whole Raul-Obama deal is that a wind of impunity is blowing through the Caribbean. Thousands of Cuban criminals that supported the Castro horrendous dictatorship are now going to go Scott free. Sure, a couple of them will be somehow sent to trial, scapegoats for decades of tyranny and errors. But it looks like the Castros are now going to die peacefully in their bed while the cult to Che will grow even stronger as throngs of lobotomized US tourists will be driven to the high places of Che crimes.

Current occupant of the White House imposes sanctions on Venezuela, no one pays attention

The week’s posts and podcast:
Cuba: Raul gets richer

Cuba: US law and dissidents’ objectives

Ecuador: Selling it to China

Cuba: What is the regime going to do?

Cuba: #AlanGross released – is Obama ending the embargo in exchange? UPDATED THROUGH THE DAY

Brace yourselves: Obama to end the embargo after Gross’s release

Podcast
A look at Venezuela, Cuba and other US-Latin America stories of the week

Not surprisingly, the Chicago way in action,

The Illinois Supreme Court ruled today that former White House chief of staff Rahm Emanuel meets the residency requirements to run for Chicago mayor, overturning a lower court ruling and re-installing him as the race’s frontrunner.

As if a State Supreme Court would go against a sitting President from the same state.

Prior posts:
What O wants, O gets? Ruling Restores Emanuel’s Name to Ballot, for Now
Obama wants Rahm Emanuel back on the Chicago mayor ballot

“I think that [Obama] believes that [Emanuel] is eligible, and that he believes that Rahm will pursue his appeal in the courts,” said Valerie Jarrett, a senior adviser to Obama and fellow Chicagoan, on ABC’s “Good Morning America.”

Apparently the ballots have not yet been printed:

The Chicago Board of Elections planned to start printing ballots without Emanuel’s name unless Emanuel’s lawyers can get a “stay” of the appellate court ruling. Emanuel’s lawyers filed their request for a stay just before 5 p.m. Monday

Will it be a case of “what Obama wants, Obama gets”?

I was asking just a little while ago, Will it be a case of “what Obama wants, Obama gets”?

Didn’t have to wait long for an answer:
Ruling Restores Emanuel’s Name to Ballot, for Now

The Illinois Supreme Court on Tuesday ordered Rahm Emanuel’s name back on the ballot, a day after an appellate court ruled him ineligible to run for mayor of Chicago, and told election officials not to print any ballots that exclude Mr. Emanuel’s name.

Emanuel has continued campaigning as if nothing’s going on.

The Chicago News Cooperative is reporting that an Illinois Appellate Court has overturned a decision regarding Rahm Emanuel’s Chicago residency. The court reportedly decided Emanuel is not eligible to run for mayor of Chicago because he has not been a resident of the city for one year.

“We conclude that the candidate neither meets the the municipal code’s requirement that he have ‘resided’ in Chicago for the year preceding the election in which he seeks to participate nor falls within any exception to the requirement,” the ruling stated. (Read the court decision here.)

Surely Sarah Palin is to blame?

How Oprah Winfrey Can Get Her Brand Back

Michael Moynihan says this article by Richard Cohen is The Worst Column of the Year. I think Michael’s an optimist; the year is not over yet, by a long shot, and elections always are a fountain of poor writing, faulty logic and senseless rhetoric.

Since 1999, when Chavez took office, the government has taken over some 2.5 million hectares (6.2 million acres) of land

More on Geert Wilders:Tear Down This Wall!

You can’t make this up: Rahm Emanuel: Experts say not a legal resident of Chicago, cannot run for mayor, so of course he has a video titled “Glad to be home”…which was made in Washington, DC. There is no “there” here.

On Pakistan and the US: Pundita explains reality to Rachel Maddow and the Pakistanis to Gen. Petraeus, Part 1

Washington defense policymakers are the only people on Earth who whap themselves on the back of the head then yelp, ‘Who hit me?’ So before strategy must come the ability to chew and walk.

How Much Trouble Are We In? This much trouble:

First time I hear the phrase “fresh legs” in this context:
Spokesman: Obama may get chance to add more ‘fresh legs’ at White House

“At the end of a president’s first two years in office, there are often changes that occur,” Burton explained on the liberal Bill Press radio show. “There’s going to be a lot of different things the president will have the opportunity to inject some fresh legs and ideas.”

Did the phrase “fresh legs” come up because of former ballet dancer Rahm Emanuel’s upcoming departure?

Is it to avert voters’ voting with their feet?

Or is Obama starting a new stimulus by bringing in great legs to help him tap dance on the issues?

Here’s a pair of “fresh legs and ideas” sure to get the Dems in a huff:

Not, “we talk to these folks because they potentially have the best answers so we can find the solution to this problem.”

Instead, “so I know whose ass to kick.”

Does that fill you with confidence? Does it demonstrate effective leadership?

The nation should rejoice in being led by such a diligent a**-kicker in chief in this time of crisis. The latest Punic mission has been to stop offshore drilling in the Gulf of Mexico and the North Slope of Alaska for at least another six months, halt already-planned exploratory deep-sea-drilling operations, and cancel lease sales in the Gulf. Subjected to such measures — as proactive as would be the crippling of the airline industry in response to a plane crash — the guilty a**es are indeed sore already. Which is warm comfort for the administration’s repeated failures to stop the spill or contain its spread along the coast.