Yes, I love Thanksgiving Day. No, I don’t go shopping in stores on the weekend.

Now we have that out of the way, let’s look at the week’s stories:

Although they kept it quiet, Argentina’s dictators had a gentlemen’s agreement with Castro. Under the pact, Videla supported Cuba’s bid in 1977 to join the Executive Council of the World Health Organization, a diplomatic feather in Castro’s beret. The quid pro quo was that Havana stump among nonaligned nations to name Argentina to the United Nations prestigious Economic and Social Council. Apparently Cuba’s vote was the 18th and decisive ballot, landing Argentina the coveted UN seat.

Drought-hit Sao Paulo may ‘get water from mud’: TRFN

Castro’s agents had targeted Macy’s, Gimbels, Bloomingdales, and Manhattan’s Grand Central Station with a dozen incendiary devices and 500 kilos of TNT. The holocaust was set for detonation the following week, on the day after Thanksgiving. 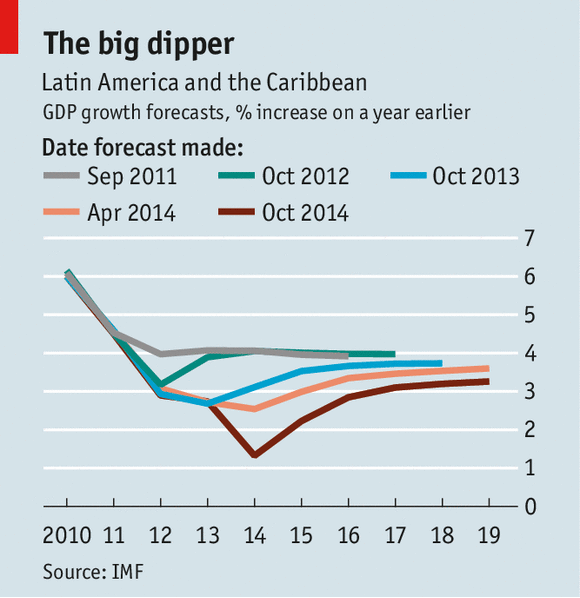 Worst off are those countries with populist governments that squandered the windfall from the boom. Forecasters see no let-up in the stagflation afflicting Venezuela and Argentina. Thanks to lack of investment and clumsy macroeconomic management, Brazil’s economy will barely grow this year and faces a fiscal squeeze in 2015. Yet the deceleration goes far wider. The high-flying and well-run economies of Chile, Peru and Colombia are all suffering. The growth rate this year in Chile (2%) and Peru (around 3%) is half that of 2013. Contrast that with sub-Saharan Africa, which is also a big commodity producer and where the IMF expects growth of 5.1% this year and 5.8% next.

MEXICO
As Mexican Border Town Tries to Move On, Some Are Stuck in Limbo

Venezuela Says 35 Prison Inmates Dead From Overdose
Pressure is building on Venezuela’s government to fully investigate a rising number of deaths at an overcrowded prison, with human-rights activists questioning authorities’ claim of a mass drug overdose by dozens of inmates who stormed an infirmary.

The week’s posts:
Venezuela: AP does Orwell so well

At Da Tech Guy Blog:
The only people with the right to object to immigration are Native Americans

On thankfulness and apple pie