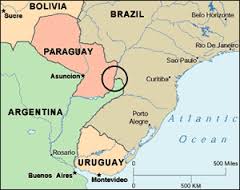 A gang of at least thirty men blew up the front of the Prosegur private security firm in Ciudad del Este, in Paraguay’s tri-border area, and made off with US$40million.

And that was just the start:
Huge robbery sparks gun battles in Paraguay and Brazil

After the robbery, the gang created a diversion by burning cars and attacking the local police station.

They escaped after a two-hour shootout that left one police officer dead at the scene after the company’s vaults were blown up.

Police believe they fled in several of the security company’s armoured trucks and then may have transferred their booty to waiting boats at the Parana river.

They were believed to have travelled 50km (30 miles) downriver to a region called Itaipulandia in Brazil, were they were intercepted by Brazilian police.

The BBC said there were fifty men, AlJazeera said up to 80 people may have been involved in the attack, and the Telegraph claims there were thirty,

Vladimir Jara, spokesman for Paraguay’s interior ministry, said they too believe the robbery was carried out by a Brazilian criminal organisation.
. . .
The city’s [Ciudad del Este] location means that cocaine from Bolivia flows down the river, before being distributed into the large Brazilian and Argentine metropolises.

At least 12 people managed to escape police at a third confrontation in Itaipulandia, also on the Brazilian side of the border.

Paraguayan police chief Luis Rojas said it was possible the attackers had help inside the police.

The PCC reportedly has consolidated control over the area’s drug traffic monopoly.

Authorities believe the robbers were members of Primer Comando de la Capital, one of the largest criminal organizations in Brazil.

O Globo (link in Portuguese) confirms that eight suspects are under arrest. The O Globo article states there are fifty suspects, and that the eleven hostages had been released. Brazil’s Federal Police seized six rifles, ammunition, two boats and seven vehicles used in the assault.

This is the largest robbery in Paraguay’s history. The riot was caused by a fight between members of São Paulo-based First Capital Command gang, or PCC, and Sindicato do Crime, its local rival inside the prison.
. . .
The PCC, Brazil’s largest criminal gang, is seeking to expand its dominance to the country’s north and northeast to gain the control over lucrative cocaine smuggling routes.

The violence allegedly broke out as a result of a feud between two major prison gangs, the Family of the North (Família do Norte – FDN) and the First Capital Command (Primeiro Comando da Capital – PCC), which have been competing for control of the Amazon region’s lucrative drug trade.

The PCC is trying to stay on top.

Judicial Watch has an Imminent Terrorist Attack Warning By Feds on US Border, which, as Andrew McCarthy explains,

this is not a surprise — particularly less than two weeks before September 11. But it is nonetheless jarring to read.

More bat-shit craziness: Argentina contemplates moving capital from Buenos Aires
Buenos Aires is seen as being geographically remote from much of the rest of the country
Buenos Aires could be replaced as capital of Argentina by a city 600 miles to the north [Santiago del Estero], under a plan floated by Cristina Kirchner

BRAZIL
Other than post-Chavez Venezuela, Brazil is the worst out of 11 countries ranked by a joint study conducted by Brazilian and German economic think tanks.

DRUGS
Drug Use and Drug Spending: How the Washington Post and the President Get It Wrong

ECUADOR
The Future of Dollarization in Ecuador

GUATEMALA
Jews ‘forced’ from Guatemala villageMen from a Jewish community load furniture onto a lorry in San Juan La Laguna
Some 230 members of an Orthodox Jewish group begin leaving a village in western Guatemala after a bitter row with the local indigenous community.

MEXICO
Mexico Looks to Raise Wages
Mexico City’s leftist Mayor Miguel Ángel Mancera raised pressure on the federal government with a proposal to lift the federal minimum wage—which lags only behind Haiti in the hemisphere—to $6 per day for 2015.

Mexico’s Pemex Forecasts 6.7% Drop in Crude Production in 2014
The head of Pemex’s exploration and production division said production will fall from 2.52 million barrels per day in 2013 to 2.35 million bpd at the close of 2014

More Than 134,000 Petition Obama Admin. to Demand Release of Sgt. Tahmooressi — Here’s the Response They Received Instead

NICARAGUA
Nicaragua Landslide Traps Gold Miners
Rescuers in Nicaragua raced to reach at least 24 freelance gold miners trapped by a landslide, including 20 who have been located and have managed to communicate with emergency crews.

There Is Too Much Money To Be Made In The Bolivarian Revolution I: The Gasoline Racket.

The Venezuela Case Study In How Not To Help The Poor

A Proposal of a New Flag from a Opposition Movement to Chavismo and the Bolivarian Republic of Venezuela {Venezuatu}…! THE NEW COUNTRY OF: Venecian Guiana !

The week’s posts and podcast:
A day in the life of the Panama Canal

At Da Tech Guy Blog:
The audacity of taupe

Warren Buffett and his American dollars for Canadian doughnuts 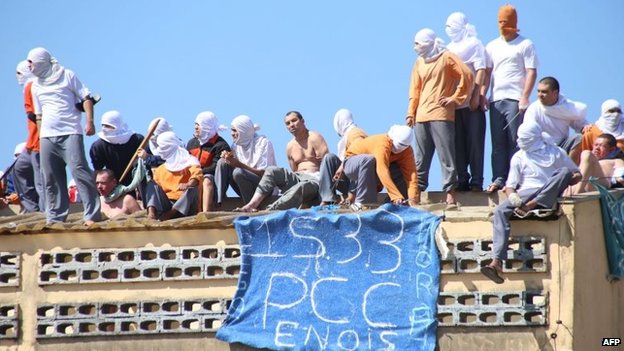 Mounting Chaos in Rio Sparks Worries Over World Cup
As Rio gears up for next year’s FIFA World Cup and the 2016 Olympic Games, the summer uprising shows no signs of slowing the city, as reflected by vandalized storefronts and burned vehicles. Money quote:

And let’s keep in mind that both projects were sold as not needing government financing.

Then there’s the anarchists by any other name,

Rio’s black bloc organizers couldn’t be reached to comment. On their Facebook page, which has nearly 63,000 followers, the group quotes Italian anarchist Pietro Gori and say they see property destruction as part of their fight against capitalism.

And let’s not forget the PCC, too.

So, to answer the question above, no, not ready yet.

Via Silvio Canto,
Brazil’s biggest drug cartel promises a ‘World Cup of terror’ as violent demonstrations take over the streets

In messages intercepted by police this week, leaders of the gang in Sao Paulo made the vague but ominous threat should the authorities move jailed members of the cartel to a tougher prison.
In Brazil, powerful gangs often linked to the drug trade are very powerful and frequently control whole prisons and favelas, or shanty towns.
…
During 2012, a war broke out between the gang and Sao Paulo’s Military Police.
They felt the government had violated an informal agreement, long denied by officials, to slow the prison transfers of gang leaders and limit crackdowns on its operations on Sao Paulo’s outskirts in exchange for an end to gang violence.

The reason the First Capital of the Command, Primeiro Comando da Capital, known as PCC (pronounced peh-ceh-ceh) don’t want their members dispersed to other jails outside the area is that they would have difficulty giving orders by cellphone to their soldiers on the outside.

The Mail article points out that the PCC was initially formed to pressure for improved prison conditions inside Sao Paulo’s Taubate Penitentiary:

While the gang’s start may have been rooted in fighting for basic human rights of the imprisoned, its members quickly began using their power inside prisons to direct drug-dealing and extortion operations on the outside.

‘The PCC is better organized, more powerful, and they have a monopoly of crimes and power which is something nobody achieved in Rio,’ said Ignacio Cano, a researcher at the Violence Analysis Center at Rio de Janeiro State University. ‘They are by far the strongest criminal group in Brazil.’

Reportedly they are well organized into a corporate business model that includes outsourcing.

Folha de Sao Paulo has been covering the PCC, and they report that Brazil’s defense minister stated in a press conference that the Federal Police, the National Guard and the Ministry of Defense are up to the challenge of providing security at the World Cup.