There you have it: Seals helped Europeans wipe out Native Americans
Europeans have long been blamed for wiping out 95 per cent of Native Americans by bringing foreign diseases to the New World. But a new study suggests seals could be partly to blame

The research shows that tuberculosis is likely to have spread from humans in Africa to seals and sea lions, who then carried the disease to South America and transmitted it to Native populations long before Europeans landed on the continent.

The government’s unorthodox economic management came under further scrutiny on Thursday when beef exports were suspended to combat inflation, despite dollar shortages.

BRAZIL
Brazilian Police Officers Acquitted of Murder Charges
A jury has acquitted four police officers of murder charges in the 2012 shooting death of a suspected car thief, a case that attracted attention to the lethality of Brazilian police.

[The president of the Colombian Petroleum Association, Francisco Jose Lloreda] called on the government to provide security guarantees irrespective of whether a peace deal is reached with the Revolutionary Armed Forces of Colombia (FARC) guerrilla group in talks in Havana dating back to 2012.
. . .
The FARC and ELN have carried out numerous attacks in recent months on oil infrastructure, particularly pipelines and tanker trucks in the northern provinces of Arauca and Norte de Santander, which border Venezuela, and in Putumayo, which borders Ecuador

GUATEMALA
General Dies in Crash
A top Guatemalan general and four other officers were killed on Wednesday when the helicopter they were in crashed near the country’s northern border with Mexico, Guatemala’s government said.

“Meet the Press” covered Rand Paul’s pro bono eye surgery in Guatemala and larded it with impugnment of his motives. Paul has been doing pro bono work for decades.

Why the Pacific Alliance Puts Mercosur to Shame
Protectionist Panderers No Match for Liberal, Free-Market Integration

Are we supposed to believe that Mexican authorities are keeping track of who’s crossing? Mexico Dismisses Perry Claim Islamic State Could Have Crossed U.S. Border
The Mexican embassy in Washington Friday dismissed Texas Gov. Rick Perry’s claim that “there’s a very real possibility” extremists from the Islamic State have already snuck into the U.S. over the southern border.

"They were just never heard from again." A Mexican cartel incinerated hundreds of victims: http://t.co/h2KiBto0hX pic.twitter.com/MQ5p1jhMMz

URUGUAY
The Rights Abuses Uruguay Doesn’t Want You to Know About
A small South American country has been making big strides in human rights. But it’s still got some work to do.

Good luck with that!

TSA: Illegals without ID can fly with ‘Notice to Appear’

At Da Tech Guy Blog
Biometrics and the police state

Last November I predicted that, if Michelle Bachelet made good on her campaign promises, it would be disastrous not only for Chile, but also for the region.

She’s on her way:
Assault on the Chilean Miracle
President Bachelet wants to raise the corporate tax rate to 35% from 20%. (emphasis added)

Three decades of fast growth—led by liberal economic policies—have made Chile the most prosperous country in Latin America. Its annual per capita income of more than $19,000 is up from $5,000 in 1990. The percentage of Chileans living in poverty stands at 14.4%, down from 45% in 1985.

The country also stands out politically in the region for its adherence to a rule of law that protects minority rights and eschews banana-republic populism.

Now Ms. Bachelet and her minions in Congress are signaling a game change that suggests a return to the political polarization of the early 1970s. It is hard to avoid the conclusion that they see their legislative majorities as their chance to finally ram the utopian dream of the late President Salvador Allende down the collective Chilean throat.

Sen. Jaime Quintana, spokesman for the New Majority coalition in the upper chamber, said as much in March, when the opposition complained that the ruling coalition was using a “steamroller” in Congress. Not “a steamroller,” Mr. Quintana said. “We are going to use a high-powered steam shovel because it is necessary to destroy the antiquated foundations of the neo-liberal model of the dictatorship.”

In addition to raising the corporate tax rate to 35% from 20%, Bachelet wants to eliminate the FUT,

a key provision in the tax code that allows companies to delay paying taxes on earnings if those earnings are reinvested rather than paid out. Known by its Spanish initials as the “FUT,” this provision has provided much of the capital that fueled Chile’s rapid growth in the last three decades.

Wait until she amends the Constitution and starts overspending the mining profits on social programs and running a deficit.

Chile goes down, and the Pacific Alliance is o-v-e-r. 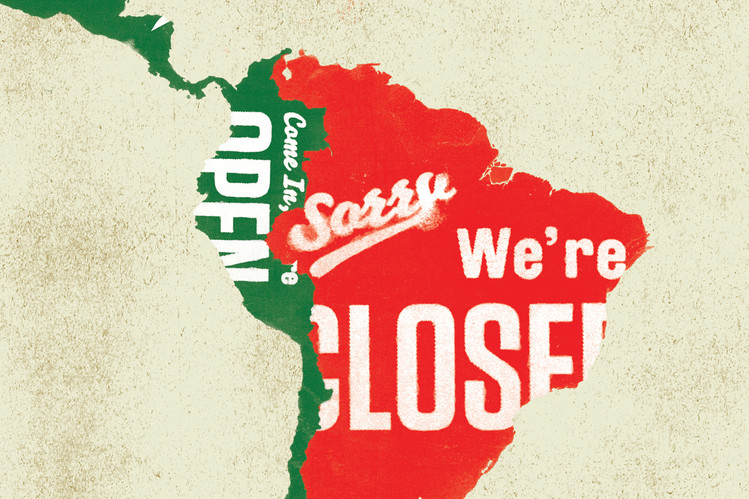 “After a decade of chavismo, these four countries are what is left of liberal democracy in Latin America” – and that’s good news:

The Next Big Free-Trade Breakthrough As a single region, the Pacific Alliance will be the eighth largest economy in the world.

Each of the members already has a bilateral free-trade agreement with each of the others and each has an FTA with the United States. Peru began opening its markets during the Fujimori government (1990-2000). With almost 20 years of Nafta under its belt and a decade of sparring with Chinese producers, Mexican business has become accustomed to foreign competition and is hungry for new markets. Chile has been opening its markets unilaterally for decades, and Chilean producers are world-class. Colombia, arguably the least open of the pack, is led by pro-market President Juan Manuel Santos.

As a single free-trade region, the Pacific Alliance will be formidable. Its population—almost 210 million—is 36% of Latin America and larger than Brazil. In 2012 the four economies combined accounted for 36% of the region’s gross domestic product, roughly half of the region’s total exports and imports. As a single region, the alliance would be the eighth largest economy in the world and the seventh largest exporter, according to Mexico’s economy ministry.

The alliance will also liberalize competition in services and provide a framework for certainty and regulatory stability for foreign investors.

The Economist has a must-read article on Latin American geoeconomics
A continental divide
The region is falling in behind two alternative blocks: the market-led Pacific Alliance and the more statist Mercosur 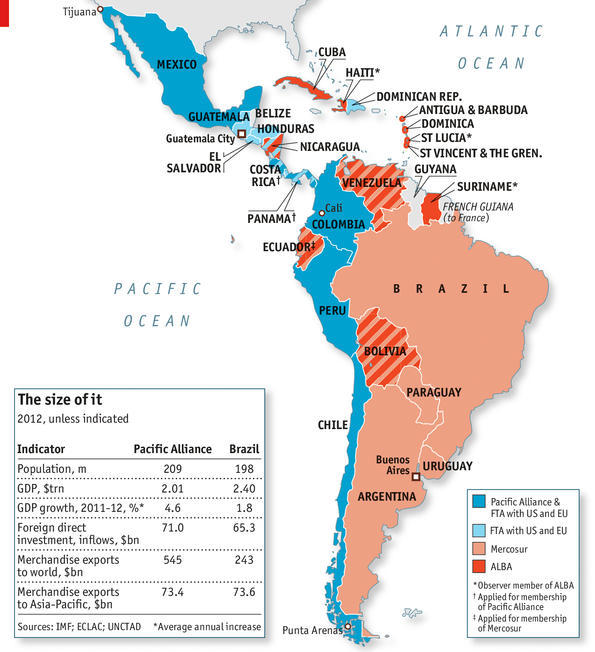