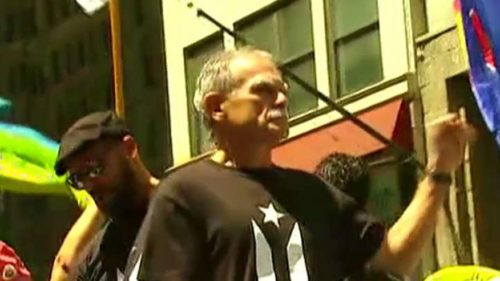 Controversial onetime convicted terror leader Oscar Lopez Rivera may have declined the Puerto Rican Day Parade’s “National Freedom Award,” but he was still at the head of the event Sunday — with the City Council speaker right by his side.
. . .

Mark-Viverito cut the ribbon at the beginning of the parade without him or Mayor de Blasio, but she caught up to Lopez Rivera as his float reached Central Park.

De Blasio, who previously said he would not march if Lopez Rivera was honored, nonetheless marched but kept a roughly 10-block buffer between himself and the divisive Lopez Rivera.

Over in Puerto Rico,

More than half a million people voted for statehood during Sunday’s referendum, followed by nearly 7,800 votes for free association/independence and more than 6,800 votes for the current territorial status. Voter turnout was just 23 percent.

UPDATE: As Jazz put it, Puerto Rican Day Parade Turns Out Pretty Much As Embarrassing As You’d Imagined, with DeBlasio hiding ten blocks away.

Zach Dorfman writes about the communist mentors:
How Fidel Castro Supported Terrorism in America. ‘FALN was started in the mid-1960’s with a nucleus . . . that received advanced training in Cuba.’ (emphasis added)

According to court documents, Filiberto Ojeda Ríos, who is believed to have helped co-found the FALN, told an undercover NYPD officer in 1983 that he had received explosives training in Cuba. And the FBI estimated that by 1973, roughly 135 Puerto Rican militants had received “extensive instruction in guerilla war tactics, preparation of explosive artifacts, and sophisticated methods of sabotage” from Fidel Castro’s intelligence services.

The full extent of the FALN’s Cuba connections is unknown. But they may be more enduring than has been publicly reported. According to an NYPD document I discovered at the Hoover Institution archives at Stanford—undated, but apparently circa 1977—by that time officials had come to believe that “the FALN was started in the mid-1960’s with a nucleus of Puerto Rican terrorists that received advanced training in Cuba. . . . After their advanced training in Cuba they returned to Puerto Rico and a wave of bombings and incendiary incidents struck the [latter] island. Within the last few years they have shifted their activities to the mainland. . . . It is believed that they have maintained close links and may in fact work closely with Cuban intelligence operatives.”

That training would help explain the FALN’s professionalism, as well as its ability to bedevil law enforcement. An FALN instructional manual, which I also found at Hoover, includes sophisticated directives for compartmentalized clandestine communications between different “cadres,” or cells, as well as espionage and countersurveillance techniques. “One must observe religiously the rules and regulations of security in order to protect the organization, its cadres, its secrets, its documents, its arms, [safe] houses, and other instruments of work,” the document says. According to the manual, this hyperattention to security even extended to meetings of the MLN, the FALN’s above-ground political organization.

Viewed from this broader perspective, the FALN was not merely a “highly motivated and intelligent adversary,” as the NYPD document I found puts it. It was an instrument in the decadeslong shadow war between the U.S. and Cuba.

“The Cuban Party, government and people send our fraternal congratulations,” Castro told Lopez Rivera. “We share the joy of your liberation.”

López Rivera would reunite with fellow FALN bomb maker William Morales,  who is thought to have lived in Cuba since June of 1988, according to the FBI.

after it was announced that former FALN kingpin Oscar Lòpez Rivera will be honored as a “National Freedom Hero” at the event.
. . .
The Sergeants Benevolent Association joined the Hispanic groups in calling for a parade-sponsor boycott.

Gov. Cuomo’s waffling on whether he’ll attend the parade.

On Thursday, López Rivera returned to his home neighborhood of [Chicago’s] Humboldt Park.

Oscar López Rivera, FALN terrorist convicted of waging war against the United States, will be honored as “National Freedom Hero” at this year’s National Puerto Rican Day Parade on June 11.

The guy is an unrepentant terrorist who used his own apartment as a bomb-making factory. López Rivera was involved directly or otherwise in at least 146 bombings.

Joseph Connor, son of one of the nine people López Rivera killed, writes in the NY Post (emphasis added),

The words “disgrace” and “outrage” do not come close to describing the insanity, insult and pain that honoring this terrorist thug brings to our family, the families of all FALN victims and all Americans. The idea is truly sickening.

In the early ’80s, 11 FALN members were arrested, tried and convicted of (among other serious felonies) weapons possession and seditious conspiracy. Lopez was convicted in 1981 and sentenced for crimes including seditious conspiracy, interference with interstate commerce by threats or violence, carrying firearms during the commission of those two crimes and interstate transportation of stolen vehicles.

There was testimony by a cooperating FALN insider that Lopez was personally involved in bombing and incendiary attacks, trained members in bomb-making techniques and had been a prime recruiter for the FALN.

In 1987, he was sentenced to an additional 15 years for participating in a conspiracy to escape.

Yet [NY City Council Speaker Melissa] Viverito and her ilk call Lopez a “National Freedom Hero.” They are deranged.

Some claim he is a “freedom fighter” for Puerto Rican independence against US colonialism of the island. But aside from being a terrorist, what has he done to support “freedom” in Puerto Rico?

The FALN’s first attack, in December 1974, targeted the NYPD, severely maiming Angel Poggi, a young NYPD officer of Puerto Rican descent on his first day on the job. Is this the act of a hero of the Puerto Rican people? Lopez has never represented Puerto Ricans.

López Rivera will never represent me.