Over the last year, the CJNG has become known for taking the fight to law enforcement—launching guerrilla-like assaults against authorities that have claimed dozens of officers’ lives, including shooting down an army helicopter and killing everyone aboard.

Situated on the border between the states of Jalisco and Michoacán and at the crossroads of two major highways, Tepalcatapec offers a vital control point for the CJNG. From here they can launch attacks against competing crime networks in Michoacán, as well as packing and processing drugs to send them north.

ReThe U.S. Treasury Department has designated the super cartel’s leader, Nemesio Oseguera Cervantes (alias “El Mencho,” or “Blondie”), a “Narcotics Kingpin”—and the State Department is offering up to $5 million for information leading to his capture and conviction.

The de facto successor to the Sinaloa Cartel’s Chapo Guzmán, El Mencho, who is in his mid to late forties, has been trafficking narcotics across the U.S.-Mexico border for more than two decades.

Don’t believe for a moment that they would put aside their murderous ways if all their drugs were legal.

As far as I’m concerned, whatever your addiction issues are, if you are using drugs, you are an accessory to their crimes. 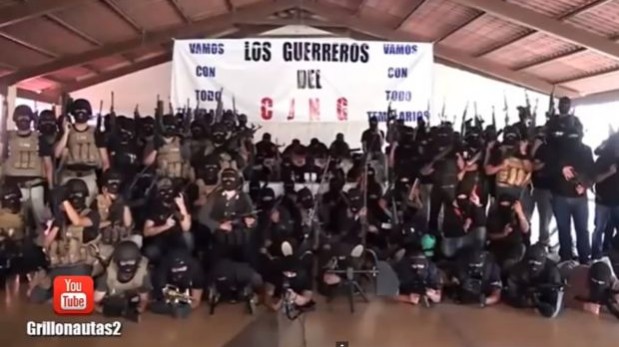 The WSJ reports on the latest cartel, Jalisco Nueva Generación:
Rise of Drug Cartel Brings Wave of Mexican ViolenceArmy hunts for three missing soldiers in Jalisco since helicopter was shot down on Friday

“A new and military powerful cartel is appearing, and opening up a new front in the war against drugs in Guadalajara and Jalisco,” said Raul Benitez, a security analyst at the National Autonomous University of Mexico.

The flare-up of violence in Guadalajara, a city of 1.5 million people in a metropolitan area of 4.5 million, and the resort town of Puerto Vallarta is the latest setback for the government of President Enrique Peña Nieto. The government has been determined to show that Mexico is a modern, emerging economy, but its inability to control areas where criminal gangs continue to exert control have frustrated these efforts.

“Guadalajara is not a little town in the middle of nowhere, and this shows the cartel has the logistics and power to paralyze a city,” said Jorge Chabat, a security analyst at the CIDE think tank in Mexico City.
. . .
The areas the Jalisco cartel controls sit astride important transport and production centers for cocaine, heroin, methamphetamine and marijuana.

The Jalisco Nueva Generación, who are allies of the Sinaloa cartel, started in 2010 for the purpose of neutralizing the Zetas, according to this report from El Comercio. Mexican authorities have discovered a sophisticated smuggling tunnel equipped with electricity and ventilation not far from the Nogales port of entry into Arizona, U.S. and Mexican officials said Friday.

The Mexican army said the tunnel was found Thursday after authorities received an anonymous call in the border city of Nogales, Sonora, south of Arizona. U.S. law enforcement officials confirmed that the Mexican military had discovered the football field-long tunnel with elaborate electricity and ventilation systems.

U.S. Border Patrol spokesman Victor Brabble said the tunnel did not cross into the U.S.

This is not the first, nor the only; in fact,

More than 70 such tunnels have been found since October 2008, most of them concentrated along the border in California and Arizona. In Nogales, Arizona, smugglers tap into vast underground drainage canals.

In other drug war news, the war is not only against law enforcement, it’s also cartel vs. cartel, for territory:Nine slain in Mexican town as cartels clash in Sinaloa

A group of armed men stormed a town in the mountains of the western state of Sinaloa on Christmas Eve and shot nine men to death with assault weapons, then dumped their bodies on a sports field as part of a war between Mexico’s two most powerful cartels, officials said Wednesday.
Sinaloa state prosecutor Marco Antonio Higuera Gomez said the town of El Platanar de Los Ontiveros had become part of a dispute between the Sinaloa cartel controlled by Joaquin “El Chapo” Guzman, Mexico’s most-wanted man, and remnants of the Beltran-Leyva cartel who have allied themselves with the Zetas, a paramilitary organized-crime group founded by ex-members of the Mexican special forces.
…
Another cartel fight is raging to the south, along the border between the state of Jalisco and Michoacan. At least seven people have been killed in the area since Sunday. Officials in both states said Wednesday they could not confirm local media reports of more than a dozen new deaths in clashes in the area. Michoacan authorities did report the slaying of a mother and her three children in the capital, Morelia, which has been mostly spared the worst of the state’s drug violence.
Prosecutors said 41-year-old Maria Elena Lopez Bautista and her 19-year-old daughter and 18- and 13-year-old sons appeared to have been tied hand and foot with wire and burned to death inside their home on Monday.
Officials did not speculate on the motive for the crime, but the border with Jalisco has been hit by clashes between Michoacan’s dominant Knights Templar cartel, and the New Generation cartel that operates in much of Jalisco.

With the PRI back in power in Mexico, and marijuana legalization in the USA, 2013 will be an interesting year.