Vásquez was born and raised in Norway of Chilean parents. After converting to Islam he took the name Muhammad Jundullah or Abu Saffiya, and joined radical islamist Norwegian group. “Profetens Ummah”.

The high production values make Al-Hayat videos appear far more sophisticated than the average jihadist propaganda and serve to attract Western viewers, who may be inclined to join ISIS. Unlike other jihadist groups, they are seeking to build their numbers by persuading Western Muslims–not jihadists already active in the area. This explains the development of a theme song and editing of a mass execution to make it look like a scene out of a World War II movie. ISIS’s adeptness with media makes it one of the most dangerous of such threats against the Western world, and as it expands, expect the group to parade its international recruits more prominently in subsequent videos.

The second video is much violent, as you can see here.

ISIS declared a caliphate last Sunday. Among other propaganda released is this other video, not as polished, in Spanish (which I translated), staking a claim on Spain,

UPDATE:
Abu/Bastián is the guy who taunted Obama to buy diapers. 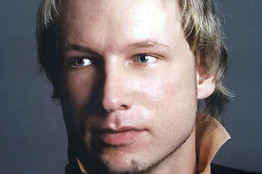 Shortly after the explosions, which appeared to be a bomb attack, a man dressed as a police officer opened fire on a summer camp for young members of the ruling Labor Party on the island of Utoya in the Oslo fjord, about 25 miles from the city, and wounded at least five, a Norwegian security official said.
…
A terror group, Ansar al-Jihad al-Alami, or the Helpers of the Global Jihad, issued a statement claiming responsibility for the attack, according to Will McCants, a terrorism analyst at C.N.A., a research institute that studies terrorism. The message said the attack was a response to Norwegian forces’ presence in Afghanistan and to unspecified insults to the Prophet Muhammad. “We have warned since the Stockholm raid of more operations,” the group said, according to Mr. McCants’ translation, apparently referring to a bombing in Sweden in December 2010. “What you see is only the beginning, and there is more to come.” The claim could not be confirmed.

Gates of Vienna and The Guardian have constant updates.

At least one of two explosions that rocked a Norwegian government building in Oslo today was result of a massive vehicle bomb, according to U.S. government sources on the scene.

The tangled wreckage of a vehicle was seen near the Norwegian government building that was targeted in the blast, officials said. It was not clear if the car was a bomb vehicle or near the site of a blast. At least one explosion was the result of a massive vehicle bomb, U.S. government sources said.

Now that human agency has been identified the next question will be who did it? No arrests or official accusations have yet been made, but Will Heaven, blogging in the Telegraph, cites three possible motives for an attack, all standard reasons for having incurred the wrath of al-Qaeda or a similar group. Others cite Norway’s attempts to deport an Islamic cleric, Mullah Krekar, who predicted dire consequences for Norwegian officialdom should they attempt to move against him. “Krekar’s defense attorney Brynjar Meling has tried to downplay Krekar’s remarks, saying they were merely a response to threats made against Krekar himself and in line with the teachings of the Koran.”

Yessiree…the cutout made a personal appearance

a “Save the Children” benefit concert, where organizers replaced him with an Obama cardboard cutout. Obama also won’t be around for Friday’s Nobel Concert.

Here he is on stage right: In other Oslo news, check out Michelle Obama’s Mirror’s Blog on Golden Geese Land in Oslo.

You can watch it live here (h/t The Corner).

Adding to the list of events Obama won’t be attending,

Plus the other events I mentioned yesterday.

According to a poll published by the daily tabloid VG, 44% of Norwegians believe it was rude of Obama to cancel his scheduled lunch with King Harald, with only 34% saying they believe it was acceptable.

“Of all the things he is cancelling, I think the worst is cancelling the lunch with the king,” said Siv Jensen, the leader of the largest party in opposition, the populist Progress party. “This is a central part of our government system. He should respect the monarchy,” she told VG.

I like that: a progressive populist defending the monarch.

Anyhoo, like the fox with healthy self-esteem who said “Jumping after those grapes was a great workout even when I couldn’t reach any,”

The Norwegian Nobel committee, which awards the peace prize, dismissed the criticism. “We always knew that there were too many events in the programme. Obama has to govern the US and we were told early on that he could not commit to all of them,” said Geir Lundestad, secretary of the committee.

Rest assured the committee members know that Obama respects them in the morning.