Oscar Perez, the former police helicopter pilot who last year attacked the Supreme Court and Interior Ministry, has been killed, according to government sources (emphasis added),

Oscar Perez, a Venezuelan police pilot accused of stealing a helicopter and using it to attack the country’s Supreme Court in June, was killed Monday in Caracas, a government official told CNN.

The high-ranking member of the Venezuelan government asked to remain anonymous. CNN has not been able to independently confirm Perez’s death.

“BREAKING NEWS: Óscar Pérez is wounded by an exploded grenade launched by security forces surrounding him. He denounces that Maduro’s regime is shooting at them and do not allow them to surrender.”

Roundup:
Venezuelan Helicopter Pilot Who Rebelled Against Dictatorship Livestreamed Raid that Killed Him

The assault was made public early Monday by Pérez himself, who posted video snippets on social media, including one in which he appears with a bloodied face.

“They are firing at us with RPG, grenades and grenade launchers, snipers,” Pérez says in one video. “There are civilians in here. We told them that we’re going to turn ourselves in and they don’t want to let us surrender. They want to kill us.”

A Day of Blood

A police operation for the capture of former CICPC inspector Oscar Pérez and his team took the entire day in Venezuelan social media. By 11:00 p.m., there was no official statement about his situation, only reports of the police takeover of the Bello Monte morgue, as an insinuation that his corpse might be there. Oscar Pérez’ group made a live digital recount of the assault they faced, uploading videos on his Instagram account (@equlibriogv) that showed what was happening. An unprecedented method that raised more suspicion than solidarity and prompted official mouthpieces to make unwise statements.

Two police officers and several “terrorists” have been killed in an operation to capture a helicopter pilot accused of leading an armed rebellion in Venezuela last year, officials say.

Venezuelan forces surrounded a house in the town of El Junquito, near the capital, Caracas, as they targeted the “cell” linked to pilot Oscar Pérez.

The authorities said they had arrested five people who they accuse of being part of a criminal group.

It is unclear what became of Mr Pérez.

The saga of a police pilot and former actor who authorities said stole a helicopter in June and tossed grenades over official buildings took another violent turn as government forces said they had engaged in a bloody shootout with him and supporters at their rural hideout.

Venezuelans watched on Monday as Oscar Perez posted videos online of the fighting between special-forces soldiers and his group of civilians and former military personnel.

“Venezuela, they’re killing us!” Mr. Perez said in a video amid gunfire as blood streamed down the side of his face. His fate wasn’t known Monday evening. He has been calling for rebellion against President Nicolás Maduro’s autocratic rule.

After hours without revealing what Oscar Pérez’s fate was, Justice Minister Néstor Reverol gave a news conference on Tuesday.

In it he said that Mr Pérez was among seven “terrorists” killed in the siege.

Emili Blasco, author of Boomerang Chavez: The Fraud That Led to Venezuela’s Collapse, reports that Nicolás Maduro’s new vice-president is none other than Tarek El Aissami, who, as you may recall has been tied to the Cartel of the Suns and to Islamic networks. El Aissmi was a key figure as Hugo Chávez allowed Hezbollah, Hamas and al-Qaeda to use Venezuela as a bridge to other Latin American countries.

Blasco asserts that El Aissami’s ascension blows the pretense of dialogue with the opposition (link in Spanish), and that

There’s also the issue of succession, as the country becomes more unstable,

The governor takes the vice presidency amid a push by the opposition to oust Mr. Maduro through a recall referendum, which polls show the highly unpopular president would likely lose if it were to take place.

Mr. El Aissami would assume the presidency if a referendum takes place and Mr. Maduro were to lose, although the proposed vote is tied up in courts amid government allegations that the opposition used fraudulent signatures in its petition.

El Aissami is not the only cabinet member who the U.S. is investigating on drug charges. Hugo’s brother, Adán Chávez, was named Minister of Culture, and Néstor Reverol, the current interior minister, last year was indicted on drug-smuggling charges by the U.S., highlighting, in Blasco’s opinion, Venezuela’s emergence as a narcostate.

The Wall Street Journal reported in 2014 that while El Aissami was its governor, Aragua was home to the explosives company Parchin Chemical Industries and the drone-makers Qods Aviation, two companies owned by Iran’s military and sanctioned by the United Nations Security Council for their involvement in the Islamic Republic’s nuclear and ballistic missile programs.

After Iranian Foreign Minister Mohammad Javad Zarif visited Venezuela last August, Emanuele Ottolenghi, a senior fellow at the Foundation for Defense of Democracies, speculated that one of the reasons for the trip was to shore up Iran’s ballistic missile program. Ottolenghi cited a recently-discovered contract between the two countries to jointly produce solid rocket fuel. 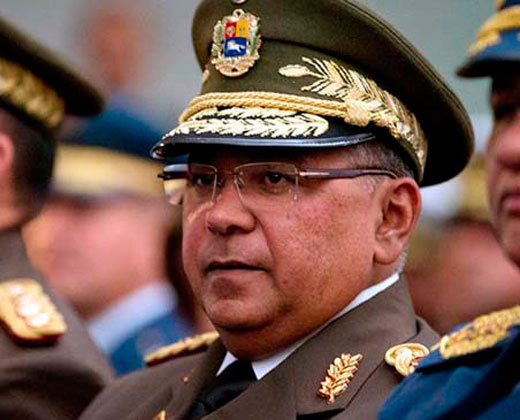