Néstor Kirchner fever hits Argentina:
Leonardo Míndez is keeping track of all the monuments, streets, public buildings and locations named after Néstor. There are almost a hundred, and counting. His hashtag is #PoneleNestorATodo, or #GetNestorOnEverything

There’s even going to be a Néstor Kirchner nuclear power plant after they rename the Atucha II plant. Atucha I is being renamed after Juan Domingo Perón.

Makes you wonder if Atucha I gets to keep the Perón name once Cristina is no longer of this world, but I digress.

Lest you think that Nestor is the new Evita (which, by the way, the day he died graffiti sprang all over Buenos Aires saying “Evita and Nestor, together in heaven”), to the best of my knowledge Evita Perón hasn’t had a rat named after her. Behold, Tympanoctomys Kirchnerorum: 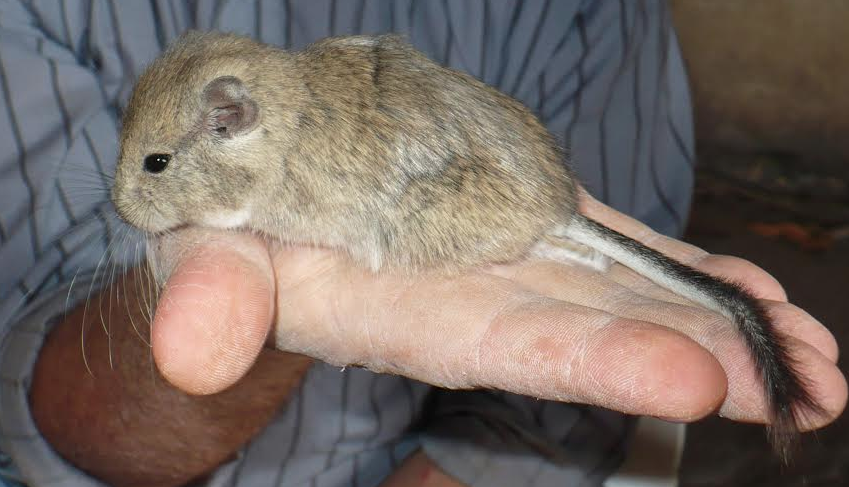 it was dubbed T. kirchnerorum as a tribute to Nestor and Cristina Kirchner for “their efforts in promoting science.”

No irony in that dedication.

“Bad vibes” is one way to call high inflation, near-default debt, persecuting economists, capital flight, takeover of private pension funds, Aerolíneas Argentinas and Repsol’s YPF, and the decline of the farming industry while the judiciary and media are under siege , and Cristina keeps making rude noises about the Falklands (between shopping trips to Paris).

AFP has a report in Spanish on the “K” decade,

Developers in Argentina have begun receiving letters from Google informing them that “Google Play will no longer be able to accept payments on behalf of developers registered in Argentina starting June 27, 2013.” The change applies to both paid apps and apps that use in-app purchases. The move appears to be related to new, restrictive regulations the Argentine government has imposed on currency exchanges, which The Telegraph detailed this past September.

Colombian Police Seize Over 4 Tons of Cocaine Bound for Mexico

CUBA
Alan Gross and his descent into hell

Venezuela’s $100 billion oil industry is seeing the first drop in funding in five years from some of its closest partners, as concern mounts President Hugo Chavez’s battle with cancer is creating a political vacuum, people familiar with the matter said.
The government, which for a decade has disclosed credit lines from China when they’re signed, has announced none since April, according to a report released Jan. 13 by the National Autonomous University of Mexico, known as UNAM. Russian and Indian companies are withholding planned investments in Venezuelan oilfields, according to eight oil company executives and consultants who declined to be identified because they weren’t authorized to talk about the matter publicly.

Chavez is not going quietly

Halitophobia! in Spanish, no less

Argentina rejects US ruling over foreign debt repayment
Argentina will appeal against a US ruling ordering it to pay $1.3bn (£800m) to foreign creditors holding bonds that it defaulted on in 2001.

I was in Buenos Aires the day Kirchner died, and the graffiti read, “Evita and Nestor, together in heaven”; Make room, Evita: Argentine leader seeks to put late husband Nestor Kirchner on Peron pedestal. The only surprising thing is that it’s taken Cristina two years.

CUBA
As predictable as a soiled diaper on a newborn baby

DOMINICAN REPUBLIC
The Dominican Republic’s Taxing Turn
Servicing its debt will take 44% of government revenue by 2015, despite steep new taxes.

A rum do
The new president faces a tax revolt

From darkness, dawn
After years of underachievement and rising violence, Mexico is at last beginning to realise its potential, says Tom Wainwright

1 of FBI’s 10 most wanted arrested in Mexico

PANAMA
Angry Panama
The earthbound bite back
Why is Latin America’s fastest-growing country so furious?

PUERTO RICO
The 51st state?
America may not want what its Caribbean outpost now does

The building up of a FARC/drug corridor in Venezuela

The week’s posts:
Venezuelan immigration to the USA quadrupled over the past 15 years

Mexico: No Iran or Hezbollah here

HONDURAS
Take a ride with me

MEXICO
Crime and politics in Mexico
A turning tide
With a year to go until the presidential election, voters are tiring of the drug war

“In Spain, I would still be living off scholarships.”

U.S. opposes Mexican’s execution
The Obama Administration takes the rare step of urging the Court to block temporarily a state from executing a convicted individual — in this case, a Mexican national who contends that Texas violated his rights under an international treaty, the Vienna Convention.

PERU
NATURAL RESOURCES IN PERU
The trials of miners

Among the reforms implemented since 2009, Gov. Fortuno enacted the largest tax cut package in Puerto Rico’s history, which will lower taxes an average 30 percent for businesses and 50 percent for individuals. And after launching one of the most advanced Public-Private-Partnership programs in the country, the Governor announced in June that Puerto Rico will receive $1.436 billion in private infrastructure investment—the largest such investment in any U.S. jurisdiction this year and the first infrastructure P3 in the country since 2006 – to upgrade and manage two of the Island’s major toll roads.
…
Fortuno took a 10 percent pay cut, required agency heads to take a 5 percent cut, froze all salaries for two fiscal years, reduced political appointments by 30 percent, and got rid of government cell phones and credit cards. Because payroll expenses dominated 70 percent of the budget, government employee ranks were reduced by 23,000 through voluntary and mandatory measures, achieving a $935 million or 17 percent reduction in total payroll.

VENEZUELA
Spanish newspaper: Chávez has colon cancer and the first surgery was a “mistake”

Hugo Chávez’s cancer puts 2012 Venezuela elections in doubt
As President Hugo Chávez fights what some experts say is an aggressive form of colon cancer, some wonder what it will mean for next year’s presidential race I was talking to a physician friend who had not read this article but who reached the same conclusion based on the information that we have so far:

He also said it’s possible that the original abscess drainage procedure itself could have contaminated the area with cancer cells. Treatment, doctors agreed, would be aggressive radiation and chemotherapy.

“Prostate tumors normally do not cause this kind of abscess,” said Leon Lapco, president of the Venezuelan-American Doctors Association and a surgeon at Mercy Hospital. “I would say it’s his colon, the large intestine. It’s the most likely to cause diverticulitis, perforations and abscesses.”

Chávez should get credit for economic miracle

After Chávez
What awaits Venezuela if he dies?

You wouldn’t know it from the photo-op,

“How is Cristina Fernandez de Kirchner managing her nerves and anxiety?” asked a cable dated Dec. 31, 2009, and signed “CLINTON” in all capital letters.

The cable, sent at 2:55 p.m. on New Year’s Eve, and originating in the department’s Bureau of Intelligence and Research, asked a series of other probing questions as part of what it said was an attempt by her office to understand “leadership dynamics” between Kirchner and her husband, former President Nestor Kirchner.

“How does stress affect her behavior toward advisors and/or her decision making?” the cable continued. “What steps does Cristina Fernandez de Kirchner or her advisers/handlers, take in helping her deal with stress? Is she taking any medications?”

Hillary wanted info on Nestor Kirchner’s temper, and what the hey were the Kirchners doing with the economy. Of course, that assumes that the Kirchners (Cristina and Nestor) had a clue as to what they were doing,

“Long known for his temper, has Nestor Kirchner demonstrated a greater tendency to shift between emotional extremes? What are most common triggers to Nestor Kirchner’s anger?” the cable asked.

The cable described Nestor Kirchner’s governing style as “heavy-handed,” and asked U.S. diplomats in Buenos Aires to determine whether Cristina Kirchner viewed “circumstances in black and white or in nuanced terms?” Does she have a “strategic, big picture outlook” or does she “prefer to take a tactical view?” it asked.

Other leaked cables offered insight into U.S. interest into a foreign minister’s past links with leftist Montoneros guerrillas, and suggested that Argentina had offered to intercede with Bolivian President Evo Morales, who expelled the U.S. ambassador to La Paz in September 2008.

Another confidential cable detailed Argentine umbrage at Assistant Secretary of State Arturo Valenzuela’s remarks in late 2009 suggesting that U.S. businesses had concerns over “rule of law and management of the economy in Argentina.”

“Once again, the Kirchner government has shown itself to be extremely thin-skinned and intolerant of perceived criticism,” the cable said.

The Argentine anger at Valenzuela contrasted with the good relations it held with his predecessor, Thomas Shannon, an Oxford-educated U.S. diplomat with a smooth manner. According to the Madrid daily El Pais, a not-yet-public cable dated Sept. 2, 2008, reveals how Shannon convinced Kirchner that Washington did not have anything against Morales, Bolivia’s first indigenous leader, and did not seek to break apart his country.

Good for Shannon. Evo, who recently kneed a guy in the gonads during a friendly soccer game, is a lunatic in power.

No wonder Hillary asked about meds.

In today’s podcast at 11AM Eastern, a few notes on my trip.

Two articles in The Economist regarding Kirchner:
Back to a vacuum
The passing of kirchnerismo
Néstor Kirchner’s sudden death will hasten change in Argentina, and beyond

And, in today’s news,
Lawmaker proposes Argentina’s companies to distribute 10 per cent of profits

You can listen to the archived podcast here.