As I posted earlier, Venezuela’s opposition was trying to collect 200,000 signatures needed for a petition to recall dictator Nicolás Maduro.

Huge crowds turned up. Somebody even photoshopped Hugo Chávez up from the grave,

The opposition’s recall petition is the first in a three-stage process that would last at least eight months and would need to surmount possible procedural obstacles from the Supreme Court and the electoral court, both staffed with Maduro loyalists, according to constitutional and political experts.Opposition leader Henrique Capriles, who is spearheading the referendum drive, said the opposition collected 1.1 million signatures on the first day, well above the threshold of 198,000.

The signatures will be submitted to the National Electoral Council, known as CNE, which will then have 20 days to authenticate them and the accompanying fingerprints. If it does, the opposition must then collect nearly four million signatures in three days to trigger the actual recall vote.

To recall Mr. Maduro and force new elections, they would have to garner more votes than the 7.5 million the president got in the 2013 ballot.

I am extremely pessimistic that it would have any effect:

It is now official:

Venezuelan electoral authorities have confirmed that the opposition has won a key two-thirds majority, enabling it to challenge President Nicolas Maduro.

There are positive reactions, Venezuela Awakens From Its 17-Year Socialist Nightmare, which it has. John Hinderaker said, HASTA LA VISTA, SOCIALISM!

As you may know, I am delighted that the opposition won decisively and overwhelmingly over the chavista‘s PSUV. I just can’t join Hinderaker in bidding socialism good-bye yet.

For instance, there’s the talk,

You talk in order to maintain the illusion a conversation is still possible. The voters in Venezuela, after 17 years of voting Chavismo into power, believe they can vote Maduro out of office. The opposition may now have 113 seats in a 167-member assembly, a two thirds majority.  Maduro gone, right?  Well not necessarily. As the Chavista president reminded the voters: voting out socialism is no ordinary matter. Whatever you do, you can’t stop the revolution.

Maduro’s arguments are another way of asserting what we hear from time to time. When the “gains” of  a messianic system become too great to reverse, they become too important to ever be given back. Other projects of equal weight, like the formation of the European Union, are of such importance that they adhere to the principle of “vote until you get it right.” For example,Ireland and Denmark were put through two referendums until they accepted the desired result. In the things that really matter, the moral arc of history — not uninformed public opinion — gets the last word.

The tweet,
“Here we are, the children of Bolívar and Chávez, [standing] Firm!!! #WithOurMoraleIntact”
The poster reads [my translation],


“No crying in defeat”

It was precisely that aspect of Lenin’s activity which allowed him to build an army of soldiers committed to the end to our cause, and confident in its strength.
Josef Stalin’s speech to Kremlin army cadets
[Note: I could not verify that the quote is authentic, but the message is clear.]

The chavistas are not happily riding into the sunset, there are plenty of foreign actors involved in Venezuela (Cuba, the FARC, Iran and its proxy Hezbollah), the opposition is not a uniform lot, and the people are impatient for results.

A lot can happen between now and the new National Assembly’s January 5th inauguration. 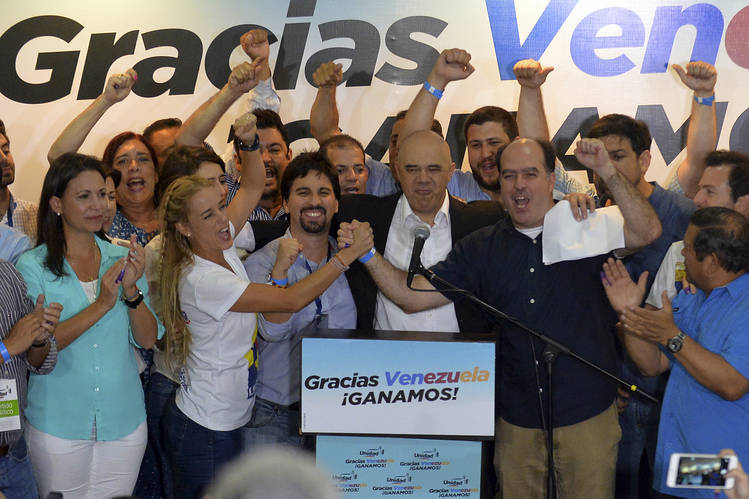