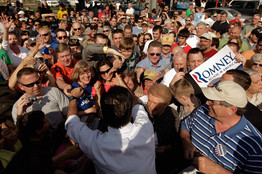 7PM: The polls closed in Puerto Rico nearly four hours ago and the latest results show that Mitt Romney won by a big margin.

Mitt was the favorite, and I predicted two days ago that he would win. In his favor:

Bear in mind that, in order to vote in the Republican primary, Puerto Ricans had to declare themselves Republicans, and

Only voters affiliated with the governing New Progressive Party were permitted to cast ballots in the island’s Republican primary this year – a requirement that obligated pro-Republican Puerto Ricans to declare their support for statehood.

Santorum campaigned briefly in the island and was considered to be the only other contender; his odds went way down once he got into the subject of language.

Newt Ginrich got less that 4% of the vote, and Ron Paul came in under Fred Karger and Buddy Roemer.

In one of the opening skirmishes in the long – and almost certainly bloody – GOP battle for the 2012 nomination, former Massachusetts governor Mitt Romney won the annual Conservative Political Action Convention straw poll Saturday.

While hardly a scientific poll, the CPAC straw vote offers early insight into conservatives’ thinking as Republicans find themselves shut out of power in the White House and Congress for the first time in 16 years. And Romney’s victory will give some credence to growing sentiment that he has quietly put himself in strong position for the 2012 contest after losing to John McCain last year.

To those of us present at CPAC last year it came as no surprise that Romney won the straw poll this year. Last year’s CPAC came to an abrupt end the moment Romney gave the most rousing speech I’ve ever heard him give… to resign.

The rest of the results favored the polliticians who were present.

Straw poll results or not, the conservative movement has its work cut out for it: leadership.