Don’t expect the case to be over, either. 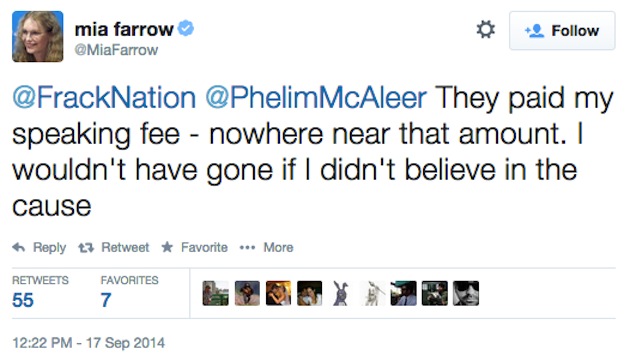 Mia Farrow’s turned her gaze to Ecuador, and tweeted,

I'm in Equador to check out the toxic #mess left by Texaco-#Chevron pic.twitter.com/Z9BCDUIeRu

Jack Fowler has the real story,

The suit against Chevron seeking nearly $20 billion has been quarterbacked by notorious U.S. trial lawyer Steven Donziger, funded by liberal hedge funds and lobbying firms, publicized by outrageous media bias (led by CBS’s 60 Minutes), made a cause célèbre by the usual suspects (Mia, Sting, Danny Glover, Cher, and Daryl Hannah), and legally aided through the Ecuadoran courts by corrupt bureaucrats and bought-off judges (all of whom have come to admit such).

It’s hard to generate compassion for an Oil Giant, but the degree of misconduct, conspiracy, and foulness concocted against Chevron has been so severe, so bald, so criminal, that eight U.S federal courts have found the case against Chevron to have involved fraud.

The wheels are coming off the bus: Mr. Donziger, the defendant in a recent RICO trial, now awaits a verdict from one of those courts.

Ecuador’s National Secretariat for Communications (SECOM) has placed the freedom of expression organization Fundamedios under its administrative control. The organization believes this action seeks to harass them and fears it could lead to its dissolution.

A case to watch is that of former Ecuadorean police commander Edgar Vaca, who is accused of human rights abuses. Vaca is one of the authors of TERRORISMO Y SUBVERSIÓN: La verdad que no se ha dicho, which has been denied publication as a book by the Correa administration.