After being in office for four years, the numbers are not good: 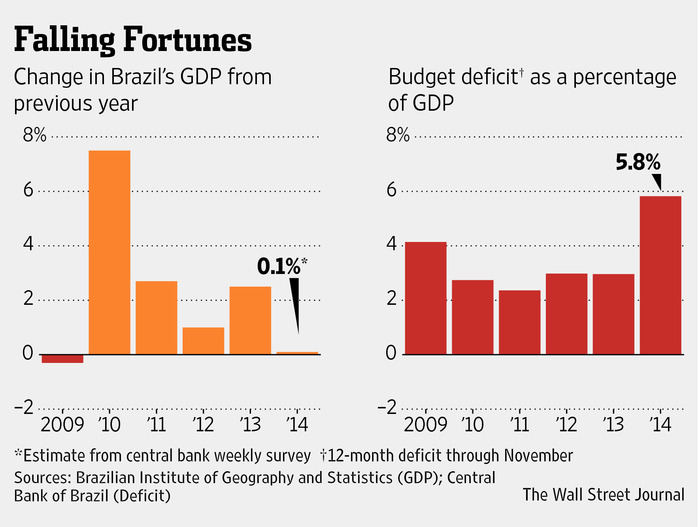 In an inauguration ceremony that was upbeat but drew sparse applause and little spontaneous celebration by her supporters, Ms. Rousseff extolled her legacy of poverty reduction while outlining a vision to get Latin America’s largest economy back on track.

“We will prove that it is possible to make adjustments to the economy without repealing rights that have been won or betray social commitments,” she said in a speech in Brazil’s Congress attended by cabinet members, foreign dignitaries, allied lawmakers and other officials.

But the darkest cloud on the horizon for Ms. Rousseff might be the fast-moving corruption scandal at Petrobras.

Brazilian prosecutors allege that executives at Petrobras conspired with construction companies to inflate the cost of contracts, skimming off as much as $1.5 billion, by the estimate of Brazil’s budget watchdog, to enrich themselves while funneling kickbacks to Ms. Rousseff’s Workers’ Party and its allies.

Ms. Rousseff hasn’t been implicated in the scandal, and leaders of her party have repeatedly denied allegations of involvement. Police have already filed charges against 36 suspects, including two former Petrobras officials.

There are two things to bear in mind:
1. The enormous amounts of money handled through Petrobras (and the temptation/opportunities for corruption)
2. Brazil’s antecedents when it comes to scandals and prosecutions

Related:
Blast from the past: The Economist explains What is Brazil’s “mensalão”?

The Mensalão trials convicted 25 people over a scheme to pay opposition politicians 30,000 reais (around US$12,000 at the time) every month in order to vote for legislation favored by then-president Luiz Inacio Lula da Silva. “Mensalão” means “big monthly allowance”, and it was. The scandal burst into the scene in 2005.

The trials also brought up charges of illegal campaign contributions from Cuba and the FARC, but nothing much came from those allegations.

Lula’s own chief of staff, Jose Dirceu, was sentenced to 10 years and 10 months, while Lula to this day insists that he knew nothing.

So far, no one has served time in prison.

As you may recall, the convictions were appealed. Back in September I predicted that would take years, but Brazil’s Supreme Court has now upheld the jail terms of 23 out of the 25 people sentenced:

Brazil upholds corruption jail terms
Brazil’s Supreme Court rules that most of the 25 people convicted in the country’s biggest corruption trial should start their prison sentences.

Folha de Sao Paolo, which first uncovered the story, has extensive reports (in Portuguese) on the trials. So far, Dirceu has not turned himself in to the police, which in turn awaits the court orders from the Supremo Tribunal Federal (STF) (Federal Supreme Court) to jail the people involved. 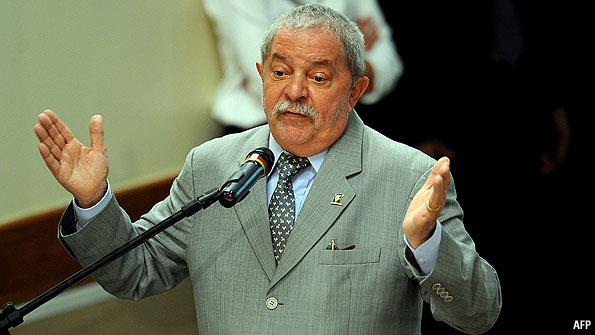