Readers of this blog know that I have been consistently very tough on Puerto Rico’s mismanagement and debt.

First Hurricane Irma, and now Hurricane Maria, have left the island and its 3.5 million American citizens, plus others who went there from the Lesser Antilles seeking aid after Irma’s destruction, in a most critical condition.

Most people have no jobs to go back to, especially if their businesses were destroyed.
This is what most roads are like: 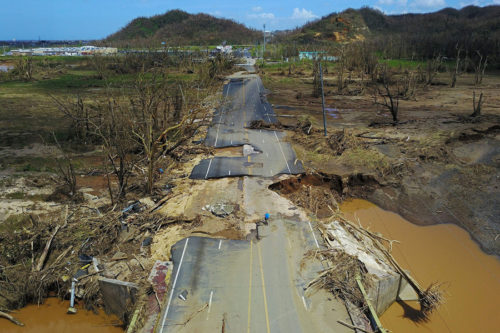 Worse yet conditions in the mountains, with landslides.

And the farther away you are from the metro areas, the lesser the chance of help reaching you soon.

Governor Ricardo Roselló does not exaggerate when he speaks of humanitarian crisis (emphasis added):

Stressing that Puerto Rico, a United States commonwealth, deserved the same treatment as hurricane-ravaged states, the governor urged Republican leaders and the federal government to move swiftly to send more money, supplies and relief workers. It was a plea echoed by Puerto Rico’s allies in Congress, who are pushing for quick movement on a new relief bill and a loosening of financial debt obligations for the island, which is still reeling from a corrosive economic crisis.

You can kiss the debt good-bye.

Here’s the situation, and pay attention because I’m only saying it once:

Puerto Rico has no money.

Most of the island has been destroyed by the elements.

It’s not simply that “there ain’t no ‘there’ there.” What there is left, has to be cleared, removed, rebuilt.

Thankfully, help from FEMA, the US Coastguard and Navy is arriving.

The problems are immense,

Authorities have reopened Puerto Rico’s biggest port but say efforts to speed relief supplies to the island devastated by Hurricane Maria are being hampered by heavy damage to roads, computer systems and other critical infrastructure.

Cargo ships carrying supplies from the mainland U.S. began arriving at San Juan’s port on Monday. But distribution of water, food and temporary shelter is building slowly, federal officials and private companies taking part in the relief efforts said, with thousands of shipping containers waiting for transport at the port.

I estimate that at least a million Puerto Ricans are coming to the 50 States in the next six months. As U.S. citizens, they can, and will, do so legally.

The consequences of this migration will be very severe, both for the States and for the Island.

In order for those who leave to return, they would have to have confidence in the island’s economic future.

America has done it before, and in a much larger scale: The Marshall Plan.

Leave Puerto Rico on its own, and you’ll have yet another narco-terrorist enclave. On whatever is left.

A Marshall Plan may be needed, but it must be with heavy outside supervision

To which I replied, Absolutely, YES. Only with outside supervision and full transparency.
Otherwise the effort, time and money will be squandered, just as so much has in the past.

A Marshall Plan, not a blank check.