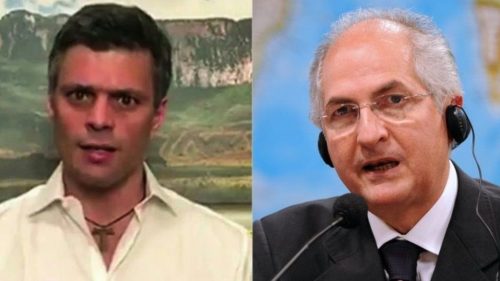 The dictatorship in Venezuela kidnaps @leopoldolopez from his house one hour ago @BBCWORLD @CNN @EL_PAIS @UNIVISIONpic.twitter.com/Xg3vA9ASkz

As for civil war, only one side is armed. What’s Next For Venezuela?

Nobody knows for sure what the end game is

Spain’s El País reports that opposition leader Leopoldo López has been released from jail and is now under house arrest:

Venezuelan political prisoner Leopoldo López, age 46, has come out of Ramo Verde prison . López, jailed since February 2014, is now under house arrest at his home, where he arrived at dawn on Saturday, as his Spanish lawyer Javier Cremades confirmed to EL PAÍS. The Venezuelan opposition leader returned home without having accepted any conditions for his release, according to Cremades. This new measure – known in Venezuela as “house for jail” – coincides with three months of very intense protests against Nicolás Maduro’s regime which left 89 dead.

The Venezuelan Supreme Court confirmed granting the house arrest in this tweet,

After more than 1235 days in solitary confinement in a military prison LEOPOLDO LOPEZ IS RELEASED AND IS NOW UNDER HOUSE ARREST. A heartfelt thank you to those who have cared, and who have kept the pressure on the Venezuelan dictatorship. This is a good day, a very good day.

“@leopoldolopez‘s house arrest is only a first step. We demand the release of all political prisoners!!”

WaPo now has the story.

You can watch La Patilla’s live feed on YouTube; they are at López’s house. [watch below the fold]

END_OF_DOCUMENT_TOKEN_TO_BE_REPLACED

Jailed opposition Venezuelan politician Leopoldo Lopez is well and is urging street demonstrators to keep up massive anti-government protests, his wife said on Sunday after her first visit with the former presidential hopeful in over a month, putting to rest rumors of his ill health.

“Let’s go. We can’t stop until we achieve our freedom. I’m on the streets with you, in mind and spirit, and if I were there, I’d go first.”

The regime should, but won’t, allow López to be seen by the general public. 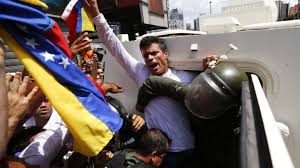 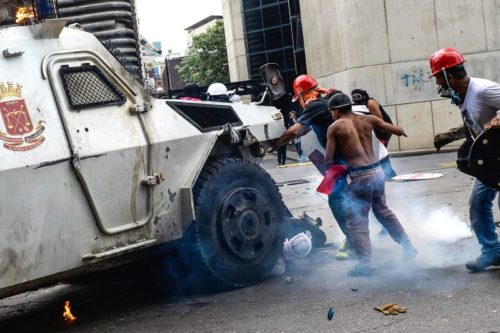 Steve Hanke tweeted the graph on the world’s most miserable country,

My newest for Forbes: #PDVSA faces $10B in payments but reports estimate it only has $2B to service debt obligations https://t.co/PsKQCtuUDb pic.twitter.com/EE9WOlacWM

To put PDVSA’s depletion rate into perspective, let’s compare it to Exxon’s. At the end of 2015, Exxon’s depletion rate was 8.15% — which is comparable to most of the world’s major oil companies. That rate implies Exxon’s median time to extraction (and sale) for a barrel of oil is 8.2 years. That’s 190 years earlier than PDVSA would realize revenue from selling a barrel of oil. Given the rate at which Exxon is depleting its reserves, they are worth something. Indeed, if we discount at 10%, Exxon’s reserves are worth 46% of the well-head value. Not zero, as is the case for PDVSA.

So, with the way PDVSA operates, it is exploiting reserves so slowly as to render them, on average, worthless. If that’s not bad enough, PDVSA is generating negative cash flows and piling up a mountain of debt (see the chart above). The arithmetic does not look good. PDVSA faces $10 bil. in interest and principal payments this year, but reports estimate that PDVSA only has $2 bil. in cash to service its debt obligations. In principle, the government could come to the rescue. But, its stated reserves have dwindled to below $10.5 bil.

Workers at Venezuelan steelmaker Sidor are planting sunflowers and vegetables on company premises to ease a national food deficit as steel output has almost ground to a halt nine years after the company was taken over by the government.

In other headlines:
Congratulations Bolivarian Socialists, Venezuela Caught Up With North Korea

That’s according to the recent 2017 Index of Economic Freedom ranking, which places Venezuela in 179th position — next to North Korea, which occupies the 180th.

Published by the Heritage Foundation, the Economic Freedom report measures such things as trade freedom, business freedom, investment freedom, and the degree of property rights protection in 180 countries actually ranked.

Venezuela is also catching up with North Korea in corruption, while it is well ahead in inflation, which runs at 800%.

Peru’s president recalls envoy over attacks by Venezuela, after Nicolás Maduro referred to Peruvian president Pedro Pablo Kuczynski as a ‘coward’ and a ‘dog’ subservient to US, following PPK’s White House visit – the first by a Latin American president.

At the blogs:
How long is it going to take to crawl out of this hole?

The WSJ editorial board Trump’s Best Tweet. He speaks up for freedom in Venezuela, unlike his predecessor.

Taking no chances of anyone noticing, the Maduro government on Wednesday shut down CNN En Español, the nation’s last remaining source of independent news.