It gets worse. In this video, you can see the National Guard murdering a civilian in La Candelaria (at 1:52)

this video from reader KM in Altamira as stormtroopers drive by shooting all around!!!

From the Caracas Chronicles comments:

EVERYBODY PLEASE SHARE THIS IN YOUR FACEBOOK PAGES.
Venezuela’s president has shout douwn TV news.
Internet is the only hope for Venezuelans.
We are the media now. PLEASE SHARE. We can do something by sharing this with the world!!

News media:
Prosecutors want up to 10 years in prison for Leopoldo López

The Venezuelan opposition leader was charged with the crimes of arson and damages, solicitation to crime and conspiracy. The latter is the most serious one and it is designated in the Organic Law against Organized Crime and Funding of Terrorism, punished by imprisonment for 10 years

The US & Canada bring up Venezuela at the OAS: EEUU y Canadá llevan a OEA caso de Venezuela

UPDATE:
Exclusive: Read the Speech Venezuelan Opposition Leader Leopoldo López Made Before He Was Jailed

Linked to by Extrano’s alley and TeeJaw Blog. Thank you!

Linked to by PaGunBlog. Thank you! 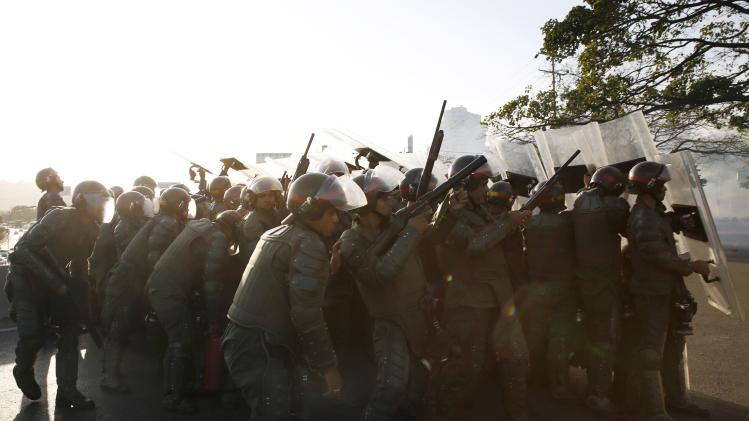 Linked to by Noisy Room and Designs on the Truth. Thank you!

The Scotsman: Venezuela: Third night of riots over dead students

Following the bloody events of last Wednesday, while countries such as Argentina, Cuba, Bolivia, Ecuador, Nicaragua expressed their full support for the Venezuelan government of President Nicolas Maduro, others were more cautious such as Washington and the Europe Union calling for restraint and dialogue, but Chilean president-elect Michelle Bachelet openly twitted her rejection to repression, to President Maduro and called for a plebiscite.

Blogs:
Altamira then and now: a Venezuelan spring?

Is This the End of Hugo Chavez’s Venezuela?
In the midst of runaway violence, inflation, and shortages of basic goods, Venezuela’s youth have taken to the streets—to take on its Orwellian government. Venezuelan bloggers:
There are some tweets that illustrate the fascist nature of the Venezuelan regime.

Venezuelan Protest and Violence As Seen From Afar

The day hegemony was unleashed

UPDATE:
3 dead, 66 people injured, and 69 arrested as of the time the question was asked, and the State Dept. doesn’t know squat. Too bad the State Dept. spokeswoman didn’t read this blog before heading out for the briefing (emphasis added):

QUESTION: I have a couple of questions on Venezuela.

QUESTION: I’d like to ask if you have any comment about the violent protest that took place yesterday there and the lack of coverage provided by the local TV. And also, this morning the Venezuelan foreign minister in an interview blamed an opposition politician, Leopoldo Lopez, for violence that took place yesterday and said that Lopez and his acolytes have been financed by the U.S. Government for a long time. If you please have a comment on those two points, I would appreciate it.

MS. HARF: Yeah. Well, let me see if I can get some specifics on what’s happened in the last few days. In general, when it comes to Venezuela, we’ve made clear that we’re open to having a constructive relationship with the Government of Venezuela. Quite frankly, we haven’t seen that – we have not seen that reciprocated, to be clear. So we also, I think, see a lot of conspiracy theories or rumors out there in the press about how the U.S. is interested in influencing the domestic political situation in Venezuela, which is absolutely not true. It’s not up to us to comment on internal Venezuelan politics. So I’m happy to check with our team to see if there is more specifics about the protest specifically that I’m not as familiar with, and see if we can get you something on that.

QUESTION: Okay. I would appreciate that because there were 3 dead, 66 people injured, and 69 arrested.

MS. HARF: Yeah. No, it’s a good question. And apologies that I don’t have something in front of me on that, so let me see what I can do.

QUESTION: Okay. Thanks so much.

My friend Ed Morrissey asks, is Venezuela on the edge of collapse?

Under the slogan “The Exit”, meaning the departure of Mr Maduro from power, hardline opposition groups have for the last fortnight been staging protests over the country’s searing crime, corruption, rampant inflation and shortages of basic goods.

But Leopoldo López, the opposition leader now in hiding from an arrest warrant on charges of homicide and conspiracy, said the government had instigated the bloodshed in order to discredit his peaceful movement.

The opposition blames armed pro-government militant groups known as “colectivos” for attacking their marches. Several times during Wednesday’s rally the cry went up: “The colectivos are coming!”, sending some demonstrators running for safety. One of those killed was a well-known colectivo leader from “January 23”, an impoverished hillside barrio in Caracas that is a key revolutionary stronghold.

And CSM makes a point (emphasis added): Venezuela: Could protesters’ deaths hurt fractured opposition? (+video)
Thousands of protesters came out nationwide yesterday to call for Venezuela’s President Maduro to step down, but the death of at least two people could give the government the upper hand.

Despite both political camps trading blame, observers warn that the recent antigovernment push to take to the streets could backfire on the fractured opposition. The unrest could offer the Maduro administration a welcome diversion from the slew of problems plaguing Venezuela.

“The government is in the best position to take advantage of the situation,” says political analyst Luis Vicente Leon, head of the Caracas-based polling firm Datanalisis. “The violence provides a scapegoat for the crises at hand.”

Back to Ed’s question, is Venezuela on the edge of collapse?

Venezuela “collapsed” into a Communist state guided by Castro’s Cubans years ago. For years after Hugo Chavez declared himself a Marxist, I have documented the corruption and chaos, the expropriations of private property, the Chavista takeover of the media, and their control of all Venezuelan institutions: the military, the judiciary, the legislative, and the state governments, not just the presidency.

While Venezuela’s oil production has severely declined over the years, oil is still hovering the $100/barrel magical number. Yes, Venezuelan oil is heavier, etc, etc. The fact remains that Venezuela still is an oil producer, and the USA’s misguided energy policies add to Venezuela’s coffers.

Venezuela’s also an ally of Iran, another oil producer that has managed to retain a repressive totalitarian regime, even in spite of UN sanctions.

The Cuban puppet masters are the most effective propaganda masters in the history of the Western world. They will make the revolting students (all puns intended) the bad guys.

But the fact remains that the students are going it alone: Not one country in our hemisphere, let alone the world, has publicly expressed support. Most importantly, no one in Venezuela’s military appears to be behind them.

So, to answer Ed’s question, no, Venezuela is not collapsing. It is well down the road to repression. The current regime will continue for many years to come, be it with Maduro, or Cabello, or someone else at the presidency.

And I pray to God I’m wrong.

UPDATE
Related:
Cuba Moves In for the Kill