John Hawkins lists his 50 favorite political quotes of the year, and I thought it’s time to do a roundup. It brings traffic, I’ve been doing a lot of things not related to blogging, and the to-do list is still not half done.

Jamie Glazov usually has interesting guests, but this time his guests got into a fight. I just hope Jamie doesn’t decide to run for mayor of Cincinnati.

The College Conservative remembers My Time at Walmart: Why We Need Serious Welfare Reform, via Gerard, who also has the Best Magazine Cover of 2011.

The transfer was small compared with the estimated $1.2 billion in customer funds still unaccounted for more than seven weeks after MF Global collapsed. The bankruptcy trustee for MF Global’s U.S. brokerage unit has said recovering money from the company’s trading partners would be easier if counterparties knew they were accepting funds belonging to customers. It isn’t clear how MF Global responded to J.P. Morgan’s Oct. 29 letter. The letter hasn’t been publicly released by regulators or investigators.

The letter indicates that J.P. Morgan officials knew the money came from segregated customer accounts, because it specifically asked whether the transfer of funds from customer accounts was compliant with regulations. Customer accounts can contain both customer and firm funds. On Oct. 30, or the day after the letter was sent, MF Global alerted regulators to a shortfall in customer funds. It filed for bankruptcy protection on Oct. 31.

The EPA’s unconscionable war on fracking, but particularly on companies that produce fossil fuels. I can not understand how it’s in the USA national interest to not exploit our own natural resources and remain dependent on foreign oil.

In the Latin America beat,
Stacy has the latest on Mercosur and the Falklands. Mercosur also signed a trade deal with the Palestinians, but postponed allowing Venezuela to join Mercosur. They must be waiting for more of Hugo’s largesse.

A book of condolences was opened at the North Korean embassy in Havana, with a big photo of the dead leader and flowers in the entrance.

Nicaragua, Venezuela and President Mugabe express their sorrow, too. Not surprisingly, they celebrate tyranny.

Now that Kim Jong Il is no longer, all the news outlets have gone out of their way to describe the despicable despot as “North Korean leader”, and his spawn as “North Korea’s new leader Kim Jong Eun“, about whom we know nearly nothing. Not even his age.

Eun is also spelled Un, depending on where you look, which makes me wonder if we’ll have another Gaddafi/Khadaffi/whatever multiple-spelling situation.

Be that as is may,

The state funeral for Kim Jong Il is scheduled for Dec. 28. North Korea has said no foreign delegations will be accepted.

The old son of a bitch may have been dead for months for all I care. The South Koreans are worried enough they’ll not light up the Christmas tree,

To remove a potential flashpoint, South Korea’s cabinet decided Tuesday it wouldn’t allow church groups to illuminate three large Christmas-tree shaped towers near the North Korean border. The giant towers, located about two miles from the border and visible from the North Korean town of Kaesong, were scheduled to be illuminated on Friday.

North Korea remains in the dark, regardless: 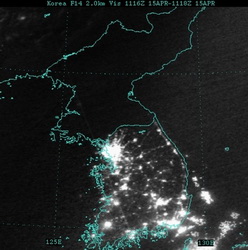 Leader? Please, a murderous tyrant should be called exactly that.

How can they tell?

In September 2010, Kim Jong Il unveiled his third son, the twenty-something Kim Jong Un, as his successor, putting him in high-ranking posts. A hostage release, a huge propaganda coup, and, very likely, the end of the six-party negotiations:

The WSJ looks at
Paying Kim’s Price
Was Mr. Clinton’s visit the down payment for a larger set of American concessions?

We don’t begrudge the congratulations Bill Clinton deserves for saving the two journalists from what might have been a nightmare 12 years of hard labor; that was the sentence a kangaroo North Korean court imposed for allegedly blundering across its border with China in March. But the important question going forward is whether Mr. Clinton’s visit was merely the down payment Kim extracted from the Obama Administration for a potentially larger set of American concessions.

That question is hard to avoid given that Mr. Clinton was met at the Pyongyang airport by Kim Kye-gwan, North Korea’s top nuclear negotiator. North Korea may have had its own propaganda reasons for putting its diplomat in the photo-op, and the White House insisted that Mr. Clinton’s mission was strictly humanitarian and that he was not carrying any messages from President Obama. We hope that’s true.

Yet Mr. Clinton’s visit is a message unto itself. It will bolster Kim’s bid to dissolve the six-party negotiations in favor of the direct talks with the U.S. he has long sought. It will also dismay some in South Korea and Japan, which have their own hostages in North Korea and will wonder why Mr. Clinton couldn’t obtain their release as well.

If it turns out that if a new nuclear negotiation really was begun during Mr. Clinton’s visit, it will also send the signal to North Korea that the worse its behavior, the more it stands to gain from the U.S. And it will mean that Kim’s price will be even higher to spring the next American hostages.

For years the North Koreans have wanted one-on-one negotiations with the US. They have them now.

Darleen congratulates Mr. Clinton, and waits for the other shoe to drop.