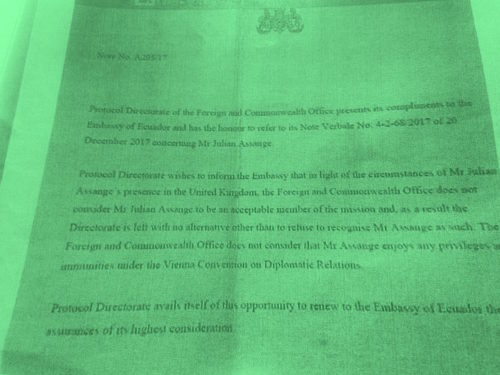 As surprising as the Brexit and Trump wins, early results show Guillermo Lasso as the winner of today’s runoff presidential election.

There is no word from the elections commission on how soon official results will be made available, but Lasso tweeted in the last hour,

As for Julian Assange,

The first runoff results were not made public for almost four days.

Julian Assange, still hiding in full view at the Ecuadorian embassy in London, sent a letter to the XV Encounter of the Network of Intellectuals, Artists and Social Movements in Defence of Humanity, held in Caracas, Venezuela (who knew there was such a thing?) earlier this week, praising Hugo Chávez, whose “virtues shook the world:”

[Former Venezuelan president Hugo] Chavez played the most important role on the global stage, with his tireless efforts to continue down the path of regional integration and cooperation and build a multi-polar world.

He denounced injustices as he saw them and in 2001 was the only leader to denounce the killings by the US of innocent civilians in Afghanistan, noting, “You cannot fight terrorism with terrorism”. A little over six months later, the US supported a coup against him that was defeated when hundreds of thousands of Venezuelans took to the streets, many of them with the constitution in hand.

Like all of us, he was not free from sin, but his virtues shook the world.

He says that as if it were a good thing, but I digress.

Assange went on to denounce Australia, Sweden, the United Kingdom, and the United States (of course) as servants of imperialist interests.

Assange’s letter was timed to coincide not only with the latest Wikileaks dump, and the Venezuelan-hosted Encounter, but also with Ecuador’s upcoming runoff election.

Assange did not take time to show solidarity with starving Venezuelans eating garbage.

Assange is not your friend.

Under Correa, Ecuador was the South American country that most increased public spending during the oil boom years, Hidalgo says.

Public spending grew from 25 percent of the gross domestic product to 44 percent. The number of public employees swelled, and the government went from having 15 cabinet ministers before Correa to 30 ministers currently, he said.

And during that period, Correa hit private businesses with hundreds of regulations and more than 20 tax reforms, sowing growing confusion and scaring away private investments.

During his 10 years in power, the government sector’s participation in overall investments more than doubled from 20 percent to 52 percent, the CORDES figures show. Not surprisingly, when oil prices started to fall, investments came to a standstill.

As for the runoff,

The only reason why Ecuador will have a runoff is because numbers don't lie. But correístas do. Cannot trust these guys with #dollarization.

Meanwhile, opposition candidate and runoff frontrunner Guillermo Lasso said yesterday that, if he wins, Julian Assange will be asked to vacate the Ecuadorian embassy in London, but “we vow to take all the steps necessary so that another embassy will take him in and protect his rights.”

Good luck with finding Assange a new embassy to live; the WaPo reports that his relationship with the Ecuadorian embassy staff has been strained for years.

In an attempt at demonizing any opposition, presidential candidate Hillary Clinton tars the Trump supporters as deplorable and/or clueless, and later tried to walk it back, making what even Mexican media called a half apology.

ARGENTINA
Uber Drivers in Argentina Could Face 10 Days in Jail. Officials Raid Buenos Aires Offices and Plan to Charge them for Operating Without a Permit

Protesters Set Up 100 Soup Kitchens in Argentine Capital. What took them so long?

The efforts to reopen the complaint filed by late AMIA special prosecutor Alberto Nisman against former president Cristina Fernández de Kirchner in January last year will continue this week with a hearing at an appeals court to determine if Federal Judge Daniel Rafecas had reason to deny such a petition from the DAIA Jewish community group last month.

In parallel, Federal Judge Claudio Bonadio has been making progress in an accusation of treason against Fernández de Kirchner and former foreign minister Héctor Timerman in relation to the Memorandum of Understanding (MOU) with Iran.

If you can’t make it to the event, you can watch it live online at www.cato.org/live and join the conversation on Twitter using #Brazillionaires. Follow @CatoEvents on Twitter to get future event updates, live streams, and videos from the Cato Institute.

The Secret History of Colombia’s Paramilitaries and the U.S. War on Drugs. After decades of atrocities, the warlords were finally being held to account. Then the Americans stepped in.

HAITI
Hillary Cares About You? Ask the Haitians She Ripped Off

Syrian native Abu Wa’el Dhiab has repeatedly said he is unhappy in Uruguay and is demanding he be allowed to leave the South American country, which took him in with five other former Guantanamo prisoners in 2014.
. . .
Although there’s nothing impeding Dhiab’s family from coming to Uruguay, the former prisoner is against it, Mirza said. “We’d have to ask ourselves why his family could not come to Uruguay when the families of other Guantanamo refugees came here when they wished.”
. . .
Dhiab also says that he feels like a prisoner in Uruguay.

A prisoner who traveled to Argentina, and through Brazil to Venezuela, that is.

VENEZUELA
FROM VOODOO ECONOMICS TO VOODOO

Almost 60 Percent of Venezuelans Say They Want Out