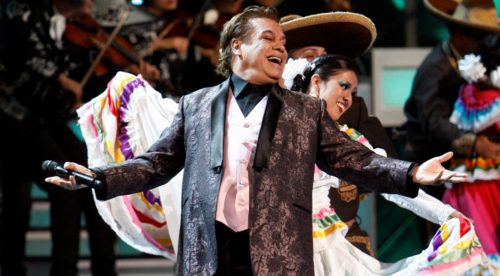 The estate of Mexico’s best-selling performer of all time is contested in Florida:

Three of the children of Mexican crooner Juan Gabriel, a national idol who died in late August at the age of 66, came together face-to-face for the first time on Wednesday inside a courthouse in Broward County, Florida. The artist’s will, which has been made public, establishes that his son Iván Aguilera is his universal heir.
…
A month ago, a 42-year-old woman named Claudia Gabriela Aguilera stepped into the limelight claiming to be Juan Gabriel’s daughter. She showed the television network Telemundo the document proving her relationship with the crooner, but did not show up at the hearing, either.

In the meantime, Joao has filed around a dozen lawsuits against Iván Alguilera, the universal heir, in a Florida court. One of the motions, to which EL PAÍS has had access, even questions whether Iván is genuinely one of Juan Gabriel’s children, and calls for a DNA test to be carried out to prove it.

In other JuanGa news, Juan Gabriel was Mexico’s gay icon — but he never spoke of his sexuality, and last year Juan Gabriel’s Alleged Boyfriend Is Given the Tabloid Treatment.