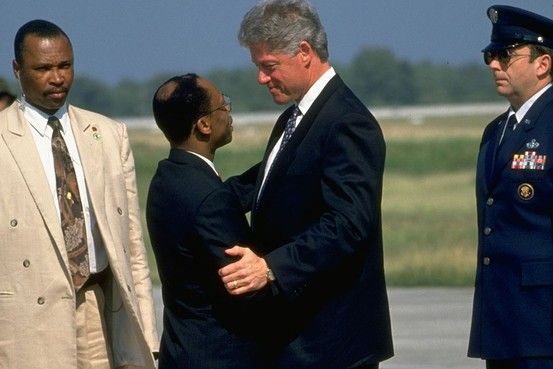 Mary O’Grady looks at how Bill Clinton Spins His Haiti Intervention
Amid a probe of Aristide, the former president offers a new version of events. (emphasis added)

Speaking after his wife addressed the Iowa crowd, Mr. Clinton explained his 1994 Haiti intervention: “The military dictator down there was putting tires around people’s necks and setting them afire, in an affectionate policy called necklacing,” he recalled satirically. “I was told that nobody gave a rip about Haiti.” But “we did it and no shot was fired. Nobody got hurt.”

That’s some tale. But as any Haitian knows, it was Mr. Aristide who championed Haitian “necklacing,” aka “Père Lebrun” after a domestic tire merchant. Governing a democracy with a national assembly was more difficult than he had anticipated and he urged his followers to give Père Lebrun to his opponents, as an Oct. 1993 Congressional Research Service report documented.

On Sept. 29, 1991, the military stepped in and kicked him out. It employed its own paramilitary, which also practiced repression—but guns, not necklacing, were its weapon of choice.

Mr. Aristide fled to Washington, where President George H.W. Bush released Haiti’s international telephone and airline revenues to him as the government-in-exile. There was never any accounting for those funds but they reportedly topped $50 million. Mr. Aristide lived the high life in Georgetown and mounted an aggressive and costly lobbying campaign for U.S. military intervention to restore his presidency.

Once Mr. Clinton put Mr. Aristide back in the palace in Port-au-Prince, his supporters picked up where they had left off. Opponents were hacked with machetes, set on fire and gunned down. Money disappeared.

The Clinton administration did nothing to contain these abuses. Instead, a company called Fusion, run by Democrats—including Joseph P. Kennedy II, Mack McLarty, who had been Clinton White House chief of staff, and Marvin Rosen, a former finance chairman of the Democratic National Committee—went into the long-distance telephone business with Haiti Teleco, the government-owned monopoly.

As long as the spin holds, Hillary will ask, “What difference, at this point, does it make?”

Let’s hope the American public doesn’t put the Clintons back in the White House.

What does the Hillary-Alinksy letter reveal?

President Obama and his family are completing their visit to Brazil, Chile and El Salvador. Mary O’Grady explains Why Obama Went to Brazil
There’s a chance to build a new foreign policy alliance that disdains dictators like Hugo Chávez.

As to the good reason for such a trip, consider the shared geopolitical interests between the U.S. and the biggest democracy in Latin America. Although former President Lula da Silva, also from the Workers’ Party, did almost nothing to deregulate a mostly unfree economy over his eight years in office, he did manage to respect the central bank reforms carried out by his predecessor, President Fernando Henrique Cardoso. As a result, after decades of inflationary chaos caused by central bank financing of government deficits, Brazil has now had vastly improved price stability for more than a decade. Ending the cycle of repeated devaluations is enabling the formation of a substantial middle class, and it is shaping a nation that increasingly wants to be part of the modern, global economy.
…
If Brazil is seeking rapprochement with the U.S., it is a welcome development for the entire hemisphere. As an ally on the fundamentals, like opposition to torture in Cuban jails, Brazil could be part of a long-awaited regional push to denounce human rights abuses. It might also come in handy next year when Venezuela holds presidential elections. Mr. Chávez has said that even if he loses, he won’t step down, and the commander of the army has agreed.

That could make for a situation not unlike what is unfolding in Libya today. If the U.S. and Brazil are singing from the same hymn book, it will help. It’s only too bad the commander in chief who was starting a war didn’t have the good sense to return home after the meeting in Brasilia.

Obama’s trip is in the headlines throughout the hemisphere.

The Perigee Has Landed

Nuclear Energy, Japan and the Implications for Obama’s Visit to Chile

A view from the ‘other’ Chile

COLOMBIA
Colombia says it found Venezuelan weapons on its territory

HAITI
Haiti held a runoff election yesterday; the results are due next week

MEXICO
The government of Mexico backs emigrant workers in suit against U.S. firm

A Free Man Still Looks Over His Shoulder in Mexico

The week’s posts,
In the headlines: ‘my Dear Obama, our son’, French flying over Libya, Obama in Rio
The Consequences of Trade Inaction in Latin America
Chavez rails against the boobs
44 Senate Republicans write Harry Reid on FTAs with Colombia & Panama