A roundup of FARC:

A member of a Colombian terrorist group was sentenced Tuesday to 27 years in prison for his role in a 2003 hostage-taking of three American Defense department contractors.

Diego Alfonso Navarrete Beltrán, 43 years old, was the third leader of the Fuerzas Armadas Revolucionarias Colombianas (FARC) convicted in the hostage taking of Marc D. Gonsalves, Thomas R. Howes and Keith Stansell, employees of a Northrop Grumman Corp.subsidiary. The men, along with fellow American Thomas Janis and Sgt. Luis Alcides Cruz of the Colombian military, were captured when their antidrug surveillance plane went down in FARC-held territory in 2003. Messrs. Gonsalves, Howes and Stansell were rescued in 2008, after 1,967 days in captivity, along with other hostages, including former Colombian presidential candidate Ingrid Betancourt.

Colombia is again the world’s top coca producer. Here’s why that’s a blow to the U.S. (emphasis added),

The coca boom comes at an especially sensitive time for the Colombian government, which is in the final stages of peace negotiations with leftist FARC rebels, who have long profited from the illegal drug trade. Last month the government halted aerial spraying of the crop, citing concerns that the herbicides used may cause cancer. That program had been a pillar of Plan Colombia, under which the United States has provided more than $9 billion to this country since 2000.

Colombian President Juan Manuel Santos, a key U.S. ally, said his administration is ready to launch a massive crop substitution campaign if a deal with the Revolutionary Armed Forces of Colombia, or FARC, is reached and areas under rebel control become safe enough for government workers. The guerrillas and the government have already agreed in principle on a sweeping new development plan for Colombia’s struggling rural areas, with the FARC pledging to help persuade farmers to rip out their coca in favor of lawful crops.

U.S. and Colombian officials say the biggest reason for the current bumper crop is that the FARC, along with other armed groups, has encouraged farmers to plant more coca in anticipation of the peace deal and the new government aid.

The leader of Colombia’s largest armed rebel group, the Farc, has said he ordered the organisation in September to stop buying guns and ammunition.

How convenient: Amid Ceasefire In Colombia, FARC Proposes US Military Funding Go To Peace-Building Fund

“The resources allocated to military aid should be redirected in their entirety to the fund” to end the conflict, according to a statement read by Lucas Carvajal, a FARC peace delegation member. The statement also called upon Colombian President Juan Manual Santos to “redefine the current structure of public expenditure…in particular, the spending on security and defense.”

“In the name of peace, narco-terrorism again takes over Colombia, all the lost effort and the risking of so much blood to disassemble it!”

UPDATED with translation of video
Please scroll down 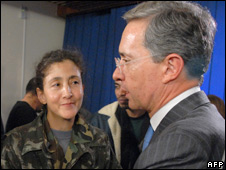 Yesterday I stated that the hostage rescue by Colombia’s military has changed the political landscape in South America. Last Wednesday Investor’s Business Daily looked at some of the actors.

It’s really early to explore the implications, but here are some of the more immediate:

1. Colombia has undermined the FARC to the point of having it on the run, killing its top leaders, and inflirtrating its topmost ranks. At its height, the FARC controlled over 30% of Colombia’s territory and terrorized the entire country. Colombia is about to end its decades-long civil war, and the good guys are winning.

While the really hard work is about to start – i.e., ending the stranglehold of the cocaine trade – the victory opens the possibility that that, too, can be attained.

2. The FARC started as the military wing of the pro-Moscow Colombian Communist Party and has remained aligned with Communists in Latin America, including Hugo Chavez.

(Please don’t come telling me that Chavez is not a Communist. He declared himself a Communist on January 2007, as this laudatory article at the Guardian states,

“Socialism or death – I swear it,” he said last week, and declared himself a communist.)

This is a blow to Communism in Latin America. To use Esteban Lijalad‘s words, “Today Che died”.

3. Appeasement never works, and the only way to defeat terror is through relentless, calculated, strategic, effective force. This carries great implications not only for Colombia and Latin America, but also on the war on terror.

The rescue has vindicated Mr Uribe’s uncompromising position with respect to negotiating with the Farc and justified his refusal to make concessions in order to gain the release of hostages.

4. Hugo Chavez’s dream of heading a Bolivarian empire in Latin America has been dealt a huge blow. The FARC, one of his key allies, is defeated. As Ingrid Betancourt herself said,

“agradezco los esfuerzos de Chavez, pero debe saber que los Colombianos elegimos a Uribe, no a las FARC”.
(my translation:) “I appreciate Chavez’s efforts, but he should learn that uwe Colombians elected Uribe, not the FARC.”

5. Just as the bad guys get together – as Chavez supports the FARC, Hezbollah, and Iran – the good guys also get together for training and technology: The US has funded the Colombian government’s efforts in its war against terror to the tune of $600 million/yr in security and antinarcotics aid (h/t Betsy), and Israel (h/t Atlas) provided training:

The Israeli consultation was focused mainly on intelligence issues, special operations and integration and coordination between different security elements. This was in order to prepare them for a coordinated and productive campaign within a short period of time.

6. However, it can not be emphasized enough that it was the Colombians themselves who actually planned, executed, and succeeded in a months-long operation, and who will continue to do the heavy lifting.

Clarification: To give you an idea of why point #6 is so very important, Simon Romero of the NYT summarizes the situation in one sentence:

The mission would require near perfect execution by a military that only a few years ago could rarely be trusted.

That is a hugely significant development, both in the symbolic sense, and in the strategic implications. It marks a new stage in the history of Latin America.

UPDATE
As to the rumors circulated by Swiss public radio and their unnamed sources, clearly the Swiss should stick to reporting on cuckoo clocks. Daniel casts a jaundiced eye on the Swiss.

UPDATE 2: Translation of Operation Check: Images from Ingrid Betancourt’s rescue
Macker sent this video of the rescue, asking that I translate it:

Translation: Please credit me if you use this translation. Thank you.

Operation Check (as in chess): Images from Ingrid Betancourt’s rescue
13:23:00 [Voice off camera] “…from this side… hold…hold…backlighting…backlighting…”

Video cuts him off.

[Reporter, again off camera, while the tall man’s hands are tied] “…of prisoners at the hands of the Colombian Revolutionary Armed Forces [i.e., the FARC]. the people’s army. We’ll have the chance to talk with the three Americans being held by the Colombian Revolutionary Armed Forces. On politics, we can’t talk about politics. Get closer [to the tall man], get closer.”

13:27:30 [Tall man, getting closer to the camera] “Tell my family, my family, the whole world.” [gets taken away]
[Reporter] “On politics, we can’t broadcast, we can’t have the group of prisoners at the hands of the Colombian Revolutionary Armed Forces, we can’t…”

13:27:45 [Hostage with mustache, approaching reporter] “Yes, excuse me. I only have one thing to say: I have been chained for ten years. I am Lieutenant Malagon, of the glorious Colombian National Army, [voice breaks] kidnapped for many reasons by this guerilla.”

13:28:01 [Reporter] “Words by Lieutenant Malagon. We can’t broadcast them directly, we can’t quote them but we know the suffering.”
[Lt. Malagon] “They should be broadcast, because I have something very important to state….”

13:29:12 [Reporter] “We understand, but the restrictions, the press is restricted, it’s not allowed.”

Once in the helicopter, Betancourt crying, hostages laughing, hugging, thumbs up. Betancourt & other hostage holding each other. Helicopter noise, unintelligible voices.