As a teaching tool Levin used “The Vagina Dance,” a song replete with dance steps and arm movements, and required her entire co-ed class to participate in it – all to the tune of The Hokey Pokey, no less.

No word on whether a penis dance was added for a full Hokey Pokey effect.

ShrinkWrapped on the Stupidification of America

Do We Now Have A “Slick” Barack?

Here it is The HELEN THOMAS INTERVIEW-Part II

Should Jews Apologize to Turkey or Go Back to Poland and Germany?

In CIA’s drone mission, who will protect the CIA?

My friend Rick Moran meets The Finger of God

the Obama administration is struggling to come up with the money:

While Mr. Obama has acknowledged that he would miss the Jan. 22 deadline for closing the prison that he set shortly after taking office, the administration appeared to take a major step forward last week when he directed subordinates to move “as expeditiously as possible” to acquire the Thomson Correctional Center, a nearly vacant maximum-security Illinois prison, and to retrofit it to receive Guantánamo detainees.

But in interviews this week, officials estimated that it could take 8 to 10 months to install new fencing, towers, cameras and other security upgrades before any transfers take place. Such construction cannot begin until the federal government buys the prison from the State of Illinois.

The federal Bureau of Prisons does not have enough money to pay Illinois for the center, which would cost about $150 million. Several weeks ago, the White House approached the House Appropriations Committee and floated the idea of adding about $200 million for the project to the military spending bill for the 2010 fiscal year, according to administration and Congressional officials.

The Dems don’t want it:

But Democratic leaders refused to include the politically charged measure in the legislation. When lawmakers approved the bill on Dec. 19, it contained no financing for Thomson.

However, the issue is national security. In his post, We Interrupt this Socialization of Medicine to Bring You an Abdication of Our National Defense . . . Andy McCarthy explains that twelve detainees were released from Gitmo to – astonishing to believe, but true – Yemen:

Yemen, an al-Qaeda hotbed whose government makes common cause with jihadists (and has a history of allowing them to escape — or of releasing them outright); Afghanistan, which is so ungovernable and rife with jihadism that we’re surging thousands of troops there (troops the jihadists are targeting); and Somaliland, which is not even a country, and which offers an easy entree into Somalia, a failed state and al-Qaeda safe-haven. At least one of the released terrorists, a Somali named Abdullahi Sudi Arale (aka Ismail Mahmoud Muhammad), was released notwithstanding the military’s designation of him as a “high-value detainee” (a label that has been applied only to top-tier terrorist prisoners — and one that fits in this case given Arale’s status as a point of contact between al-Qaeda’s satellites in East Africa and Pakistan).

As if that’s not bad enough,

the Justice Department has taken the lead role in making release determinations — the military command at Gitmo has “zero input” and “zero influence,” in its own words. DOJ is rife with attorneys who represented and advocated for the detainees, and, in particular, Attorney General Holder’s firm, represented numerous Yemeni enemy combatants.

Maybe Holder expects the released detainees to take a job with al-Jazeera. 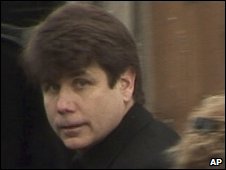 The next vote will decide whether he’s barred permanently from running for office.

Update 5:55PM Blago now disqualified from holding any future office in Illinois. Apparently he’ll be speaking to the press tonight.

By a matching 59 to 0 vote, the Senate also voted to bar Blagojevich for life from holding Illinois political office.

Blago said he can’t wait to prove how innocent he is, Merry Christmas, Happy Holidays, and bye-bye.