The economics don’t add up, but the project serves both governments’ larger interests.

The Chinese government denies it is behind the concession held by HKND. But with more than $3.5 trillion in foreign reserves, it’s the logical candidate to foot the bill. Beijing has been flexing its geopolitical muscles in the Americas for more than a decade, and it hasn’t hesitated to work closely with corrupt dictatorships like those in Ecuador and Venezuela. According to HKND, the Nicaragua canal will require a labor force of 50,000. Many can be expected to be Chinese. The company says the China Railway Construction Corporation is conducting feasibility studies of the project.The HKND concession includes the rights to develop “two ports, a free-trade zone, holiday resorts and an international airport.” Canal or no canal, each is a business opportunity not only for China but also for Mr. Ortega, who is bound to ensure that he gets a piece of the action.

The canal, a project of Dubious Plans and Abundant Unknowns, cannot come about (as I have been saying from the start) without major support from the Chinese government. As O’Grady puts it,

China may still see the ditch as part of a military strategy,

A Nicaragua canal may fit as part of a military strategy along with the South China Sea projects.

The Nicaragua Canal, that project of Dubious Plans and Abundant Unknowns, is back in the news.

It appears that HKND Group by now has feasibility studies, property surveys, an environmental impact review and exploratory drilling, according to the Wall Street Journal, but

Still unclear is whether the canal will be built.

But to make room for the waterway, ports, roads and free-trade zones, the company says it needs 642 square miles. Nicaraguan government officials justify the pending expropriations, which would uproot 27,000 people, saying the canal will transform this impoverished Central American nation by creating 50,000 jobs and doubling the economy.

Though the government has yet to seize a single acre, HKND Group says it will pay market prices for confiscated acreage. However, a 2013 law authorizing the government to expropriate any land needed for the canal says payments will be based on each property’s assessed tax value, figures that are usually much lower.

“Nothing is going on with the canal because there is not yet any money deposited for it,” said Bayardo Arce, the top economic adviser to President Daniel Ortega.

Say again? A project this big, 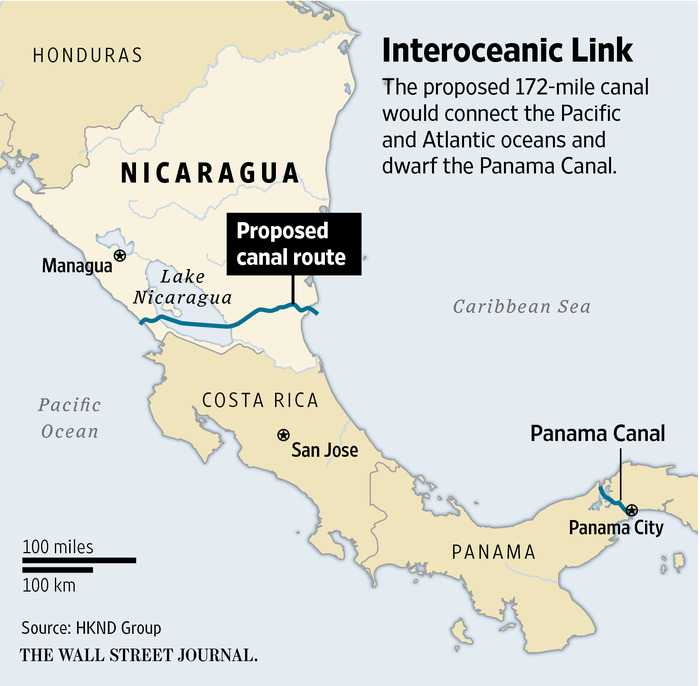 and “there is not yet any money deposited for it“?

And, if that’s not bad enough,

More than one-third of the canal’s route skips dry ground altogether by cutting across Lake Nicaragua, the largest reservoir of drinking water in Central America.

Back in the 1980s, Ortega expropriated more than 1.5 million acres, including properties belonging to opposition leaders. The canal project, even (especially?) if no canal actually is built, may serve Ortega’s purposes after all.

For many years now we who watch Latin American news have been hearing about a Nicaraguan canal to rival the Panama canal.

Indeed, people who know Nicaraguan history have been hearing about it for centuries.

Back in 2010 the Iranians were in the picture,

Costa Rica says that last week Nicaraguan troops entered its territory along the San Juan River – the border between the two nations. Nicaragua had been conducting channel deepening work on the river when the incident occurred.

Sources in Latin America have told Haaretz that the border incident and the military pressure on Costa Rica, a country without an army, are the first step in a plan formulated by Venezuelan President Hugo Chavez and Nicaraguan President Daniel Ortega, with funding and assistance from Iran, to create a substitute for the strategically and economically important Panama Canal.

Well, Hugo died, his heir Nicolas Maduro’s still talking to the birds, the Panama Canal expansion is going on schedule, and the Iranian fervor has cooled off in the midst of its current current annual inflation rate of 105.8 percent.

Nicaragua’s legislators gave their poverty-stricken country one more chance at a dream that has eluded it for nearly 200 years, granting a Hong Kong company the right to build a $40 billion interoceanic canal.

Supporters of the 50-year concession, approved Thursday, hope that it will propel Nicaragua out of its misery by boosting employment and economic growth. But there is also ample suspicion that the project will flounder, as so many others have done since the first government contract for a canal through Nicaragua was awarded in 1825.
…
The project envisions building a canal as long as 286 kilometers (178 miles), depending on which of four possible routes is used, as well as two deep-water ports, two free-trade zones, an oil pipeline, a railroad and an international airport.
…
The law granting the concession to HK Nicaragua Canal Development Investment Co., known as HKND Group, whose sole owner is Wang Jing, a 40-year-old Beijing-based entrepreneur, was introduced last week to Nicaragua’s congress, which is controlled by Mr. Ortega’s ruling Sandinista party.

Take a look at the map, 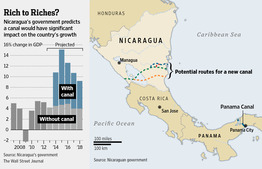 Look at the size of the existing Panama Canal, whose expansion is estimated to cost $5.25 billion dollars and take 8 years, and compare it to the projected Nicaraguan canal. Are we supposed to believe that a new canal, multiple times larger, when

plus two deep-water ports, two free-trade zones, an oil pipeline, a railroad and an international airport, are supposed to cost only $40 billion?

If the Chinese government is not involved, who’s going to cough up that kind of money for that period of time?

Wang Jing’s experience appears to be only in the telecommunications industry. And he’s not even started the feasibility studies?

Mr. Wang registered his canal company in Hong Kong in August. A month later, on Sept. 5, he met President Ortega in Nicaragua. That day, Mr. Wang and the Nicaraguan government signed a memorandum of understanding—which wasn’t announced at the time—authorizing Mr. Wang to promote the financing and participate in the construction of a canal.

And then there’s the collapse of the Chinese stocks, which happens sporadically, since – guess what! – China doesn’t use GAAP (Generally Accepted Accounting Principles).

Bernie Madoff is probably regretting he didn’t think of this first, but Werner Herzog may be casting a lead for a movie now that Klaus Kinski is gone.

Those of us who watched Downton Abbey may recall that Robert Crawley, Earl of Grantham found that

the investment he made in the Canadian Railway has become worthless, he had lost his own and most of Cora’s money, enough to lose Downton.

Don’t be the next Lord Crawley.