The nanny state and the stimulus, together, that is, and we haven’t even getting into the more meddlesome points of Obamacare yet,
Obesity Rating for Every American Must Be Included in Stimulus-Mandated Electronic Health Records, Says HHS (emphasis added)

New federal regulations issued this week stipulate that the electronic health records–that all Americans are supposed to have by 2014 under the terms of the stimulus law that President Barack Obama signed last year–must record not only the traditional measures of height and weight, but also the Body Mass Index: a measure of obesity.

The obesity-rating regulation states that every American’s electronic health record must: “Calculate body mass index. Automatically calculate and display body mass index (BMI) based on a patient’s height and weight.”

And if your doctor doesn’t want to? They have to opt out of Medicare/Medicaid:

The new regulations are one of the first steps towards the government’s goal of universal adoption of electronic health records (EHRs) by 2014, as outlined in the 2009 economic stimulus law. Specifically, the regulations issued on Tuesday by Health and Human Services Secretary Kathleen Sebelius and Dr. David Blumenthal, the National Coordinator for Health Information Technology, define the “meaningful use” of electronic records. Under the stimulus law, health care providers–including doctors and hospitals–must establish “meaningful use” of EHRs by 2014 in order to qualify for federal subsidies. After that, they will be subjected to penalties in the form of diminished Medicare and Medicaid payments for not establishing “meaningful use” of EHRs.

Could someone explain a “NON-meaningful use” of EHRs?

And, wait! As Darlene points out,

Socialism is all about one thing: control. The ultimate control is over our stomachs. This is why Joseph Stalin used food as a weapon, confiscating enough to kill as many as 10 million in the Holodomor. Leftist icon Mao Zedong’s staggeringly incompetent totalitarian regime starved as many as 43 million more. Under the milder (although also economically devastating) socialist dictatorship of Franklin D. Roosevelt, the government began confiscating money from some to pay others not to plant crops. In over two centuries, the most crippling blow ever inflicted on our Constitution by the statist thugs it was written to protect us against was when the 10th Amendment was effectively repealed by FDR’s stooges on the Supreme Court in the Wickard v. Filburn case, which determined that the Commerce Clause enables the federal government to dictate what food you can grow on your own land for your own consumption.

This BMI maneuver is just another instance through which the Obama administration is set on transforming America to its statist, government-controlled “ideal” image.

Change. What a concept.

Economic experts at the Health and Human Services Department.

Economic experts at the Health and Human Services Department concluded in a report issued Thursday that the health care remake will achieve Obama’s aim of expanding health insurance — adding 34 million to the coverage rolls.

But the analysis also found that the law falls short of the president’s twin goal of controlling runaway costs, raising projected spending by about 1 percent over 10 years. That increase could get bigger, since Medicare cuts in the law may be unrealistic and unsustainable, the report warned.
…
In particular, concerns about Medicare could become a major political liability in the midterm elections. The report projected that Medicare cuts could drive about 15 percent of hospitals and other institutional providers into the red, “possibly jeopardizing access” to care for seniors.

One for the “no sh*t Sherlock” file?

I know! I’m sure you’re wondering, as I am, how there can be poetry in a world where the Democrats can underestimate the cost of a byzantine entitlement structure that floods one-sixth of our economy with so many perverse incentives that it should be subject to Megan’s Law. 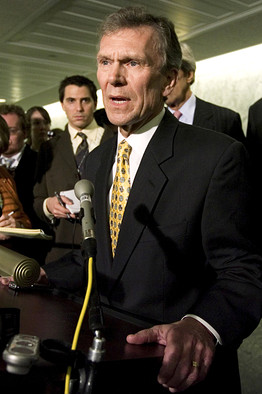 Tom Daschle has withdrawn his name as Health and Human Services secretary, The WSJ also reports that,

The IRS’s probe into EduCap is looking is looking into cash transactions involving Ms. Reynolds, the purchase of a $28 million corporate jet by EduCap, trips to Europe by Ms. Reynolds, and spending on gifts and luxuries, according to details disclosed in documents filed in a court case in Washington, D.C. The documents are exhibits in a Freedom of Information Act lawsuit EduCap is pursuing against the IRS demanding the names of individuals whom the agency has interviewed for its investigation. The IRS is refusing to identify many of its sources, saying they fear legal retaliation by EduCap.

The IRS also is trying to determine why a former EduCap “security officer” made two cash deposits of $170,000 each into personal account of Ms. Reynolds at Riggs Bank in 2003, according to disclosures by the IRS in U.S. District Court. The former employee told the IRS in 2006 that he didn’t realize the money was going into Ms. Reynolds’ personal account, according to an agent’s notes filed with the court.

EduCap describes itself on its Web site as a “non-profit education organization” with a mission of providing affordable college loans to students whose family incomes are too high to qualify for financial aid or federal student loan programs.

The IRS is probing whether EduCap’s spending for such things as the jet amount to an improper personal benefit to its executives under the tax laws governing not-for-profit organizations.

Ms. Killefer, 55 years old, failed to pay employment taxes on household help for a year and a half, the Associated Press reported. In 2005, the AP said, the District of Columbia filed a $946.69 tax lien on her home for failure to pay the unemployment compensation tax. The error was resolved five months later.

It remains to be seen whether the IRS will continue to prosecute Daschle to the full extent of the law, as they do “everyday folk”.

The old Pontiac, while the limo was getting a lube?