Officials Examine Press Bus in Rio That May Have Been Hit by Stray Bullets. Stray bullets may have hit a press bus on one of Rio de Janeiro’s Olympic transportation lines, injuring at least one journalist who was struck by shattering glass, one of the passengers said

If caused by gunfire, the incident would mark the second time since Saturday that stray bullets have struck near journalists visiting Rio for the Olympics, highlighting the city’s ongoing crime problems despite a major effort to improve security.

On Saturday, a bullet pierced the roof of a media tent at Deodoro’s equestrian facility and landed on the floor near journalists, where it was photographed. Security officials believe that bullet came from a nearby slum and had been intended for a police blimp, the Associated Press reported, citing a spokesman for the Rio 2016 organizing committee.

Brazil has some of the strictest fun control laws in the world.

The  text  of the resolution passed at the 199th session of the United Nations Educational, Scientific and Cultural Organization, or UNESCO, does not recognize a Jewish connection to the Western Wall and the Temple Mount and calls Israel an “occupying power.” It was approved with 33 votes in favor, including Brazil’s. There were 17 abstentions. France also reportedly has decided to change its vote.

“In practical terms, it (the resolution) was more a pretext for the Arab world to disseminate hatred against Israel,” read a  statement  from the Brazilian Israelite Confederation, the country’s umbrella Jewish organization.

In other news, Brazil Has Nearly 60,000 Murders, And It May Relax Gun Laws

“Brazil doesn’t have a gun problem. It has a problem of illegal guns in the hands of criminals, especially drug traffickers,” he [Congressman Edson Moreira] says

As mentioned earlier, Historically it is state failure which drives civilian armament and not the other way around

I emigrated from Venezuela—one of the most dangerous countries in the world today. A few years ago, the government came for our guns. We were told we would be safer without them.

Of course, the politicians, the rich and famous, their bodyguards and criminals—they still have their guns. Everyone else lives in fear. Mothers and fathers are powerless to defend their families.

But the drug cartels and gangs—the colectivos—still have all the guns they want. And 90 percent of murders are never solved.

The biggest mistake Venezuelans made was believing that this could never happen. Today, they would do anything for the Second Amendment freedom that we enjoy as Americans. Never ever take it for granted.

I am the National Rifle Association of America. And I am Freedom’s Safest Place.

I linked to this last year (emphasis added), Murdered for their guns, Venezuela’s police are now victims of crime. A gang culture of impunity and stricter gun control has led to off-duty police officers being killed for their weapons, motorbikes and even mobile phones, from The Guardian.

“This particular missile didn’t contain explosives.” Just like a firearm with no bullets in it, only with a heck of a lot more military security codes, programming and national defense information.

Read my post on The inert Hellfire and “common sense”.

In Michoacán state, militias fighting the Knights Templar cartel get smashed by the government. 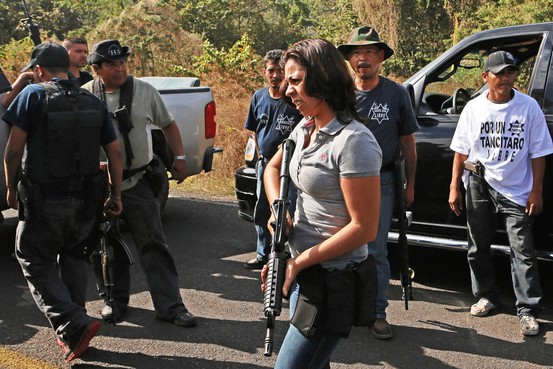 Mexico Confronts Cartel-Fighting Militias
The Mexican military confronted armed vigilantes that had organized to repel a crime cartel from their rural southern state, Michoacán, in deadly clashes on Tuesday.

There were no reports on arrests or confrontations with cartel members on Tuesday, prompting some confusion among Michoacán residents over why the military seemed determined to disarm the militias but not the cartel. Others were concerned over the vulnerability of unarmed and readily identifiable militia members if Knights Templar members seek to retaliate.
…
A spokesman for the vigilantes, Estanislao Beltrán, said during a news conference that Tuesday’s confrontation began when soldiers who had confiscated weapons from the militias in the town of Antúnez were blocked by townspeople.

It was unclear how many people died during the morning clash. Mexican media, citing unofficial accounts by the military, put the number at two, while Mr. Beltrán said four had died.

Interestingly, the attack on the militia coincides with this:

In recent days the vigilante groups appeared to gain the advantage over the cartel. On Sunday, they entered Nueva Italia and encircled Apatzingán, the town of 100,000 where the cartel is based.

Mexico has some of the most restrictive firearms laws in the hemisphere.

An investigation by El Universal has found that between the years 2000 and 2012, the U.S. government had an arrangement with Mexico’s Sinaloa drug cartel that allowed the organization to smuggle billions of dollars of drugs in exchange for information on rival cartels.

Sinaloa, led by Joaquin “El Chapo” Guzman, supplies 80% of the drugs entering the Chicago area and has a presence in cities across the U.S.

There have long been allegations that Guzman, considered to be “the world’s most powerful drug trafficker,” coordinates with American authorities.

But the El Universal investigation is the first to publish court documents that include corroborating testimony from a DEA agent and a Justice Department official.

The written statements were made to the U.S. District Court in Chicago in relation to the arrest of Jesus Vicente Zambada-Niebla, the son of Sinaloa leader Ismael “El Mayo” Zambada and allegedly the Sinaloa cartel’s “logistics coordinator.”

Zambada-Niebla also alleged that Operation Fast and Furious was part of an agreement to finance and arm the cartel in exchange for information used to take down its rivals. (If true, that re-raises the issue regarding what Attorney General Eric Holder knew about the gun-running arrangements.)

Is any of this true?

True? Bullshit? I don’t know. As far as partisan/presidential blame, the narrative goes like this: The agreement (about permitting Sinaloa drugs to get through to the US in exchange for tips on rivals) is struck by Clinton. It “peaks” under Bush, in 2006, through Obama, in 2010, but at that point we seem to still be talking about laying off Sinaolo [sic] drug deliveries. I’m not sure if there is anyone blamed for the “arming the narcogangsters” by this narrative except for Holder and Obama.

Former ATF Special Agent John Dobson made similar claims in his book The Unarmed Truth: My Fight to Blow the Whistle and Expose Fast and Furious. Agent Dobson is the agent who originally blew the whistle on Fast and Furious.

Last November Holder appealed a judge’s ruling allowing the House of Representatives to continue with a contempt case stemming from his refusal to turn over documents related to the Justice Department’s response to the Operation Fast and Furious gunwalking controversy.

Rep. Darrell E. Issa, chair of House Committee on Oversight and Government Reform, is vowing to keep up the heat in the investigation into Operation Fast and Furious

Talking about Gun Control Battle Moves to the States with Rick and Howard Nemerov.