The bus was built in Canada by Prevost,

The feds bought the two coaches for $2.2 million from Hemphill Brothers Coach, based in Tennessee. It installed custom interior upgrades into the Prevost shell, which accounted for about half the cost.

The contract lists the country of origin as Canada and place of manufacture as “outside U.S. – Trade Agreements,” a possible reference to the North American Free Trade Agreement.

Right on time for the Canada-Colombia FTA, too.

Sam Youngman of The Hill calls Obama a road warrior with an anti-Washington message. Really. Take a look,

If Obama brings his populist, anti-Washington anger back to the White House, pulling out the brass knuckles to battle with Congress, Democrats will rally around him.

Sam must have forgotten that by virtue of being POTUS for the past 2.5 years, Obama is Washington.

The question is, did the dog eat the recovery?

Once the bus tour ends, Obama goes to and returns from vacation, and returns to Washington, he’ll be giving “a major speech in early September to unveil new ideas for speeding up job growth“. This carries the sound of approaching thunder: the storm will be most likely a QE3. Obama’s job creation “plan” was the stimulus, and QE2. The plan was huge, unprecedented federal spending – that’s the only plan.

What did that get us? Deficits!

If Obama had any other plan, he would have unveiled it on day one of the Greyhound One tour, and would have stolen the show from the Republicans entering the presidential race.

What he has mentioned so far is stale,

On the second day of Obama’s three-day bus tour of the upper Midwest, the president worked off the blueprint he had used the day before, offering proposals such as extending a payroll tax cut, spending money to repair roads and bridges, and ratifying pending trade agreements.

More not-quite-shovel-ready road repairs, trade agreements that have been blocked by his own party for the past 4 years, and extending a payroll tax cut? Been there, done that. Meanwhile, Obama’s proposed budget was rejected by his own party, and the Democrats are now taking us into the third year in a row without approving a federal budget.

Richard Fernandez looks at the possible results of that gambit,

In all likelihood, the President’s decision to “blame Congress” will mean an increasing polarization in politics on which basis he will be utterly dependent. He cannot now win on a rising economy so his last chance is to invoke the struggle 24×7. It would be an ironic political fate for the man who promised to be the great uniter and world Grand Bargainer. Ultimately people’s fates are bound up with the forces they unleash and not by what they say.

The motorcade rolls on, 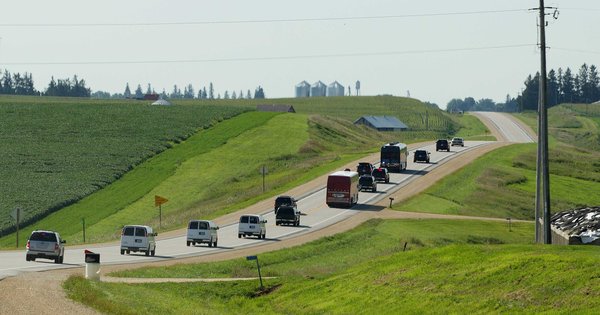 President Obama’s riding through on a large bus that cost over $1 million, but but he’s not sleeping in the bus,

Though the excursion is packaged with humble appeal,

Humble is in the eye of the beholder

it looks like nobody’s sleeping on the bus. The White House has reserved the entire historic Hotel Winneshiek in Decorah, Iowa, and 60 rooms at nearby Luther College, and that’s just one stop on the tour.

Those of you concerned about carbon footprints should take a look at the motorcade,

Yet, the President finds it appropriate to tell auto companies that “You can’t just make money on SUVs and trucks”. So far it looks like you can’t make money on the Chevy Volt. Instead, you should go into the custom-bus business, even if the bus looks more like a police mortuary van than a symbol of hope arriving on your street.

Then there is the issue of unscripted, unexpected encounters,

Obama says the tanking economy is not his fault; the Japan tsunami, the Arab Spring, the Europeans‘ debt crisis, all have added to his streak of bad luck.

Not what one expects for a campaign tour, is it?

By now, even Chris Matthews is saying that the bus tour doesn’t seem to be the right move right now, adding the ultimate insult, “something Pawlenty would have done.”

Obama did say he’ll have a plan to create jobs “when Congress comes back in September.”

But not to worry, Obama continues to “make no apologies for being reasonable” (h/t Instapundit), or unprepared, for that matter, since the unanswered question remains, how does a campaign bus tour create jobs?

In the meantime, Greyhound One rolls right along, at taxpayers’ expense.