and not just any guy, but Bin Laden’s [alleged] former bodyguard,

The prisoner, Abdel Malik Ahmed Abdel Wahab Al Rahabi, was one of the first to arrive at the facility when it opened in January 2002. He was never charged with a crime, but U.S. officials suspected he was one of Osama bin Laden’s body guards, according to leaked prison documents.

El Chapo’s now in the same jail as he dug the tunnel from last year when he escaped. What could possibly go wrong?

BRAZIL
Squeezing the poor: Bus-Fare Protests in Brazil Turn Violent. Seventeen people were arrested in São Paulo as protesters rioted against an 8-cent increase in bus and subway fares.

Rio planned Olympic-scale sewerage project. But citizens say no thanks. Rio’s mayor says that the network is an Olympic legacy. So why have so few people connected to it?

Congress Knew About Hellfire Missile in Cuba, A Year Ago

Dems on parade, In Cuba, Gov. McAuliffe touts his state’s pork, wine — and seaport. Va. leader is outraged to learn pork is trucked from his state to Florida before being shipped to Havana

HONDURAS
Search on for ‘City of the Monkey God’. The President of Honduras, Juan Orlando Hernandez, says scientists plan to explore a jungle site where they believe a mysterious ancient city is hidden.

Ismael paid a man in Kenya $5,000 dollars for a fake passport, a plane ticket to Brazil and introductions to a spidery network of human smugglers that eventually got him to Tapachula and the Hotel Palafox.

MEXICO
No ‘Mission Accomplished’ In Mexico Till Chapo Is Supermaxed

A new UCLA study shows that Guzman’s drug war has taken so many lives that it’s reduced Mexican lifespan expectations by six months, with the worst declines in the states where Guzman operates.

Yet a Facebook commenter said that Mexicans consider the news as a way for Peña Nieto to create a distraction from the poor economy.

PERU
Sex, surgery and HIV: Living in the shadows, the secret struggle of Peru’s transwomen who sell their bodies… and may be dead by 35

The defaulted debt corresponds to $35.9 million in bonds issued by the Puerto Rico Infrastructure Finance Authority and $1.4 million in Public Finance Corp. bonds

The lawsuit filed late Thursday by Assured Guaranty Corp. and Ambac Assurance Corporation claims the government violated the U.S. constitution by diverting tax revenues meant to back certain bonds and used them instead to finance general obligation bonds, which have higher priority. All part of the plan:

A White House spokesman says the administration is in the “final stages” of drafting its latest plan to close the prison holding terrorism detainees at Guantánamo Bay, Cuba.
. . .
Press secretary Josh Earnest says closing Guantánamo remains a priority. Earnest said Wednesday it’s a waste to spend more than $100 million per year on a prison holding only 116 detainees.

Earnest ignores any importance of Guantánamo base as a strategic asset.

I stand by my prediction: Obama will gift Guantánamo base to the Castros before his term is over.

I have been predicting for quite a while that the Obama administration’s next goal regarding its foreign policy on Latin America is to gift the Guantanamo naval base to the Castro’s communist regime.

Rep. Jeff Duncan (R-SC) explains the consequences this will have for America:

Aside from further demonstrating weakness, relinquishing the base at GTMO would be a strategic misstep of epic proportions for the United States. It would have significant national security and military implications. GTMO is the oldest overseas U.S. naval base and only permanent U.S. defense base in the region. Its location enables U.S. forces to maintain full advantages across a wide spectrum of military operations. It plays a critical role in migrant operations assistance missions and is a logistics center for U.S. ships and aircraft, allowing these assets to maintain tactical advantages and freedom of movement in strategic waters in a region with limited U.S. military presence.

If Castro achieved control of GTMO, what would happen? The all-too-obvious answer is that it would allow him to extend an invitation to one of the close allies of Havana, such as the Putin regime in Moscow or the mullahs in Tehran. If any of the actors interested in taking over the lease of GTMO does move into the warm Cuban waters off Florida’s southern coast, this would provide a direct military threat to the U.S. homeland. Consider for a moment the depth of waters and potential ability for nuclear submarines to conduct intelligence operations or worse.

Two years ago, the Russian Defense Minister stated that Russia wants to build military bases in several countries in the Western hemisphere, including Cuba. Press reports of Russian intelligence ships operating in the waters around Cuba, most recently earlier this year on the eve of U.S. talks with Cuba in Havana, prove that Russia is deadly serious about making good on those intentions.

Duncan does not exaggerate; Last year Russian Defense Minister Sergei Shoigu stated that Russia is planning to expand its permanent military presence outside its borders by placing military bases in a number of foreign countries:

Remember what Russia is doing in its own neighborhood for a moment. Vladimir Putin brazenly acted to annex the Crimean Peninsula, ignoring the international outrage, and Ukraine is worried about a “full-scale” Russian invasion. If the U.S. gave way on GTMO, Putin would likely welcome the opportunity to have warm-water lodging for his navy only 90 miles from the United States.

And let’s not forget Iran,

Similarly, Iran continues to test the patience of the international community with its nuclear operations and refusal to cooperate with international inspectors. If things go badly for Iran with any nuclear deal, having a deeper presence in Latin America through Cuba offers Iran options for retributive action should they want it.

On April 30, 2014, the State Department issued its Country Reports on Terrorism 2013, which stated that “Iran’s influence in the Western Hemisphere remained a concern,” but that “due to strong sanctions imposed on the country by the United States and the European Union, Iran has been unable to expand its economic and political ties in Latin America.”[2]

Whether Iran gets what it wants on the nuclear deal (which it does) or not, by lifting sanctions, the U.S. has given Iran every incentive to continue its ongoing economic and political expansion into Latin America. You can expect that making a deal with the Castros on Gitmo is part of their plans.

The administration readily caved on Iran’s nukes because it viewed the matter only as a timely pretense for achieving other cherished aims. These were: (1) preventing an Israeli attack on Iran; (2) transforming the United States into a more forgiving, less imposing power; (3) establishing diplomacy as a great American good in itself; (4) making Iran into a great regional power; and (5), ensuring the legacies of the president and secretary of state as men of vision and peace.

Items 2-5 will play well with that Gitmo gift. 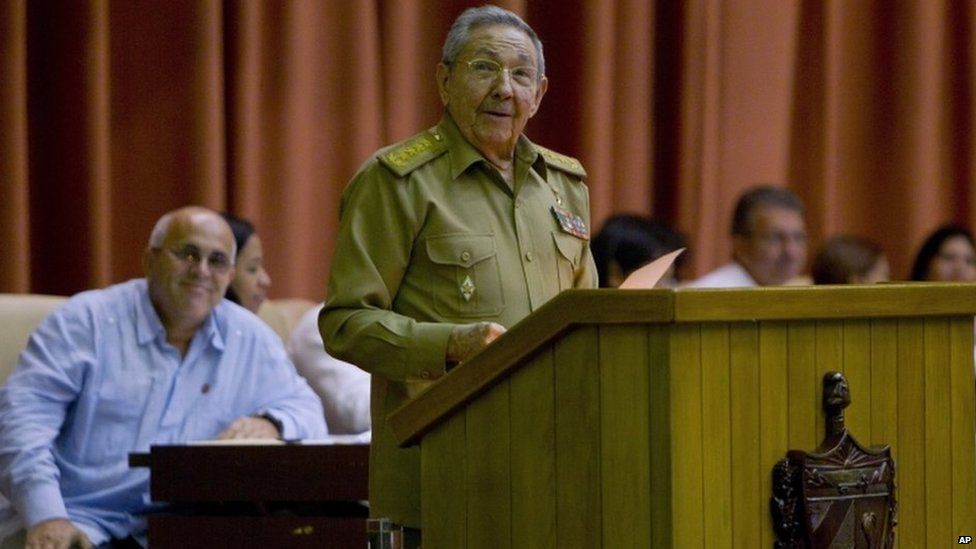 In a speech to the National Assembly, Mr Castro said that, for normal relations to resume, a US embargo on Cuba would have to be lifted.

He also called for the US naval base at Guantanamo Bay to be returned to Cuba.

The die is cast, now we just wait for it to roll. I’m seeing this in the crystal ball: The Obama administration’s objective is to give Guantanamo Base to Cuba. They understand that,

Once played, the Guantanamo card will be gone and Washington’s long-term leverage over Havana will be forever altered.

Obama Does Have a Strategy
Once you see what he is trying to accomplish, it all makes sense.

Now that the murderous Communist regime in Cuba knows that to the Obama administration the word “easement” means “A deal for which the U.S. gets nothing in exchange”, they want more.

The whole enchilada (YES, I KNOW ENCHILADAS ARE MEXICAN. Bear with me here!):

Lest you believe that gifting Gitmo to Russia and all of these concessions are unlikely to come about, keep in mind that Obama is obsessed with his “legacy”. Take it away, Ed!

Only if one believes that these conditions will discourage Obama. He’s desperate for a foreign-policy achievement that will allow him to claim a legacy, and Castro knows it. (So does Iran.) Castro isn’t anywhere near as desperate for normalized relations with the US; he gets plenty of hard currency from the rest of the world, and exchanges it with the near-worthless Cuban peso with which he pays Cubans. Castro wants to strengthen his regime, and humiliating Obama will raise his prestige immeasurably at home.

Gifting Gitmo already has support among some, but as Joshua Treviño commented on Facebook (emphasis added),

We need to establish a new rule of thumb: anyone arguing that major bargaining points should be ceded in exchange for unforced goodwill does not understand basic power dynamics and should be ignored in policymaking henceforth. The Cuban regime isn’t going to be any more grateful or well-disposed toward us after occupying Guantanamo than they are now. They’ll just feel, with some justification, like they’ve won — and moreover won cheaply. What good that does us, well, ask the Israelis about the goodwill garnered after leaving Lebanon and Gaza.

As for the hand-waving dismissal of the modern importance of “conventional hemispheric defense,” that is the sort of thing one writes when one’s historical horizons are confined to an exceedingly small slice of history.

The small slice of history, in this case, “is all about the O.”