Gates of Vienna translates an article from Dutch newspaper De Telegraaf on the Dutch government’s financing of the World Trade Center ground zero mosque to the tune of a million US dollars:

“Netherlands subsidizes Ground Zero mosque”
The Party for Freedom has filed parliamentary questions in response to an article on the Dutch website “text2|Dagelijkse Standaard}”in which it is reported[1] that the Netherlands co-finances the construction of a mosque a stone’s throw from Ground Zero in New York City with a million U.S. dollars of Dutch taxpayers’ money.

The website of the Dutch Ministry of Foreign Affairs says that a subsidy of $ 1,000,000 was awarded to the organization American Society for Muslim Advancement (ASMA). That organization is, in cooperation with the Islamic organization Cordoba Initiative, responsible for the hundred million U.S. dollar cost of the Islamic Center Mosque, which will be built near Ground Zero.

The PVV demands clarification[2] and calls the already-approved plans for the building of a mosque right next to Ground Zero absurd and an insult to the thousands of relatives of the victims who fell on September 11, 2001.

The party wants the subsidy to ASMA to be immediately withdrawn.

UPDATE (6:00 AM ET)
Dutch Omroep Brabant now reports that police say no bomb has been found. A man was arrested, but he it’s likely he’s an insane loser with too much time on his hands and not a terrorist. Good news, if true of course.

Having said that, I do hope that this man will suffer the consequences of pulling such a “prank.” The entire train station was evacuated, people couldn’t get to their work, all because of one attention craving idiot. End Update

In other news, Geert Wilders is on trial. Pat Condell comments,

Gates of Vienna and Diana West have more on Geert Wilders. Go read every word. Geert Wilders was denied entry to the UK by the Home Office.

The Dutch ambassador was also at Heathrow to make clear his government’s opposition to the ban on Mr Wilders entering the UK.

The Home Office said there was a blanket ban on Mr Wilders entering the UK under EU laws enabling member states to exclude someone whose presence could threaten public security.

Is that so? The Daily Mail lists a few of the people the Home Office’s let in (scroll down to the end of the article).

Go to my prior post to view Fitna, the movie. Communists have never liked Lech Walesa, and Chavez has self-declared himself to be a Communist.

My latest post is up at Real Clear World, Hugo Chavez Bans Lech Walesa. I also talked about this in this morning’s podcast.

Walesa was scheduled to meet with Venezuela’s opposition on Thursday, the same day as Geert Wilders was supposed to screen Fitna to the British Parliament.

In both instances, we see governmental entities denying the right of information.

For the first time in its history, Britain has denied entry to an elected official of the EU Parliament:

Geert Wilders was scheduled to screen his movie Fitna at the House of Lords on Thursday.

This is what he was going to screen: 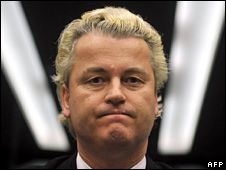 Melanie Phillips writes about what happened next:

This meeting had been postponed after Lord Ahmed had previously threatened the House of Lords authorities that he would bring a force of 10,000 Muslims to lay siege to the Lords if Wilders was allowed to speak. To their credit, the Lords authorities had stood firm and said extra police would be drafted in to meet this threat and the Wilders meeting should go ahead.

But now the government has announced that it is banning Wilders from the country.

So let’s get this straight. The British government allows people to march through British streets screaming support for Hamas, it allows Hizb ut Tahrir to recruit on campus for the jihad against Britain and the west, it takes no action against a Muslim peer who threatens mass intimidation of Parliament, but it bans from the country a member of parliament of a European democracy who wishes to address the British Parliament on the threat to life and liberty in the west from religious fascism.

It is he, not them, who is considered a ‘serious threat to one of the fundamental interests of society’. Why? Because the result of this stand for life and liberty against those who would destroy them might be an attack by violent thugs. The response is not to face down such a threat of violence but to capitulate to it instead.

It was the same reasoning that led the police on those pro-Hamas marches to confiscate the Israeli flag, on the grounds that it would provoke violence, while those screaming support for genocide and incitement against the Jews were allowed to do so. The reasoning was that the Israeli flag might provoke thuggery while the genocidal incitement would not. So those actually promoting aggression were allowed to do so while those who threatened no-one at all were repressed. And now a Dutch politician who doesn’t threaten anyone is banned for telling unpalatable truths about those who do; while those who threaten life and liberty find that the more they do so, the more the British government will do exactly what they want, in the interests of ‘community harmony’.

Worst yet, I don’t expect that the British MPs will rise in protest against this banning order. One of my podcast guests once said that the Brits will always stand for freedom.

This is how democracy dies.

Prior post on Wilders here. Gates of Vienna has been on top of the story from the start. More links at Memeorandum.