Living up to its reputation as possibly the world’s worst-managed economy, the Venezuela government is appealing the US$1.6billion settlement against Exxon by the World Bank’s International Centre for Settlement of Investment Disputes, or ICSID.

Just to put things in perspective,

Exxon had originally wanted $20 billion out of the deal; arbitrators awarded it just $1.6 billion, $600 million of which had already been paid.

The country must honor ICSID rulings to avoid default of sovereign bonds; by having the ICSID provisionally stay the enforcement of the award, Venezuela buys time.

One of two things is going on here. Either the super-fancy and well-worth-top-dollar New York Law Firm representing Venezuela at ICSID, Curtis Mallet-Prevost, has persuaded Ramírez they can get an even better settlement on appeal or the government is now so strapped for cash they’re willing to try any delaying tactic to avoid having to pay up right away.

I don’t know which one it is.

I don’t either, and considering how Nicolas Maduro opened his campaign by saying he talked to Chavez, who is now a bird , maybe he (and his cohorts) went by Chavez’s 2012 promise that Venezuela will not recognize World Bank ruling in the Exxon case.

All you can be sure of is that law firm Curtis Mallet-Prevost will make money out of this, and, as I said last month, that Venezuela has no intention to pay Exxon.

Back in 2005, then-dictator Hugo Chavez started to expropriate assets in Venezuela’s energy, mining and telecommunications industries under the pretext of development and sovereignty.

Energy companies were given until late-2007 to accept proposed contract and compensation terms from Chavez’s government or risk having their assets seized.

Exxon and ConocoPhillips rejected the terms, and Exxon took Venezuela to the World Bank’s International Center for Settlement of Investment Disputes, or ICSID. The ICSID ruled for Exxon, which Chavez promptly, and predictably, rejected. At the time there were 20 other cases against Venezuela at the World Bank’s tribunal, all triggered by the wave of state takeovers.

In a similar complaint, the ICSID ruled Sept. 23 that Venezuela must pay $740 million to Spokane, Washington-based Gold Reserve Inc. (GRZ) for taking its Brisas gold and copper project in 2008. Gold Reserve said on July 23 that it was seeking $2.1 billion for the nationalization.

About 28 cases filed by mining and oil companies remain unresolved at the ICSID, including those filed by Phillips 66 and Highbury International AVV.

Venezuela calls it “a favorable end for the republic,” (h/t Caracas Chronicles)

Which tells you Venezuela has no intention to pay Exxon. The thing is, the country must honor ICSID rulings to avoid default of sovereign bonds. The only certain outcome in the short term is that a lot of lawyers are going to make a lot of money.

Iran in Mexico and the Caribbean: Building a Strategic Trampoline towards the US

PANAMA
On Extraditions and Colombian-Panamanian Ties

VENEZUELA
Venezuela will not recognize World Bank ruling in Exxon case
Venezuelan President Hugo Chavez said on Sunday that his country would not recognize any ruling by a World Bank tribunal in a multibillion-dollar arbitration case with Exxon Mobil Corp.

The week’s posts,
Ahmadinejad is in Venezuela
Jakadrien Turner: Deported Texas Teen Returns to U.S. …from Colombia
The Grand Warlock predicts O will lose
Mexican cartels and the border traffic
Another day, another rumor about Fidel’s death The WSJournal has the understatement of the week,
Venezuela Seen Getting Off ‘Lightly’ In $908 Million Exxon Payment

The payout is substantially lower than the $7 billion that Exxon was seeking in restitution and is likely to be a boon for Venezuela’s defiant leftist government, which in recent years has embarked on a widespread nationalization campaign to centralize control over key economic sectors.

Sure is – it’s less than 13 cents on the dollar. Exxon gets robbed.

If you have any illusions that the Chávez regime will put any of this to good use, check out Venezuela News and Views (my translation)

Will we be rejoicing that Venezuela will pay less for Hugo’s villainies? No way! That’s just more money they’ll steal, or spread around to buy votes (after collecting the sufficient commission to buy and share a white line).

Makes you wonder what was in it for the International Chamber of Commerce (ICC) arbitrators, doesn’t it? 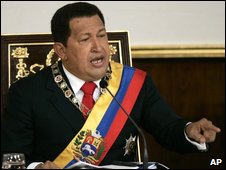