says this report at The XX Committee:

It’s long been known that Wikileaks, by their own admission, counseled Ed Snowden in June 2013 to leave Hong Kong and head to Moscow. Contrary to the countless lies propagated by Snowden Operation activists, Snowden’s arrival in Russia was his choice; it had nothing to do with  canceled passports in Washington, DC.

An important gap has been filled this week by Julian Assange, who admittedthat Snowden going to Moscow was his idea. Ed wanted to head to Latin America, Julian asserted, especially Ecuador, whose London embassy Assange has been hiding out in for years on the lam from rape changes in Sweden. As Assange explained, “He preferred Latin America, but my advice was that he should take asylum in Russia despite the negative PR consequences, because my assessment is that he had a significant risk he could be kidnapped from Latin America on CIA orders. Kidnapped or possibly killed.”

Only in Russia would Ed be safe, Julian counseled, because there he would be protected by Vladimir Putin and his secret services, notably the FSB. One might think that seeking the shelter of the FSB — one of the world’s nastiest secret police forces that spies on millions without warrant and murders opponents freely — might be an odd choice for a “privacy organization.” But Wikileaks is no ordinary NGO.

Why Assange knew Russia would take in Snowden — it could be a big political hassle for Moscow — is a key question that any counterintelligence officer would want answered. Was Julian speaking on behalf of the FSB or did he just “know” Ed could obtain the sanctuary plus protection he sought?

Just as telling is the recent report on Assange’s activities in Ecuador’s London embassy, where it turns out Ecuadorian intelligence has been keeping tabs on him.

While you’re at it, you may be interested in Edward Lucas’s The Snowden Operation: Inside the West’s Greatest Intelligence Disaster (Kindle Single), ($0.99)

“The Snowden Operation” highlights the inconsistencies and puzzles in the account of events given by the “Snowdenistas”. It explains how Russia could have sponsored Snowden’s data heist — the greatest disaster ever to hit Western intelligence, and one whose effects have neatly suited Vladimir Putin’s Russia.

Looks like those asylum offers from Venezuela, Bolivia, Nicaragua and Ecuador came to naught, and Brazil turned him down, so now the NSA leaker is pleading with Obama to cut him a deal

Letting him return to the U.S. to make his case would be “the best resolution for the federal government and the public broadly,” the former National Security Agency employee told CeBIT technology conference in Germany last week. “We don’t want to be the kind of government where people who reveal serious wrongdoing have to seek shelter in other countries to seek any kind of justice.”

What do you mean “we,” Comrade Snowden? “We” didn’t flee to Russia.

Edward Jay Epstein writes on Revisiting Snowden’s Hong Kong Getaway
A year after the intelligence thief landed in Moscow, many questions remain about how he ended up in Putin’s hands.

While important details about Edward Snowden’s activities in Hong Kong remain shrouded in secrecy, the conventional portrait of his stay there and in Russia as one of improvisation and serendipity is at odds with the precision of his well-planned thefts.

Until March 15, 2013, Mr. Snowden worked at the NSA base in Honolulu for Dell, the outside contractor which supplied technicians to work on the NSA’s backup system. From this vantage point, he had access to the NSA Net, from which he pilfered most of the documents he later gave to journalists including the ones about NSA domestic operations that have preoccupied the world’s media.

But he quit Dell and moved to Booz Allen Hamilton, the outside contractor that ran the computer systems in the NSA’s Threat Operations Center. Here he could get access to the crown jewels, the lists of computers in four adversary nations—Russia, China, North Korea and Iran—that the agency had penetrated. He later told the South China Morning Post that his whole reason for making the job switch was to get “access to lists of machines all over the world the NSA hacked.”

He carried out that theft, which included stealing passwords that gave him access to secret files, with great precision. There is no reason to assume that his getaway was any less deliberately planned.

I’ve also read Edward Lucas’s The Snowden Operation: Inside the West’s Greatest Intelligence Disaster. Lucas makes a convincing case that Snowden had to have help inside Booz Allen and/or the NSA. Who are those people?

Princeton University professor Sean Wilentz, contributing editor of The New Republic, asks, Would You Feel Differently About Snowden, Greenwald, and Assange If You Knew What They Really Thought?

The payoff of the Snowden affair for Putin and the Russians thus far has been substantial. Just as the Kremlin’s human rights reputation, already woeful under Putin, has spiraled downward, it is able to swoop in to rescue an American political outlaw, supposedly persecuted by the Obama administration. The dissident journalist Masha Gessen has observed, “The Russian propaganda machine has not gotten this much mileage out of a U.S. citizen since Angela Davis’s murder trial in 1971.” Not a mental asylum, but political asylum: 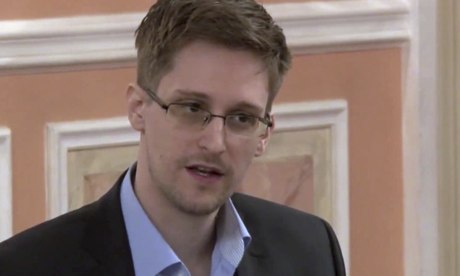 The facts so far: Snowden has not submitted an official request for asylum. A Brazilian government spokesman said that without a formal request, asylum will not be considered.

And Silvio Canto and I discussed the Snowden case in last night’s podcast. 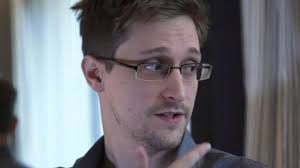 The Russian military recently dispatched a guided-missile warship to Cuba as part of what U.S. officials say are growing military, intelligence and economic ties between Moscow and Havana.

And after that, it’s heading to Venezuela, Nicaragua, and the Cape Verde Islands off eastern Africa.