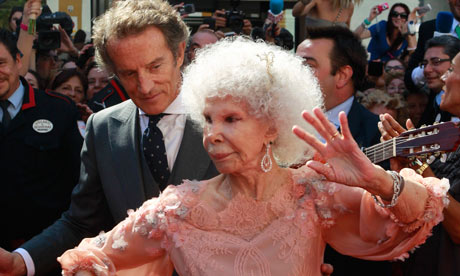 She’s been widowed twice. I fear for him.

Spain’s Duchess of Alba, one of the world’s richest women, is remarrying at age 85. The Will of the Duchess of Alba: All for Love and Money. All, except good judgement, at least when it comes to plastic surgery:

Maybe she’ll buy herself some eyebrows for the wedding.

Todd wrote: “If I were going to marry a babboon, I’d pick a much younger one.”


—————————-
National debt has increased $4 trillion under Obama: Currently the National Debt stands at roughly 97% of Gross Domestic Product. Does anyone want to pretend that the ratio will be the same when we’re talking about $25 trillion in debt?

How about an outline?

The last time I went to Ikea Bill Clinton was President; Charles Martin reminded me why: Dante’s IKEA.

What’s next for Moammar Gadhafi?
Nobody seems to know where the embattled Libyan leader is hiding, or where he’s headed. Here, 5 predictions.

I very much doubt that Muammar will be welcome in Caracas until Hugo’s moved the gold and is not worried about sanctions.

Which brings me to the next item,

How to get $12 billion of gold to Venezuela

It’s not much of a precedent, but it’s the only precedent we’ve got; my gut feeling is that Venezuela would be do well to get away with paying 3.3% of the total value of the gold in total expenses. Given that the gold is worth some $12.3 billion, the cost of Chávez’s gesture politics might reasonably be put at $400 million or so.

It seems to me that Chávez has four main choices here. He can go the FT’s route, and just fly the gold to Caracas while insuring each shipment for its market value. He can go the Spanish route, and try to transport the gold himself, perhaps making use of the Venezuelan navy. He could attempt the mother of all repo transactions. Or he could get clever.

In the first instance, the main cost would be paid by Venezuela to a big insurance company. I have no idea how many insurers there are in the world who would be willing to take on this job, but it can’t be very many, and it might well be zero. If Venezuela wanted just one five-ton shipment flown to Caracas in conditions of great secrecy, that would be one thing. But Chávez’s intentions have been well telegraphed at this point, making secrecy all but impossible. And even if the insurer got the first shipment through intact, there would be another, and another, and another — each one surely the target of criminally-inclined elements both inside and outside the Venezuelan government. Gold is the perfect heist: anonymous, untraceable, hugely valuable. Successfully intercepting just one of the shipments would yield a haul of more than $300 million, making it one of the greatest robberies of all time. And you’d have 39 chances to repeat the feat.

Would any insurer voluntarily hang a “come get me” sign around its neck like that? They’d have to be very well paid to do so. So maybe Chávez intends to take matters into his own hands, and just sail the booty back to Venezuela on one of his own naval ships. Again, the theft risk is obvious — seamen can be greedy too — and this time there would be no insurance. Chávez is pretty crazy, but I don’t think he’d risk $12 billion that way.