French media reported on Friday that Mr. [Dominique] Straus-Kahn, 63, the former head of the International Monetary Fund, would pay $6 million to the housekeeper, Nafissatou Diallo, who accused him of attacking her at a Midtown Manhattan hotel.

Mr. Strauss-Kahn’s lawyer, William W. Taylor III, said in a telephone interview on Friday morning that the French reports were “completely false” and that the $6 million figure “is off by orders of magnitude,” but he would not elaborate and details of the agreement could not immediately be determined. One of the people with knowledge of the matter had cautioned on Thursday that no settlement had yet been signed.

The only lesson so far is that the priapic are likely to get sued. 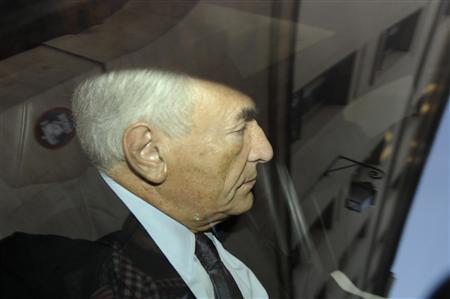 Dominique Strauss-Khan is the gift that keeps on giving, and this time he’s giving bail,
France Probes Ex-IMF Chief for Sex-Ring Link

The magistrates on Monday ordered Mr. Strauss-Kahn to refrain from communicating with plaintiffs as well as with anyone else being prosecuted in the investigation, prosecutors from the northern French city of Lille said in a statement. Mr. Strauss-Kahn, who wasn’t detained or arrested, was also ordered to pay a €100,000 bail ($133,500).

A lawyer for Mr. Strauss-Kahn said that his client “strongly and firmly” rejected the preliminary charges of “aggravated pimping.”

Prostitution is legal in France, but pimping isn’t. To indict him, prosecutors would have to prove that he played an organizational role in the alleged prostitution ring.
…
Investigators had considered investigating Mr. Strauss-Kahn for allegedly illegally benefiting from prostitutes paid through corporate accounts. At least one company has filed a complaint to prosecutors that corporate funds had been diverted for that purpose by the alleged prostitution ring, the people familiar with the matter said.

But on Monday, the Lille magistrates opted not to probe that allegation, the people familiar with the probe said.

Through lawyers, Mr. Strauss-Kahn has said that he had no knowledge that company funds may have been misappropriated by the alleged ring.

I wouldn’t know if he did, but you can bet he’s p****d off someone who wants him out of the French political scene.

Related,
Depardieu likes Sarkozy and Castro but not Strauss-Kahn

Imagine, dear readers, that you are in the airline industry, and your most notorious passenger is, shall we say, lacking in self-restraint. He is also immensely influential, and you can not, by any stretch of the imagination, deny him the service available to any other person willing to pay for transport.

What to do, then?

The claim was reported Thursday by Le Parisien newspaper, which also says lawyers for the former IMF chief’s alleged victim, Nafissatou Diallo, are soliciting testimony from female flight attendants at the national carrier, who may have been subjected to inappropriate behavior by the Frenchman.

The lawyers already received two accounts from disgruntled staff, along with an anonymous letter detailing the Air France male-only order, the report said.

How out-of-control are we talking about?

“Air France has a few hundred complaints from clients, employees, crew members who met the man suspected of having abused your client Madame Diallo,” the letter alleged, adding, “it was decided by Air France that ‘only male employees should be deployed in the first class cabin when this client [Strauss-Kahn] was traveling.’”

Where is Tina Brown when he needs her?

UPDATE,
Linked by Dustbury. Thanks!

Strauss-Kahn Case Seen as in Jeopardy

The sexual assault case against Dominique Strauss-Kahn is on the verge of collapse as investigators have uncovered major holes in the credibility of the housekeeper who charged that he attacked her in his Manhattan hotel suite in May, according to two well-placed law enforcement officials.

Although forensic tests found unambiguous evidence of a sexual encounter between Mr. Strauss-Kahn, a French politician, and the woman, prosecutors do not believe much of what the accuser has told them about the circumstances or about herself.

Since her initial allegation on May 14, the accuser has repeatedly lied, one of the law enforcement officials said.

Senior prosecutors met with lawyers for Mr. Strauss-Kahn on Thursday and provided details about their findings, and the parties are discussing whether to dismiss the felony charges. Among the discoveries, one of the officials said, are issues involving the asylum application of the 32-year-old housekeeper, who is Guinean, and possible links to criminal activities, including drug dealing and money laundering.

Apparently the woman lied on her asylum application about genital mutilation.

It’s worth pointing out that the prosecutor’s investigators are the ones who found this information.

Manhattan prosecutors have agreed to end the house arrest of former International Monetary Fund leader Dominique Strauss-Kahn following new revelations about a hotel maid who accused him of sexual assault, a person familiar with the matter said Friday.

Mr. Strauss-Kahn is due in court Friday morning, when prosecutors are expected to also agree to end electronic monitoring. They will keep his passport as part of the change in bail terms, the person said.

The developments come as both prosecutors and his defense team prepared to raise questions about the credibility of Mr. Strauss-Kahn’s accuser, people close to the case said. Problems with the prosecution’s main witness are expected to be made public at the hearing before State Supreme Court Justice Michael Obus.

“The immediate future of the case remained unclear on Friday morning.” Indeed. 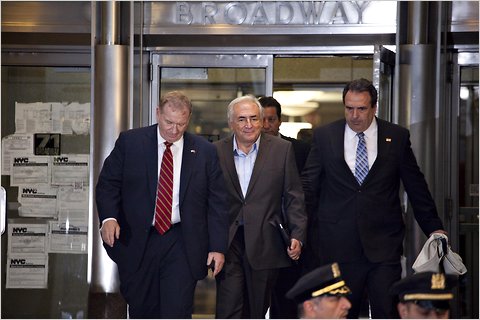