In a display of mind-boggling incompetence (at best), the United States government shipped a Hellfire missile via commercial carrier, and the missile ended up in Cuba, maybe, because they’re not sure of exactly where it is right now (emphasis added)

The missile was sent from Orlando International Airport in early 2014 to be used in a North Atlantic Treaty Organization military exercise, said the people familiar with the case. As with other sensitive military gear, the shipping crate was clearly marked as containing material subject to rigorous export controls, and that shipping information would have made clear to anyone handling it that it wasn’t regular cargo, these people said.

The missile was sent by its manufacturer, Lockheed Martin Corp., after the company got permission from the State Department, which oversees the sharing of sensitive military technology with allies.

A Lockheed Martin spokeswoman declined to comment on the matter, referring queries to U.S. government officials.

The people familiar with the case said the missile was sent to Spain and used in the military exercise. But for reasons that are still unclear, after it was packed up, it began a roundabout trip through Europe, was loaded onto a truck and eventually sent to Germany.

The missile was packaged in Rota, Spain, a U.S. official said, where it was put into the truck belonging to another freight-shipping firm, known by officials who track such cargo as a “freight forwarder.” That trucking company released the missile to yet another shipping firm that was supposed to put the missile on a flight originating in Madrid. That flight was headed to Frankfurt, Germany, before it was to be placed on another flight bound for Florida. 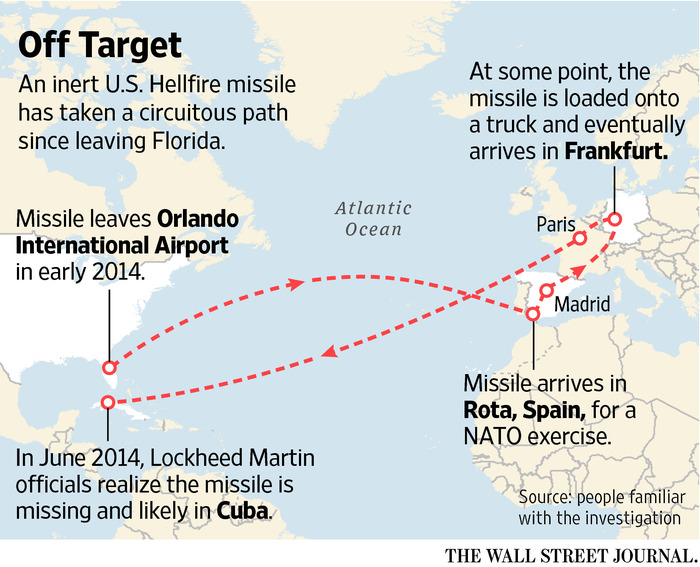 At some point, officials loading the first flight realized the missile it expected to be loading onto the aircraft wasn’t among the cargo, the government official said. After tracing the cargo, officials realized that the missile had been loaded onto a truck operated by Air France, which took the missile to Charles de Gaulle Airport in Paris. There, it was loaded onto a “mixed pallet” of cargo and placed on an Air France flight. By the time the freight-forwarding firm in Madrid tracked down the missile, it was on the Air France flight, headed to Havana.Attempts to reach Air France were unsuccessful.

When the plane landed in Havana, a local official spotted the labeling on the shipping crate and seized it, people familiar with the case said. Around June 2014, Lockheed Martin officials realized the missile was missing, was likely in Cuba, and notified the State Department, said those familiar with the matter.

“Was likely in Cuba.” Think about that for a moment. Send them a Tile!

I’ll leave it to the military analysts to clarify the importance and magnitude of such security breach, but, hey! the Wall Street Journal assures us the missile is “inert,” since “This particular missile didn’t contain explosives.”

Parting question: Just how many Hellfires are there, and where are they?

UPDATE – FOLLOW-UP POST:
Members of Congress knew about the #Hellfire sent to Cuba

Negligence or Malpractice: U.S. Hellfire Missile Ends Up in Cuba

If the U.S. knew about Castro having the missing Hellfire missile since June 2014 — why didn’t it make its return a condition for the normalization of relations, which it announced in December 2014?

Moreover, if Castro won’t return this missile, the Obama Administration didn’t know how it got to Cuba and U.S. intelligence agencies are concerned that the technology being shared with other rogue actors — why did it proceed to remove Cuba from state-sponsors of terrorism list in May 2015?

Inert US Hellfire Missile Ends Up in Cuba

From a legal perspective, and I’d need a lot more facts to confirm, there appear to be multiple violations of the Arms Export Control Act, as well as other laws. And since the Obama Administration has been reforming the export control regulatory system, Congress may want to probe whether recent changes to the licensing system created the conditions, or a lax enforcement environment, that resulted in one of the most advance U.S. missile system ending up in the hands of a rogue regime.

The timing of #Hellfiregate, and the loss of US tech, alone, should drive #Congress to act https://t.co/Hpa2rE1mwZ https://t.co/GsSvJWrtdc

U.S. Missile Mysteriously Turns Up in Cuba and No One Knows How It Got There

How Did an American Hellfire Missile End Up in Cuba?

Linked to by Instapundit‘s Ed Driscoll. Thank you!

Linked to by Granite Grok. Thank you!

Linked to by Proof Positive. Thank you!

Matt Sanchez writes, Future Weapons Development Could Help Stimulate Ailing Economy
Weapons development funds weren’t a part of the $787 billion stimulus package the president signed this week, but some say boosting defense spending and innovation could create jobs and help the ailing economy bounce back. And kick butt while at it, too:

Defense officials planned the modernization of the military during the money-flush years of the Bush administration. Among the projects that they say would boost the nation’s defense capabilities — and conceivably stimulate the economy through the jobs created to build them — are:

— The Unmanned Ground Vehicle (UGV), an all-terrain, multi-purpose robot platform that is already used by Explosives Ordinance Disposal units to handle IEDs. The Army has bigger plans for the durable little robots — if more can be built.

— Micro Air Vehicles (MAVs), remote-controlled “robo-bugs” that the Air Force says could be deployed for a variety of purposes, including close reconnaissance. These small, sophisticated devices — as little as six inches long — can achieve a variety of disguises through “collapsible wings” and “sliding skins.”

— More air drones, which work around the clock and can sense human targets through voice and face-recognition. They can quickly send back real-time footage and aggressively attack their targets.

— Quick Kill, an active protective system designed to destroy enemy weapons and literally deflect incoming projectiles, like a rocket propelled grenade. This high-tech “hit avoidance” shield may crack under budgetary constraints, a concern for Raytheon, the 72,000-employee aerospace and defense company in Waltham, Mass., that produces it.