Dr. Darsi Ferrer has been found dead in West Palm Beach, cause unknown. 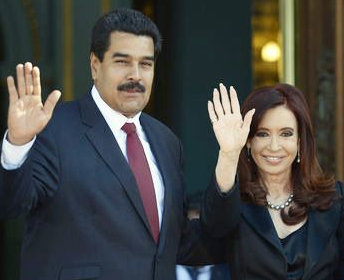 Puerto Ricans’ opinions don’t matter to the tinpot Venezuelan dictator or to the Evita-wannabe, because they need a distraction from driving their own countries to ruin:
Crises Squeeze Two Latin Leaders
The leaders of Argentina and Venezuela were set to attend a conference in Cuba to debate Puerto Rican independence on Tuesday, as their countries faced their most acute economic crises in a decade.

On the streets of Argentina and Venezuela, many asked what their leaders were doing in Cuba when they were struggling with Latin America’s highest rates of inflation and the palpable fear that things could worsen when private investment is veering toward a recovering American economy.

independence for Puerto Rico, which was handed over by Spain after the Spanish-American war, has never gotten much traction. In a 2012 referendum, 61% voted for statehood and only 5% for independence.

Puerto Rico’s independence party has such low turnout that they needed to re-register after general elections.

Not that democracy matters to anyone at the upcoming CELAC

Apparently, the first objective of that organization, as declared, is: “To reaffirm that the preservation of democracy and democratic values, the validity of the institutions and the Rule of Law, a commitment to the respect for, and the validity of, all human rights for all, are the essential objectives of our countries.”

What do these people understand democracy to be? Cuba, like the other countries hatched by the now-extinct Soviet Union, is a one-party dictatorship older than half a century where no individual freedoms exist and no human rights are respected. While the CELAC is being held, the political police harasses and bashes the Ladies in White and the opposition democrats who dare to protest. Is anyone unaware of this?

Cuban dissidents are holding their own forum:

Cuban dissidents and activists plan to hold a forum on democracy in Havana on Jan. 28, parallel to the Summit of the Community of Latin American and Caribbean States, or CELAC, opposition sources told Efe on Saturday.

Organized by the Center for the Opening and Development of Latin America, or CADAL, and the dissident group Arco Progresista, the forum hopes to bring together members of the opposition like Guillermo Fariñas and Jose Daniel Ferrer, Ladies in White leader Berta Soler, blogger Yoani Sanchez and activist Antonio Rodiles, among other representatives of civil society on the island.

Elsa Morejón, whose husband Dr. José Daniel Ferrer, leader of the Patriotic Union of Cuba (UNPACU) was arrested after meeting with the ambassadors of Spain and the Netherlands this week and transported away from Havana for the duration of the summit, tweeted,

The only country in the Americas without free elections or multi-party [system] in 56 years, will host the #CELACSummit. Unbelievable.

But look at the bright side: The more Maduro, Cristina, and their ilk cackle about Puerto Rico, the fewer the Puerto Ricans who’ll side with them.

UPDATE:
My tweet,
#CELACSummit As if there isn’t enough poop in #PuertoRico, @NicolasMaduro & @CFKArgentina want to bring theirs.

Falklands warning
The Government would be well advised to pay heed to the distant sound of sabre-rattling in the South Atlantic.

BRAZIL
The Anointed
Can a former political radical lead Brazil through its economic boom?

BEING THERE: SÃO PAULO

Fireworks off the coast of Cuba

GUATEMALA
Police Bust Guatemala-Jordan Sex Trafficking Ring
Guatemala has announced the dismantling of an international human trafficking ring that lured young Guatemalan women to Jordan, where they were forced to work in prostitution.

HONDURAS
City building
Hong Kong in Honduras
An ambitious development project aims to pull a Central American country out of its economic misery. Can it work?

A FAST & FURIOUS STATE OF MIND

Mexico, a Country in Crisis, Needs a Fix the Size of the Marshall Plan
When a member of the Qaddafi family wants to make your country his new home, you know things are rotten. But Mexicans knew that already. They also know that the corruption, murder, and economic failure they live with won’t be cured by government posturing and a useless ‘war on drugs.’

Iran in Mexico and the Caribbean: Building a Strategic Trampoline towards the US

VENEZUELA
A preview of October 7, 2012 (or how fascism does not lose elections)

But this year, Dr. Ferrer needs our help. We must pick up his banner and demand human rights for Cuba.

We must demand the end of tyranny.

And we must demand the release from prison of Dr. Darsi Ferrer.

Go to the above link and read the rest.

UPDATE
Snapped Shot is posting on how the AP captions don’t match the story: Caption Does Not Compute