Yes, the World Cup is front-page news on every newspaper in the hemisphere.

ARGENTINA
Argentine VP Defends Self Before Judge in Corruption Case

Note From the Pro-Cuba, Anti-Castro Lobby

IMMIGRATION
JAN BREWER: MS-13 GANG MEMBERS COULD BE CROSSING BORDER WITH CHILDREN; I’d actually be surprised if they weren’t.

The proposed removal from the administration’s budget and appropriations request for next fiscal year of a provision instructing the Secretary of State not to seek the prior approval of host governments when funding nonprofits and civil society groups overseas is infuriating American democracy-promotion and human-rights activists, who argue the omission marks a retreat in U.S. leadership.

They warn the Obama administration is in effect signaling to repressive regimes that they can dictate where U.S. democracy-promotion and human rights money goes in their countries—a problem the provision introduced a decade ago was meant to combat.

PUERTO RICO
The results of the welfare state: Some 68% of Babies in Puerto Rico Born to One-Parent Households

Can we get a grand unified theory of political physics for Venezuela?

Venezuela: The Protesters’ Power Is Rising

TalCual: Repression vs. Inflation
On Tuesday, a group comprised by 9 human rights NGOs released their own figures. These showed that Nicolás Maduro has repressed 485% more than his predecessor, while inflation may exceed 70% by the end of this year

The week’s posts and podcast:
Immigration: And I still ask, who’s organizing this?

Brazil: Who made out from the #WorldCup money?

Ecuador: The bond and pony show

At Da Tech Guy:
The case for harmless escapism

Immigration and the new vulnerabilities of fundamental transformation

Podcast:
Kids on the US-Mexico border & other US-Latin America stories of the week 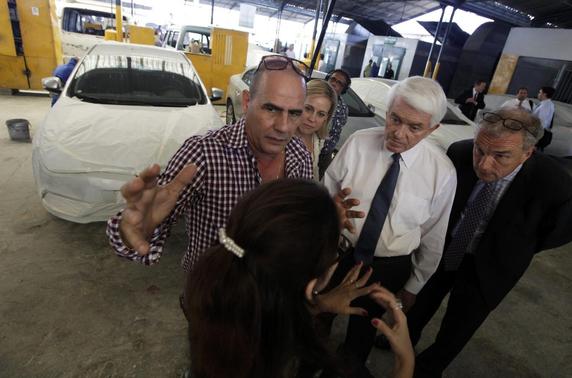 The Miami Herald reports on Panamanian businessman Nessin Abadi, in his early 70s and owner of the large Audiofoto chain of electronics stores
, jailed without charges in Cuba for over a year, like many others,

Few of those cases “have been reported in the press and there are many more in the system than is widely known,” [Stephen] Purvis wrote. “As they are all still either waiting for charges, trial or sentencing they will certainly not be talking to the press.”

Purvis also appeared to indicate that Cuba targeted certain businessmen in order to make room for deals with businessmen from other countries that are more politically in tune with Havana and may not push so hard for their debts to be paid.

Purvis wrote to The Economist that the jailed businessmen are from several countries, “although representatives from Brazil, Venezuela and China were conspicuous by their absence.”

Stephen Purvis’s company, as you may recall, Coral Capital, was behind the Bellomonte Golf and Country Club development, which lost £10.6 million. He spent 16 months in jail and was released last July, along with Amado Fakhre, who was the company’s executive director.

The Herald mentions others,

Canadian Sarkis Yacoubian was sentenced to nine years in a prison in June even though he cooperated with authorities in detailing a corruption scheme that also brought down several government officials. His cousin and business partner, Krikor Bayassalian, a Lebanese citizen, was sentenced to four years in prison.

Still awaiting trial is another Canadian, Cy Tokmakjian, who like Yacoubian sold transportation and other equipment to the Cuban government. He was arrested in 2011.

Abadi is not the first Panamanian businessman to run afoul in Cuba.

Alejandro Abood, then 50, was arrested in Havana in 2001 in what an El Nuevo Herald report at the time described as a roundup of Cubans and foreigners suspected of spying activities close to the offices of then-ruler Fidel Castro.

Purvis asserts that “there are many more in the system than is widely known.” You can read his letter to The Economist here.