Though Mrs. Kirchner won one of three Senate seats at play in the province, her failure to best Mr. Bullrich will likely embolden her Peronist rivals, many of whom support Mr. Macri and don’t want her to seek the presidency again.

Fernandez’s second-place showing still grants her one of the province’s three Senate seats under Argentina’s list system. One third of the Senate and half of the house were elected, and Macri’s coalition will not have a majority.

As I understand it, this means that, even when she’s not head of the Peronists, she gets immunity from prosecution as long as she is a Senator. 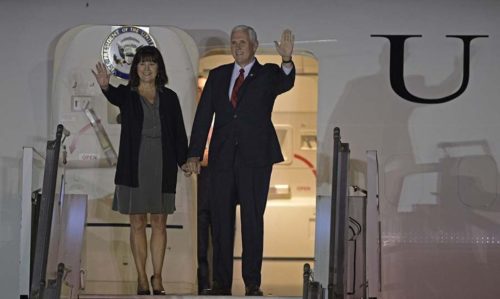 Colombia is one of the United States’ closest allies in the Western Hemisphere, yet, as he stood next to Pence, Santos denounced Trump’s threat of military action, and told the visiting vice president that such a possibility “shouldn’t even be considered” and would be “unacceptable.”

Mr. Pence replied that the U.S. was confident that peaceful solutions could be found, and that Mr. Trump’s remarks on Friday had merely reflected his resolve to address the situation.

Mr. Pence arrived in Buenos Aires the day after the primary:

The nationwide primary, where voters cast a single ballot for their choice among a raft of candidates from each party, determines which parties are eligible to run for midterm congressional elections in October, providing an indication of voter preference ahead of the midterms.

With more than 97% of votes counted early Monday, Mr. Macri’s Let’s Change coalition beat opponents in half of Argentina’s provinces, dealing a setback to former President Cristina Kirchner’s plans for a political comeback.

Cristina came in second, but

Although Kirchner lost Sunday’s vote, she can still win a seat in October. In Argentina’s Buenos Aires province, the party of the first-place finisher wins two seats and the second-place finisher gets one.

This may be unlikely; Macri’s Cambiemos coalition beat opponents in half of Argentina’s provinces,

not only in Buenos Aires but also in Argentina’s four other most-populated provinces, including Cordoba, Mendoza and Santa Fe. They also won in San Luis, which has for decades been dominated by the Peronist Saa family.

Argentina’s peso rallied 3.2% Monday morning, its best gain of the year. Its stock market, the MERVAL, gained 3.6% after opening, one of its best rallies of the year.

Pence arrived at the right time.

Over in Argentina, former president Cristina Fernández de Kirchner, who came to power when her husband Néstor Kirchner died suddenly of a heart condition, sees a storm is threat’ning.

Anything to get immunity:

Cristina Kirchner Files Candidacy Papers for Argentina’s Senate. Senate race would be seen as a referendum on ex-president’s populist legacy and her successor’s market-friendly policies

Former President Cristina Kirchner filed papers on Saturday to run for Argentina’s Senate, launching a campaign that could, if elected, give her congressional immunity from federal prosecution for alleged money laundering and racketeering during her presidency.

About those three separate federal cases that she’s already been indicted,

In one case, a judge ruled that Mrs. Kirchner ran a criminal “gang” aimed at profiting from the illegal disbursal of government funds for infrastructure projects. In another case, she was indicted over accusations she ordered Argentina’s central bank to illegally trade derivatives, costing the country about $5.5 billion.

If Mrs. Kirchner wins in October, she would be eligible to run for the presidency again in 2019, when Mr. Macri finishes his first four-year term.

One can only hope there are not enough stupid people to vote for her. She only needs 25% or so to get a Senate seat, according to the above article.

Alberto Nisman was found dead from a shot in the head in his Buenos Aires apartment on January 18, 2015.

His death has now been declared a murder:

Nisman was found dead one day before he was due to present a complaint to the Argentine Congress accusing leading politicians, including former President Cristina Fernandez de Kirchner, of colluding with Tehran to cover up Iranian culpability for the atrocity. A team of investigators appointed by the Kirchner government concluded — following a controversial investigation that was heavily criticized by Nisman’s family — that the special prosecutor committed suicide using a gun supplied to him by Diego Lagomarsino, a computer specialist employed by Nisman.

But a new report from the Gendarmeria, a federal security force, will put the suicide theory to bed once and for all and show that Nisman was murdered, according to Argentine news outlets. The report’s publication is expected within the next thirty days, the Clarin newspaper said.

Eamonn MacDonagh asserts that this is a major development; long-time readers of this blog know that the case was being investigated as a suicide.

Much as Nisman himself experienced when he began investigating the accusations that President Kirchner had engaged in a cover-up of Iran and its Hezbollah proxy’s responsibility for the AMIA bombing, [prosecutor Eduardo] Taiano has also received threats and warnings not to pursue his inquiries. One text message he received in December last year told him to “stop f__g about with that son of a b__ Jew,” a reference to Nisman, and added, “your days are numbered.”

The complaint Nisman had been due to announce would have implicated Kirchner, former Foreign Minister Hector Timerman and other officials in negotiating a secret pact with the Iranians to absolve Tehran of the AMIA bombing. Nisman’s tenacious investigation — including a log of more than 4,000 monitored phone calls — strongly suggested that in doing so, Kirchner and her colleagues were trying to cover their tracks.

The article points out that “MacDonagh cautioned that numerous “legal roadblocks” could still be placed in front of the Nisman investigation.”

On her part, Cristina Kirchner announced that she’s willing to run for senator. It’s not clear whether, if elected, the post would grant her immunity from prosecution on any charges related to the Nisman murder case itself, or from charges arising from Nisman’s investigations. 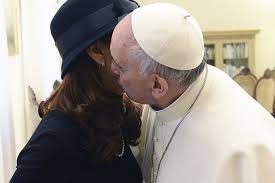 Former president Cristina Fernández de Kirchner, along with her children, has been charged with money laundering. When the news popped up last week, I thought it was an old news item.

It is, and it isn’t: This is the fourth time she’s been charged with money laundering.

Argentina ex-President Cristina Kirchner has been criminally charged for the fourth time, and her passport has been confiscated. The latest charges stem from alleged money laundering in real estate ventures.

I guess she won’t be dropping by the Seychelles any time soon now that they took her passport (link in Spanish). DW continues,

Kirchner, who served as president from 2007 to 2015, already faces trial in a separate case for alleged financial mismanagement in office.

It is the fourth set of criminal charges to beset the former president. Judge Claudio Bonadío said Kirchner was criminally responsible for being part of an illicit association, which she headed, and involved in laundering assets of illicit origin. The charges were aggravated by the fact that Kirchner was a government official and was involved in negotiations incompatible with her position as president, the judge said.

Also charged were Kirchner’s two children, Florencia and Maximo, who is currently a member of congress. Businessmen Cristobal Lopez and Lazaro Baez were also prosecuted as head of a company set up by the Kirchners which owned several hotels in Santa Cruz province.

The latest investigation turned up fourteen houses she “never declared” to the anti-corruption or the tax authorities. (How does one manage that, I wonder?)

In addition to the money laundering cases, let’s not forget that Cristina has pending charges for allegedly ordering Argentina’s central bank to illegally trade derivatives, which cost the country $5.5 billion.