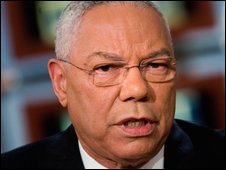 Powell endorses Obama for president as a “transformational figure”, but won’t campaign for him:

I have a couple of questions:
1. Is anyone surprised about the Powell endorsement?

2. What the hey are “transformational qualities”?

3. Aside from the identity politics aspect, how valuable is this endorsement to those who’ve spent the last seven years screaming “Bush lied”, considering how Colin Powell was the guy who went to the UN and could not be belived or trusted? Or does an endorsement of The One make one instantly believeable and trustworthy – a “transformational quality” indeed?

4. As a former head of the Joint Chiefs of Staff, does Powell sincerely believe that an Obama presidency with the Democrats in control of a liberal supermajority and a media that’s hostile to the military will actually be good for the men and women in the Service, particularly in a declining economy?

UPDATE
Roger answers question #2:
Is Obama a “transformational figure”? You don’t know the half of it!

I agree with Gen. Powell that Obama would be a “transformational figure.” But what sort of transformation are we talking about? The United States is the richest, freest, most powerful nation in history. What would it look like after Obama, abetted by a Pelosi-Reid Congress, got done with their transformation?

In a recent editorial, The Wall Street Journal toted up some of the ways the country would be likely to change were Obama elected with the expected left-wing filibuster-proof super-majority. Caveat emptor: this election is no ordinary choice-among-basically-similar political moderates. It is a choice between a liberal, idiosyncratic Republican and an activist left-wing crusader.