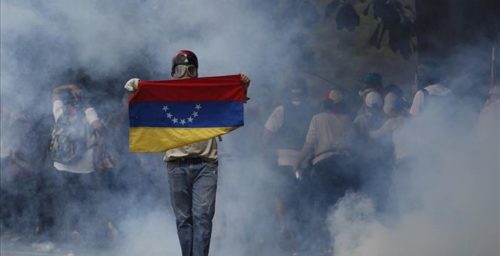 Demonstrations for and against the regime scheduled for today, the anniversary of Venezuela’s 1810 independence from Spain.

As The Guardian put it, Venezuela braces for the ‘mother of all protests’ as both sides call for rallies.

In anticipation, Maduro announced that the popular militia has added another 50,000 members (link in Spanish) – to an estimated total of 500,000. The regular armed forces total 160,000 with army reserves of 25,000, according to Clarín (see their FB video).

Hugo Chávez created the so-called popular militia in 2010 (allegedly with Iran’s assistance), to defend the “socialist revolution.” I have posted in the past about the deadly colectivos, the government-sponsored marauding motorcycle gangs doing the dirty work. They and the military are the only ones allowed firearms.

Additionally, the regime summoned all government employees to congregate in front of the presidential palace,

Will today’s demonstrations have any lasting effect? Or instead

Venezuelans will be doing something that feels historic, but the expectation that we can agree on its meaning either now or in the future seems misplaced.

“NOW Venezuelans throw themselves into the Guaire river upon the GN’s repression on Francisco Fajardo highway.”

Maduro unleashes the colectivos of war.
(Colectivos is one of the names for the marauding motorcycle gangs I’ve written about in the past.)

But the recent protests under President Nicolás Maduro have thrust them into a far more prominent role, say human-rights groups and opposition members. Among their concerns is that the civilian groups, while loyal to the government, aren’t explicitly under its command, and can largely act as they please.

No colectivo leaders have been arrested.

Maduro uses the colectivos not only to attack Venezuelans, he also uses them for propaganda purposes: “If the gringos invade us, the colectivos will swallow them live.” So much for the Obama administration’s smart diplomacy.

The colectivos attacked nearly a third of the protests staged in March, and of their leaders, José Pinto, head of the Tupamaro Revolutionary Movement, was at the “peace negotiations” last month at Maduro’s invitation:

Tracing their origins to the urban leftist guerillas of the 1960s, armed civilian groups faithful to Venezuela’s populist government grew in power under Mr. Chávez, who was accused by opposition leaders of arming civilian groups in his 14 years in power.

There are now in Venezuela roughly a dozen major armed civilian groups, with 2,000 to 3,000 members, said Javier Ciurlizza, Latin America director for the International Crisis Group, a Brussels-based organization that does in-depth reports on conflicts world-wide, including here.

They also act as Chavismo enforcers:

the society of motorbikes is a creation of chavismo who has subsidized them heavily in the early years because they were their storm troopers to quickly go around town to crush any anti Chavez protest. Remember Lina Ron? Now they are out of control, a threat to regime itself. One shudders at the idea that suddenly 300 bikes could appear in a neighborhood and start looting while the cops look helpless. Because they are armed, you know, the bikers, better than the cops probably.

Pay close attention to the language in which their main conclusions are presented (emphasis is mine):