The airplane crash that killed all but three of Brazil’s Chapecoense soccer team:
Doomed LaMia Flight’s Engines Began Shutting Down Several Minutes Before Crash. Colombian officials say pilots didn’t warn of total fuel loss until it was too late

Investigators from Colombia’s Civil Aviation Authority said the pilots didn’t report “a total electric failure without fuel” until two minutes before the aircraft collided at 145 miles an hour into a hillside just outside Medellín, Colombia on Nov. 28. While the crew had asked for priority landing, they didn’t indicate imminent danger and investigators said the pilots spoke with controllers “in a completely normal manner.”

The 28-day investigation found that the Avro RJ85 aircraft left Bolivia nearly 1,000 pounds overweight and flew at an altitude above 30,000 feet, even though the plane isn’t designed to travel above 28,000 feet, Mr. Bonilla said.

In addition, the flight’s 1,839-mile trip was near the aircraft’s capacity for a tank of fuel, the Colombian official said. “The flight crew was conscious of the fuel limits and that they did not adequately have what was needed,” Mr. Bonilla said, adding that headwinds may have caused the aircraft to use more fuel.

Another plane was given priority to land due to a fuel leak.

The LaMia pilot had been warned before taking off from an airport in Bolivia that he might not have enough fuel.

Bolivian authorities accused Ms. Castedo of “failing to carry out her duties as a public official” in not preventing LaMia flight 2933 from leaving the city of Santa Cruz on Nov. 28. The flight subsequently ran out of fuel and crashed near its destination of Medellín, Colombia, killing 71 people including most members of the Brazilian professional soccer team Chapecoense.

The airline’s final flight plan was in violation of international aviation safety standards, as it didn’t include a refueling stop despite the 4 ½ hour trip stretching the Avro RJ85 aircraft’s flight range.

Ms. Castedo had requested the plan be changed, according to a transcript of a conversation with the plane’s onboard dispatcher that she wrote up after the crash. She said the dispatcher, Alex Quispe, who was among those killed in the crash, dismissed her concerns.

Her employer, Aasana, claims that investigators need to look at DGAC, another of Bolivia’s regulatory agencies, to understand why the flight plan was approved.

Castedo was granted temporary asylum allowing her to live and work in Brazil while the Justice Ministry analyzes her case.

Medellin’s Atletico Nacional, which Chapecoense was scheduled to play , had made the request, and

Chapecoense will be given the $2m (£1.57m) in prize money while Atletico Nacional will receive $1m (£787,000).
. . .
The small Brazilian city of Chapeco held a massive funeral on Saturday after the victims’ coffins arrived home, each draped in the club’s green and white flag. While 13,000 people have applied to become club members in the just two days.

Bolivia’s aviation authority has suspended the operating licence of LaMia, the charter airline whose plane crashed on Monday killing 71 people.

It was LaMia’s only operational plane, and had been part-owned by the pilot.

The aircraft carrying Brazil’s Chapecoense football team went down near Medellin, Colombia. There were only six survivors.

Why the Chapecoense football team’s plane ran out of fuel

According to O Globo, a Brazilian news outlet, the first leg of the journey from São Paulo to Santa Cruz de la Sierra was delayed by around one hour. That meant that the refuelling stop in Cobija was not possible, as the airport there shuts down at night. So, the pilot opted to fly directly from Santa Cruz de la Sierra to Medellín.

That decision has become the subject of tremendous scrutiny. The range of the plane model, a British AVRO RJ-85 jet, is 2,965km with a full tank of fuel, according to JACDEC, an air-safety website. That is less than the distance between the two airports. Global civil-aviation regulations state that any plane flying internationally must carry enough fuel to make it to an alternate airport, and enough to fly for 30 minutes after that. And yet somehow, the plane was on course to arrive safely. Mr Quiroga had requested for priority to land with air-traffic control, but he was rebuffed: another plane had a fuel leak and needed to land first. Only after that, when the jet had already begun to descend, did he declare an emergency.

It is not clear how or why the last-minute change in flight plan was approved. According to El Deber, a Bolivian newspaper, airport officials in Santa Cruz de la Sierra raised several questions about it. Mr Quiroga reportedly made various verbal guarantees that the plane had enough fuel for the trip.

Then there’s Occam’s razor: the owner was cutting corners. 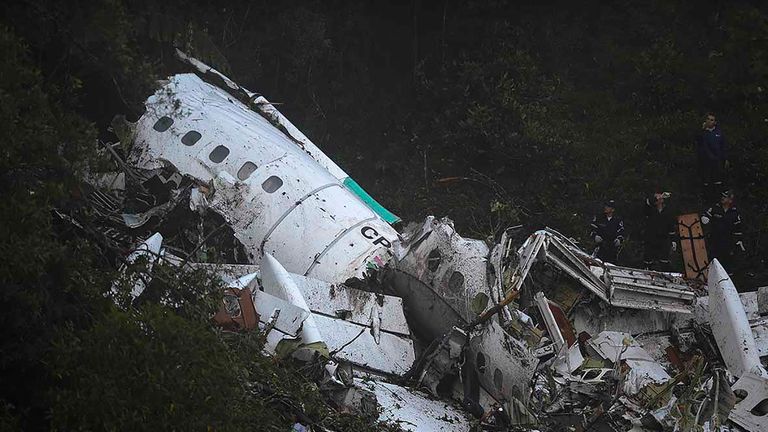