Article sent by three friends on how the dissidents that the Communist regime has allowed to travel have been met by their Miami compatriots:
Dissidents Find ‘Cuba Outside Cuba’ in Miami

When Cuban hunger striker Guillermo Farinas arrived in Miami, he said he was prepared to face rejection from radical members of the Cuban-American community who do not believe in pacific opposition.

The reaction has been far different. When he went to the Versailles restaurant, a traditional gathering spot for older exiles in the city’s Little Havana neighborhood, he was embraced. During an event at Miami’s iconic Freedom Tower, he was applauded.

“The love the exiles in Miami have shown us makes us discard what the government, over 54 years, has planted in our minds,” he said.

While you’re at it, if you understand spoken Spanish, listen to Jaime Bayly’s interview with Berta Soler,

Parts 2, 3 with Laura Maria Labrada and Belkis Cantillo (also in the photo above), and 4.

Havana in Black and White
Dissident Berta Soler takes a big risk by telling the truth about racism and repression in Cuba.

Now Ms. Soler is taking advantage of the dictatorship’s new travel policy—that for the first time in a half-century allows Cubans to take trips abroad—to ask the international community for “moral and spiritual support” for the Cuban people in their struggle against the dictatorship.

She wants the world to know of Castro’s racism. Blacks, she says, are grossly underrepresented in the universities and overrepresented in prisons. “The beggars in Cuba are black, not white. The marginalized are blacks, not whites.” She adds: “They tell me ‘Negra, what are you doing? You have a lot to thank the revolution for!'”

Repression is on the rise, and in the absence of international condemnation the regime feels free to administer publicly the beatings the Ladies in White endure in order to show who’s boss. The regime used to send women only to attack the Ladies but now they send men as well. They punch the Ladies with the clear intent to hurt them. They sometimes break bones.

Ms. Soler says that these attackers “never have been neighbors” spontaneously defending the glorious revolution. They are professionals working for the Interior Ministry or civilians who obey the regime in order to keep their jobs or their place in university classrooms. Ms. Soler says that for the past two years many of “the same faces” have consistently shown up to attack the group. The woman who bit Laura Pollan is well known by the Ladies because she is a regular on the goon squad and works for the ministry.

It is chilling to think what might happen to the politically incorrect Ms. Soler when she returns to Cuba, which is what makes her trip to Rome this week so crucial.

Lady in White Belkis Cantillo was beaten, arrested, and taken away the week after returning to Cuba.

She has asked to see Pope Francis. If he agrees, the visit might protect her. Without it, and in the absence of other influential international voices coming to her defense, her fate is less certain.

I’m not counting on the Pope.

Too bad Beyonce and Jay-Z couldn’t drop by, though. 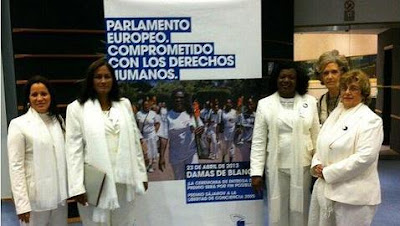