Ousted Honduran President Manuel Zelaya will end his four-month refuge in the Brazilian embassy and leave the country next week, when his term would have ended, his closest adviser said on Thursday.

Zelaya, a leftist who was ousted in a coup on June 28, accepted an agreement backed by the government of the Dominican Republic to travel to the Caribbean country, close Zelaya aide Rasel Tome told Radio Globo radio.

What a guy: Specter tells Bachmann to “act like a lady”

Scott Brown went out and made the case for enhanced interrogation, for denying terrorists the rights of criminal defendants, for detaining them without trial, and for trying them by military commission. It worked. It will work for other candidates willing to get out of their Beltway bubbles.

Victor Davis Hanson on Our Philosopher-King Obama
He doesn’t mind pushing noble legislation that most people oppose. Why is that?

Why, then, does the Obama administration persist with such an apparently unpopular agenda?

Like Plato’s all-knowing elite, Obama seems to feel that those he deems less informed will “suddenly” learn to appreciate his benevolent guidance once these laws are pushed through.
…
There is one other trait of this administration similar to those of utopian philosopher-kings. Our elite must have the leeway to be exempt from their own rules.

Michael Fumento asks, Why does everybody think BPA is safe but us?

Meanwhile he shamelessly promoted his wife’s book which aimed to rehabilitate him. Saint Elizabeth and the Ego Monster, indeed.

The National Enquirer is submitting its John Edwards coverage for a Pulitzer Prize. Can’t wait for Oprah to reunite John with all his children!

BONUS
Top 10 Craziest Things Ever Said By Pat Robertson; here’s the one about spooky yoga:

Or maybe he means Yoda? “Sen. Reid assured me that I would keep my committee assignments and that I would have the same seniority as if I had been elected as a Democrat in 1980,” Specter said. “It was understood that the issue of subcommittee chairmanships would not be decided until after the 2010 election. Some members of the caucus have raised concerns about my seniority, so the caucus will vote on my seniority at the same time subcommittee chairmanships are confirmed after the 2010 election. I am confident my seniority will be maintained under the arrangement I worked out with Sen. Reid.”

What was that about the three biggest lies, “I’ll respect you in the morning”, “the check is in the mail,” and…?

Sen. Arlen Specter, Pennsylvania Democrat, said part of the reason he left the Republican Party last week was disillusionment with its healthcare priorities, and suggested that had the Republicans taken a more moderate track, Jack Kemp may have won his battle with cancer.

Mr. Specter continued: “If we had pursued what President Nixon declared in 1970 as the war on cancer, we would have cured many strains. I think Jack Kemp would be alive today. And that research has saved or prolonged many lives, including mine.”

Going by that logic, then the Republicans saved your life, Arlen? 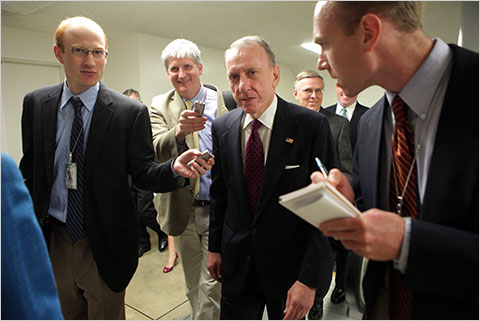