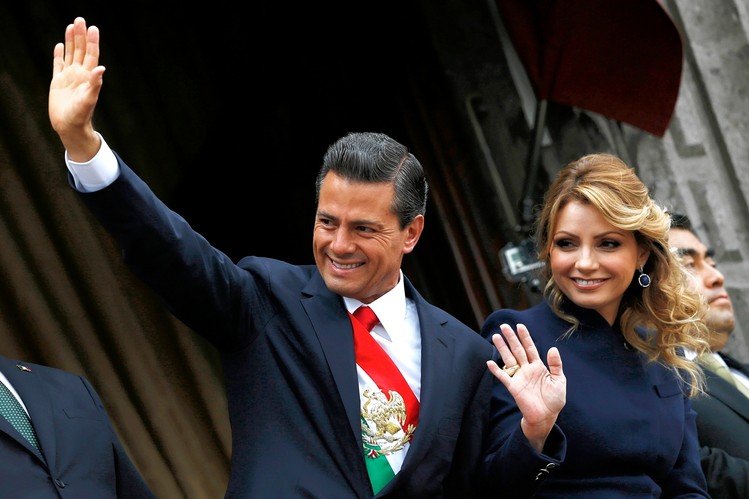 The latest hashtag, #Articulo39RenunciaEPN (say that fast three times!) refers to a corruption scandal, and twitterers are asking that president Enrique Peña Nieto resign,
Mexico Leader’s Woes Follow Him to China
Revelations that a mansion used by President Enrique Peña Nieto’s family was held by a Mexican company whose owner has won big government contracts reverberated from Mexico to China on Monday. (emphasis added)

The president’s office defended the home by saying it wasn’t the president’s property, but rather the first lady’s, who was paying the home in installments. It declined to give more information.
. . .
As the president flew to China for trade talks he faced controversy there as well.

A Chinese partner of the Mexican company, Grupo Higa SA, threatened to pursue legal action against Mexico’s government after it abruptly canceled their consortium’s $3.7 billion contract to build a bullet train in Mexico last week.

“The company is extraordinarily shocked by Mexico’s decision,” state-run China Railway Construction Corp. said in a statement late Sunday. “The bidding for the high-speed rail project complied with the requirements of the Mexican government.”

The Mexican government canceled the concession for the high-speed train project Thursday, days before news broke that one of the partners on the project held the title to the first lady’s home.

The house title is in the name of a company called Ingenieria Inmobiliaria del Centro, according to property records reviewed by The Wall Street Journal. That firm is owned by Juan Armando Hinojosa Cantú, the owner of Grupo Higa SA and its unit Constructores Teya, which won part of the bullet-train contract as well as several big contracts during Mr. Peña Nieto’s 2006-2012 term as governor of the State of Mexico, according to public information.

Eduardo Sánchez, a spokesman for the president, told The Wall Street Journal that the home in question, which has six bedrooms and is in one of Mexico City’s most exclusive neighborhoods, belongs to the first lady, Angélica Rivera, a former soap-opera star.

Which gives new meaning to the term “drama queen.”

Pardon my cynicism, but I’m having a Capt. Louis Renault moment,

There’s a candle vigil/demonstration scheduled for tonight at 7PM,