In a tweet following the meeting, Pastrana thanked Trump for the “cordial and very frank conversation” about problems in Colombia and the region.

Uribe was unavailable for an interview, but his former vice president, Francisco Santos, said it was important that the Trump administration and U.S. Congress hear a more complete picture of the reality in Colombia. He described the meeting as short, but with a clear message. The former presidents raised concerns about the situation in Venezuela and Colombia, including damage they say the peace process has caused.

“We’re very worried,” said Francisco Santos, who is the Bogotá chair of Uribe’s Democratic Center political party and the current president’s cousin. “You have a perfect storm, and the government says everything is going fine and we’re living in peace. And that’s not true.”

The Mar-a-Lago meeting coincided with a letter Uribe wrote to the Trump administration and Congress, which he published on Twitter, warning that President Santos’ efforts to complete a peace deal with the rebels could lead to Colombia becoming an authoritarian state similar to Venezuela.

Message to the authorities and the Congress of the United States of America… https://t.co/U1THc37vYn

Related:
Prior posts on the FARC and the peace agreement. 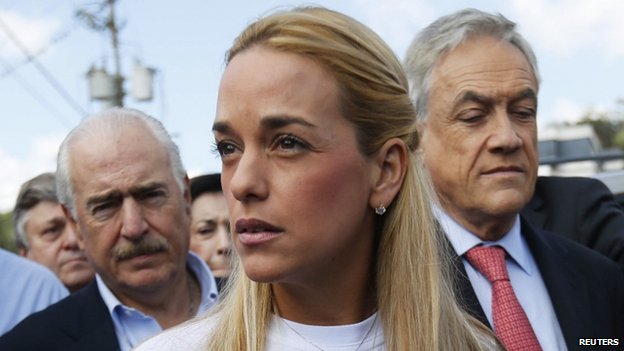 The Venezuelan government has turned down a request by former presidents of Chile and Colombia to visit opposition leader Leopoldo Lopez in jail (h/t HACER). Mexico’s former president Felipe Calderón would also been turned away, creating An impossible to avert PR mess for Maduro

Piñera and Pastrana have now a first hand account, a direct witness position on repression in Venezuela. They saw the Nazional Guards everywhere, they were both somewhat threatened by diverse hecklers and possibly by “security”, they experienced personally the harshness and autism of the regime, etc, etc.

Maduro then doubled down and accused Piñera and Pastrana of enriching themselves from drug money (as if Piñera needed the money). This is particularly offensive to Pastrana, who was held prisoner by Pablo Escobar 27 years ago.

Pastrana, on his part, scored a dig or two on Maduro, referring to him as “my fellow countryman”, since Maduro may have been born in Colombia – which would disqualify Maduro from being president of Venezuela (video in Spanish),

Pastrana points out that he and Piñera went to the Ramo Verde jail on the regular visiting day, when no permits are required to see the inmates.

Just another day in the Communist Bolivarian Revolution.