Cynics point to the massive spending for Olympics games in third world countries at times like this, and see wasteful spending, mismanagement and continuing problems:
From Olympic pool to mosquito swamp: the Rio 2016 debacle. Five months after Brazil Games, infrastructure has been abandoned and authorities appear paralyzed

Five months after the torch was snuffed out, there is no trace of the glamour and sense of opportunity brought by sport’s most high-profile event. Whether hosting the Olympics did anything for this city suffering from decadence and economic crisis to justify the massive investment is debatable.

Facilities laid to waste (emphasis added), and not just the pool,

The boulevards connecting the major facilities in the Olympic Park have been open to the public for almost a month but few have bothered to come. City Hall has not kept a log of visitors, but when you consider there is not one fountain or kiosk to provide respite from the 40°C temperatures, it is easy to see why they might have stayed away. Couple that with the fact the heat exacerbates the stench coming from the sewage system which discharges waste into the lake and the mystery is well and truly solved.

Since last August, the Olympic Park has been used for one beach volleyball championship and nothing else. There is no fixed program for sports events and the only other kind of event penciled in is the Rock in Rio music festival in September. 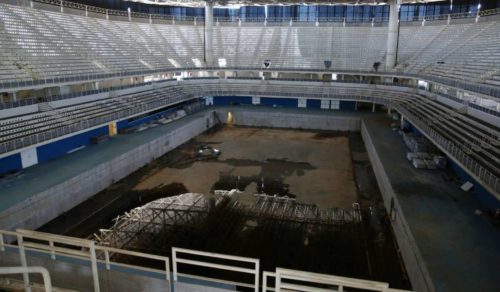 I wonder what became of the sofa.

Former Mayor Rudolph Giuliani’s consulting firm is being hired by the city of Rio de Janeiro to help make the city safe for the 2016 Summer Olympics.

Giuliani visited a slum in Rio on Friday and praised the city’s efforts to bring order to violence-plagued areas filled with drug traffickers.

He says Rio can be a safe city before the Games begin.

The governor of Rio says the firm is being contracted to give security advice. Details of the deal were not disclosed.

Take it away, Peter!