Brazil became a net foreign creditor for the first time this year, inflation dropped to a seven-month low in February and the benchmark interest rate was at a record low 11.25 percent before this month’s increase. The country’s economy probably grew at a 4.8 percent rate last year, the fastest since 2004, according to the median economist estimate in a Bloomberg survey.

Things are looking up.

The big news in Brazil, however, is that soccer star Renaldo got caught with three transvestite prostitutes because of “psychological problems due to his knee injury.”

When it comes to excuses, that’s a new one.

Patria, Vuitton o Muerte! Gastaremos!*
Via Pat, the uniform of the Boliburguesia: Gucci shoes, Vuitton necktie, as worn by the Venezuelan Interior Minister

As they used to say in the old Bally ads, “There’s dressed, and there’s well dressed.”

* Motherland, Vuitton or death, we shall spend!

Right Wing News interviewed Matt – you can read it here. 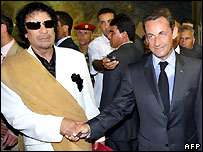 Updated
Right now I’m here at casa de Fausta looking at the TV in the kitchen. Two things are on:
Venus Williams and Marion Bartoli are slugging it out on the court. Great match.
Some girls in tight clothes with thin voices are singing on Live Earth in front of a Definitely.NOT,Carbon.Neutral wall of lightbulbs.

On the one hand, a really good tennis match. On the other hand, a vacuous exhibition of symbolic tokenistic behavior.

You know what I’m watching.

But fret not, Tim Blair and Mark Steyn are covering LE for you.

I’ll be enjoying the beautiful Summer day after the game is over – have a wonderful day!

Update, Tuesday 10 July:
Via The Corner, we might have a consensue

The BBC blamed the poor figures on Saturday’s good weather and said its Wimbledon tennis coverage had drawn away afternoon viewers.

You heard it here first.

The cricket coach was strangled.

Friday fast for all political prisoners and the Ladies In White.

If you establish that the Earth is warming, it doesn’t necessarily follow that we have a moral duty to reduce emissions. What should follow is an informed debate about the costs and benefits of various policies to address that warming – reducing emissions is just one possible answer. Another debate should focus on those policies’ economic costs.

Al Gore doesn’t want to have those debates, because the majority of evidence suggests that emissions reduction will be very costly and will have little effect. Kyoto, fully enacted by all its parties, would for all its cost reduce global warming by a mere 0.07 degrees Celsius by 2050 – a barely detectable amount.

Last night before dinner The Husband (TH) was cooking something in the pressure cooker and sipping on a beer when I (F) said,

F: Did you hear that Russell Crowe says that the rugby team he owns in Sydney quote “has discarded its cheerleaders” unquote this season because they made male fans feel uncomfortable? (h/t PC Watch)

TH: Uncomfortable?
(takes a sip from his beer, looks at cheeleader photo, smiles, has more beer)
More like they made the male fans’ wives uncomfortable.
F (reading from the article): “The Hollywood star also said his wife, Danielle Spencer, supported the club’s controversial move”.
TH: I knew it.
F: They’re replacing the cheerleaders with some sort of marching band. “The whole idea of percussion will be exciting for the crowd”.
TH: Well, the Rockettes do great percussion. I wonder if they travel.

Now, I don’t know a thing about sports. And I certainly don’t know anything at all about football or soccer. So I’m completely amazed that a guy who wasn’t scoring in his last team has just signed a contract for a quarter of a billion bucks. What’s even more amazing is that the guy is referred to as a sex symbol. I kid you not. The TV anchors say, “the superstar and sex symbol” – I just heard one right now.

A sex symbol? He spends more on manicures than I – and I go for a manicure every week!

So it seems to me that the lesson in this is, have a really really good agent.

This weekend, however, my mind is focused on one thing and one thing only – you guessed it. I was visiting Obi’s Sister who’s anticipating Jack Bauer’s return, and, as she puts it,

Even the obscene amount of money offered to pseudo-royal Beckham cannot tarnish my anticipation. After all, if Jack really wanted Beck’s money, all he’d have to do is show up and take it. Like candy from a baby. And he wouldn’t even need a hacksaw.

Did she say, Sir Becks? He was knighted?

Get me that agent – I want to be a Dame!

————————————
NY Times delivery update:
For the first time since I started assertively asking (i.e., stopped paying) the NYT to discontinue weekend delivery, the paper was not on the driveway this morning. Did they finally stop? The real test comes tomorrow. One time they didn’t deliver early on Saturday but they delivered it later. If it’s not on the driveay by then, it must mean they stopped.
————————————
Via Pamela, not a sex symbol but a very sexy performer: Charles Aznavour. Some day I’ll post about the time I saw him on stage, but for now, hear him sing She

What a fabulous guy.