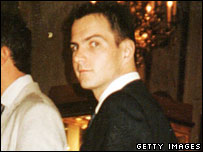 All along I keep asking myself, is he the fall guy?

How can a trader (not a manager, partner or senior partner) who was in profit by nearly $2 billion at the start of 2008 lose that kind of money that fast without anyone noticing, especially when SG was looking into his transactions since last April?

Because of the ridiculousness of French employment laws, SG can’t fire him right now

Société Générale has stopped paying Mr. Kerviel and told him not to come to the office, but it hasn’t managed to formally fire him. French law stipulates that to do that, the bank must first call him in for a sit-down meeting and explain its dissatisfaction. He has the right to bring along a trade-union official, a lawyer or anyone else he’d like.

That will be complicated: A pair of Paris judges this week released Mr. Kerviel from custody but forbade him to have contact with the bank. “This is a very peculiar case,” says Emmanuel Dockès, a law professor at l’Université Lyon 2, Mr. Kerviel’s alma mater in central France.

The article points out that apparently Kerviel didn’t profit personally from all those high-risk transactions over the past two years.

My guts tell me that even if Kerviel didn’t profit, somebody at SG did.

UPDATE
Via Tristan, France in Need of an SEC?